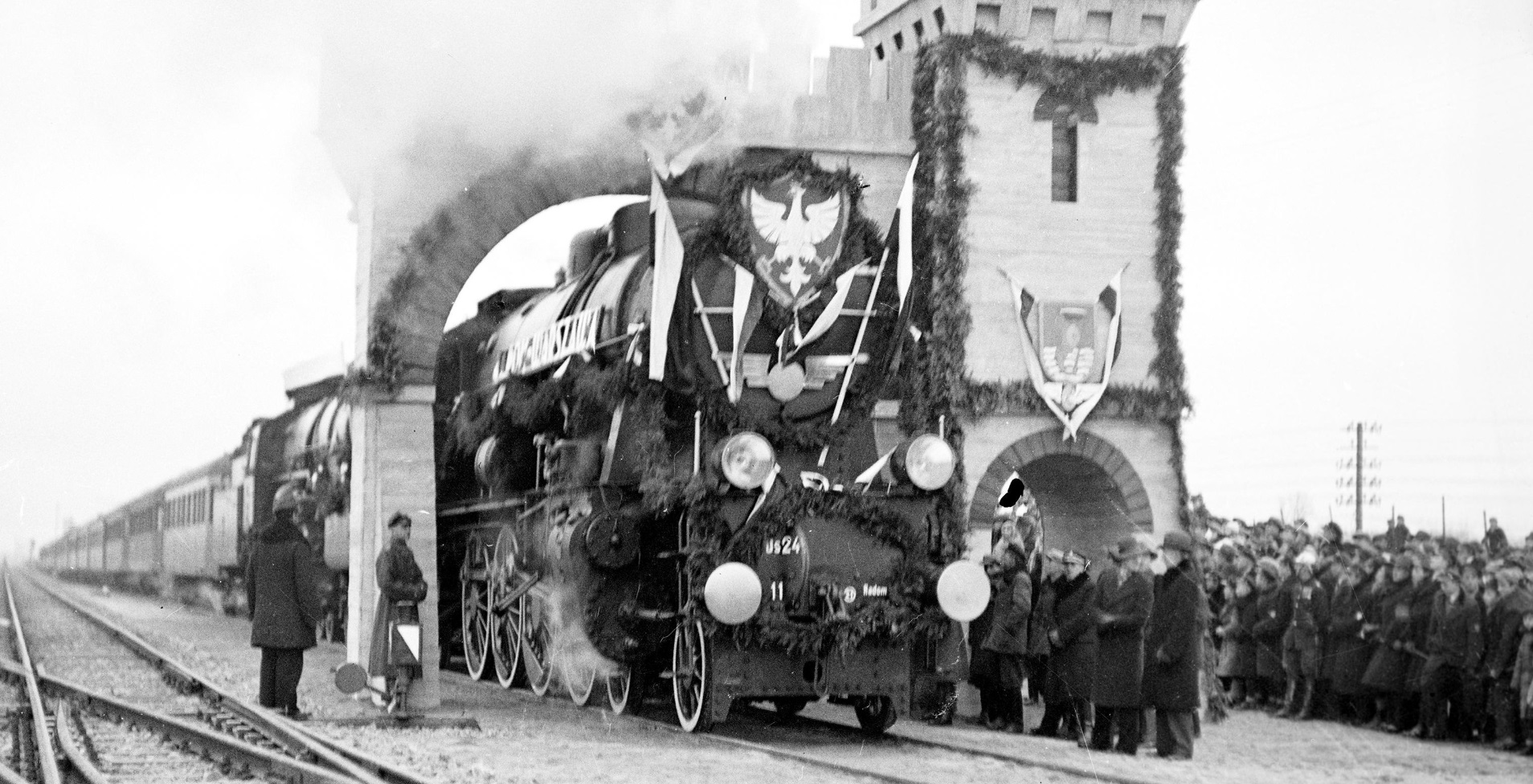 Author: PAWEŁ SZULC 02.02.2021
In the 1930s, railway tourism in Poland began rapidly developing. The young, reborn state was able to pride itself on trains intended for the most demanding passengers. And it was not only the famous Luxtorpeda.

The reconstruction of railway after Poland regained independence was an extremely challenging task. More than half of the stations were destroyed, railway viaducts were ruined. Most of the locomotives taken over from the partitioners were too damaged and train cars were fitted with over a hundred different types of breaks, heating and lighting systems. If that wasn’t enough, the occupants left behind several dozen kinds of train tracks, connected in various ways.

Even though, political groups rarely get along in terms of political, economical and social aspects of life, they were surprisingly unified in their approach to the transport industry. It wouldn’t have been enough to repair the railway infrastructure, it had to be built anew, since there were simply no railway lines from Warsaw to Poznan, Cracow or Lviv. Several hundred locomotives were bought from the West, and then Polish factories began producing them on their own. The crisis, which had left its mark on all branches of the economy, luckily passed and everyone began thinking on increasing the comfort of train travel and the usefullness of this way of transport for tourism.

In spring 1935, on the decision of the minister of transport Michał Butkiewicz, the League for Support of Tourism (LPT) was founded. The goal of the association was the widely understood promotion of tourism, especially in the context of mass use. It was probably due to the fact that the long-time chairman of LPT was the deputy minister of transport, Aleksander Bobkowski, that it was the railway which was to play a key role in the promotion of tourism. That way, the so-called popular trains gained much importance. Since 1933, year in and year out, several hundred special train cars rode out into the world. The idea of popular trains was based on the organisation of  touristically attractive trips for as many people as possible with the least expenses as possible. 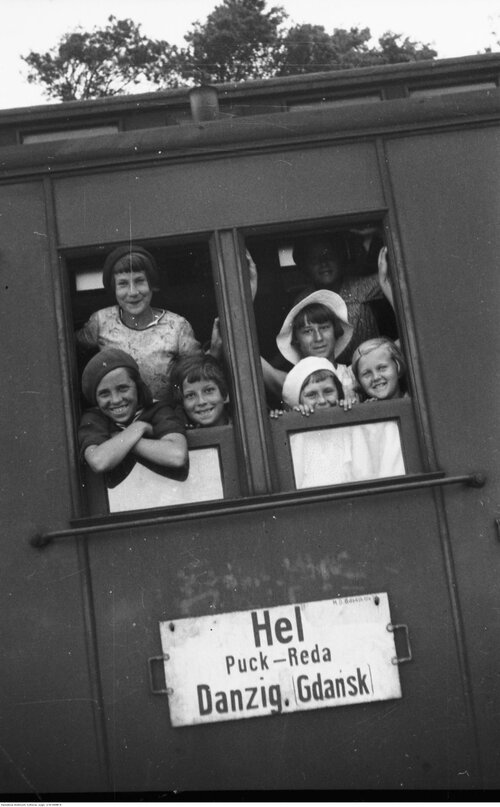 Children in a train connecting Gdynia to Hel, 1934 (NAC) 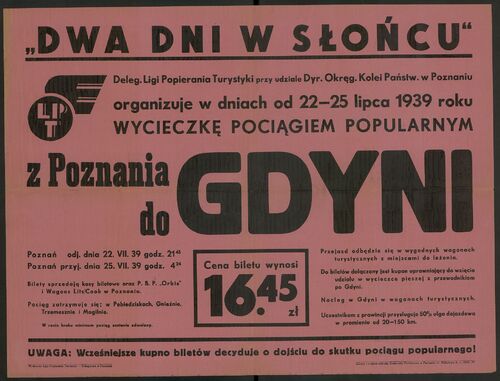 The popular trains went on tours for various occasions and holidays. For example, on All Souls’ Day the trains took off to the Cemetery of the Defenders of Lviv. When international boxing competition took place, fans of this sport had a special train coming from Łódź to Poznan. History lovers took popular trains to get to Lednogóra, so they could visit the early Middle Ages’ cemetery at Ostrów Lednicki. The trains took passengers from Warsaw to special exhibitions: “Interior architecture” and “Woman’s world”. For music fans, there were special tours for the “Week of Polish Music” in Poznan, where they could attend concerts of church, symphonic and chamber music. Special cars also took passengers from Łuck and Kowlo to the metallurgy exhibition in Warsaw.

One of the more interesting ideas of the League for Support of Tourism were the pilgrimage trains. They were the result of the phenomenon first noticed by the Church in the 1930s – the connection between tourism with the centuries-old tradition of travelling to holy sites. At that time, cities like  Częstochowa, Vilnus or Kalwaria Zebrzydowska began to gain popularity among more and more faithful. All because of the railway. Train pilgrimages for the most important religious ceremonies became highly popular. The train tickets on routes Warsaw-Vilnus or Warsaw-Częstochowa cost thirty percent less than normal, and the poorest and disabled could apply for a free ticket. 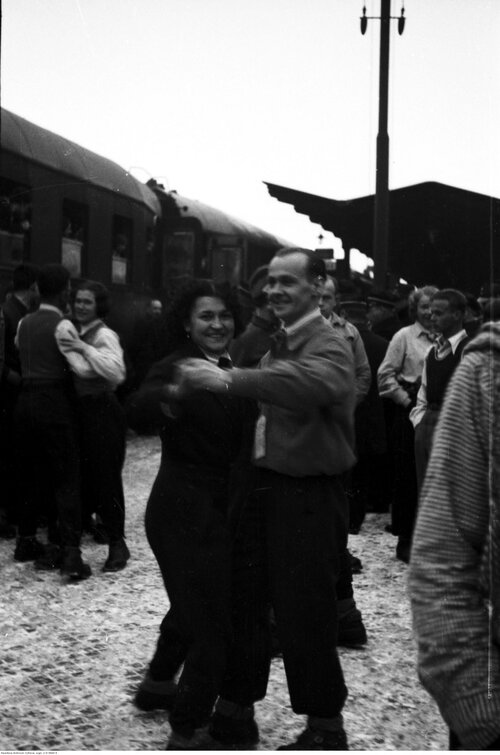 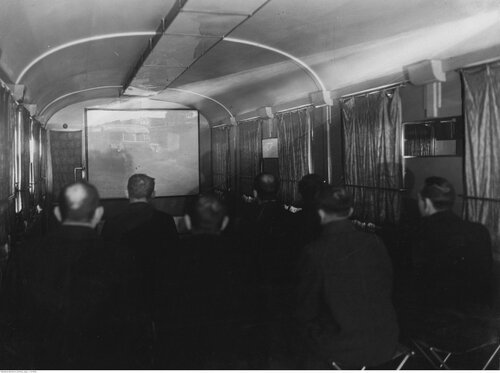 Inside a cinema car, during a screening. Passengers are watching a film, 1936 (NAC)

During the inter-war period in Poland, one train was a very special one. It was the rally ski train. The first one of this kind took off in February 1932. Its journey lasted ten days, and the route itself was 1200 kilometres long, from Worochta (today part of the Ivano-Frankivsk region in Ukraine), through Sławsko, Truskawiec, Sianki, Krynica, Rabka, Zakopane, Zwadroń, up to Wisła. The journey always took place during the night, while during the day the train stopped so its passengers could ski down Polish mountain slopes. Each and every one of the 148 travellers, having paid 200 zloty, had his own bed in the bedroom car, full board, access to the bathing car, cinema car and a special car for bridge games and dancing. The package also included a guide and participation in special events and parties.

The end of luxury

As time passed, the organisation of railway tourism kept improving. The train destinations were meticulously chosen, the passenger service became better and better. In June 1939, the Educational Inspectorate in Mielec organised a popular train for – as it was called – “all those who would like to see the wide world through <<Poland’s Window>> - the city of Gdynia”. Its organisers advertised the trip with: “Get on the train, there might not be another occasion such as this in the future”. They probably had no idea how prophetic were these words. Two months later, Poland was attacked. The biggest conflict in the history of the world broke out. For the next several years, Poles had to forget about terms like tourism, trips or sight-seeing.