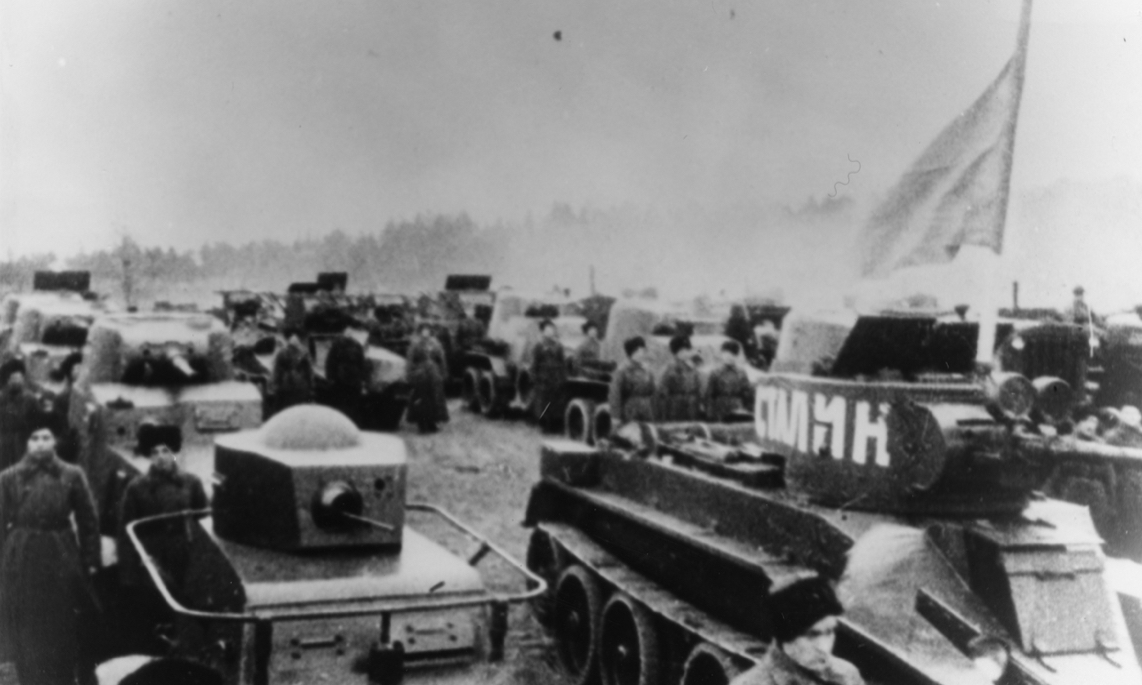 Red Army troops awaiting the beginning of a parade in Białystok, September 1939 (photo from the collections of the Institute of National Remembrance)
POLECAMY
Share
Retweet
E-mail
Artykuł

Author: MAGDALENA DZIENIS-TODORCZUK 21.02.2022
In consequence of the Molotov-Ribbentrop pact between the Third Reich and the Soviet Union, on September 17th 1939 the Red Army crossed the borders of Poland thus beginning the occupation of the eastern territories of the Second Republic of Poland, lasting almost two years.

The preparations for the invasion of Poland began at the General Command of the Red Army at the end of August 1939. On the night from September 16th to September 17th, at 3 am at the People’s Commissariat for Foreign Affairs of the USSR, Polish ambassador Wacław Grzybowski was given a note argumenting the attack on Poland with care for the fate of national minorities living there. The Polish diplomat refused to accept this document. 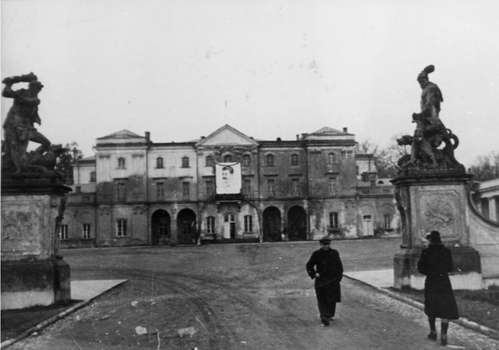 During the next several hours, the Red Army troops crossed the Polish borders.

The first Soviet attack was directed at the watchtowers of the Border Protection Corps, among other places, the watchtowers at Czuryłowo (brasławski region, Polesie province), Szapowały and Polikszty (mołodecki region, Vilnus province) were attacked at around 4.40 am. The Soviets used more than 600 thousand soldiers from military units; moreover, they used 4 700 tanks and 3 300 combat planes. For the needs of the war activities, the War Councils of Special Military Divisions: the Belarusian and Kiev ones, were reformed into the commands of Fronts and given the responsibility to execute the plan of aggression. On the Polish eastern side there were small troops of the Border Protection Corps, Brigades of Reserve Cavalry Wołkowysk and Independent Operational Group “Polesie”, as well as the broken troops of the Polish army retreating after fighting the Germans. 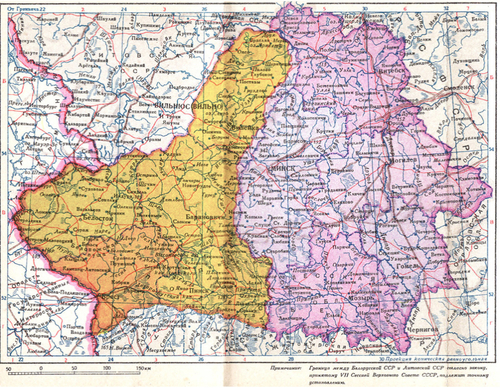 The entering of the Soviet troops to Poland was a shock for the government at the time. Gen. Edward Rydz-Śmigły, serving as the Supreme Commander, gave the general order not to engage at all with the Red Army, with the exception of being fired upon or if the Soviets attempted to disarm the Polish troops, and to retreat towards Romania and Hungary. Despite the enemy’s advantage and the surprise factor, Polish soldiers and citizens showed brave resistance. In many towns, small battles with the Soviets took place, i.e. at Kowlo, Sarny, Baranowicze, Tarnopol. The rank of national symbols gained the defence of Vilnus (September 18-19), Grodno (September 20-21) and even Kodziowce (on the night from September 21st to September 22nd) fought between the regiment of uhlans and the Soviet armoured division, or a two-day battle near Szack (September 28-29) fought between the Border Protection Corps under the command of gen. Wilhelm Orlik-Rückemann. 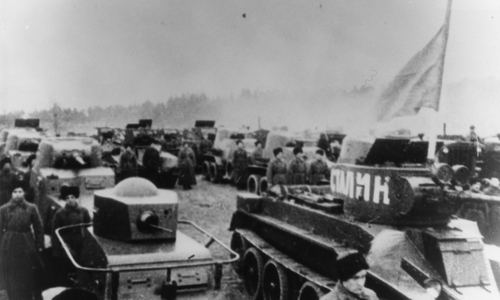 Red Army troops awaiting the beginning of a parade in Białystok, September 1939 (photo from the collections of the Institute of National Remembrance)

The numbers of the Red Army were an overwhelming advantage, so the Soviets moved quickly into Poland taking more and more towns and cities. Already on September 19th 1939, the commander of the Belarusian Front Mikhail Kovalov informed the Polish population through leaflets in Polish and Belarusian that the People’s-Farmers’ Red Army of Temporary Management was being created at the entire taken territory.

From the very moment the Soviets crossed the borders, they began committing war crimes on Polish citizens, especially landowners, military settlers and representatives of the administration of the Polish state.

They consisted of representatives of the Red Army and local population and were to function until the formation of proper authorities. The Soviet troops reached Białystok on September 22nd 1939. The 6th Division of the 6th Cavalry Corps entered the city. The Soviets took power from the German army stationed in the city for two days and made the Braniccy palace their headquarters. The city was decorated with red banners, portraits of Lenin and Stalin. In the next days, under the Soviet occupation came: Osowiec, Rajgród, Sokoły, Grajewo (September 25th), and on the next day units of the Red Army entered Wysokie Mazowieckie, while on September 27th to Czyżew and Zambrowo. Łomża in turn was taken on September 29th 1939.

From the very moment the Soviets crossed the borders, they began committing war crimes on Polish citizens, especially landowners, military settlers and representatives of the administration of the Polish state. Polish soldiers were also repressed. Among others, around 300 defenders of Grodno were shot, just as 150 sailors of the Pińska Flotilla; gen. Józef Olszyna-Wilczyński, the commander of the Regional Grodno Corps no. 3 and his adjutant, artillery captain Mieczysław Strzemeski were executed. 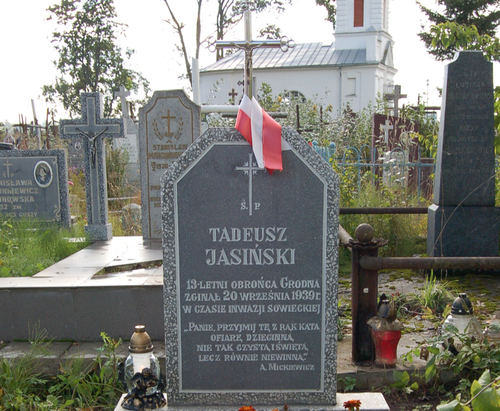 Gravestone of Tadeusz Jasińki, the youngest defender of Grodno (photo by P. Kalisz, from the collections of the Institute of National Remembrance)

On September 28th 1939, in Moscow, a treaty on borders and friendship was signed between the Third Reich and the Soviet Union.

Among the means of repression used by the Soviets were arrests, deportations to gulags, the Katyń Massacre.

The eastern territories of Poland were included in the USSR, except for the Vilnus region. On the basis of the treaty signed on October 10th 1939, the USSR gave the city and region of Vilnus to Lithuania. The remaining territories were joined to the Soviet Union and, according to Soviet terminology, were described as Western Belarus or Western Ukraine. Officially, these territories were joined to the Soviet Union between November 1-2 1939 – on the request of the delegates of the People’s Assembly of Western Belarus and People’s Assembly of Western Ukraine – during the fifth, special session of the Supreme Council of the USSR.

Lasting almost two years, the occupation of these territories by the USSR equalled ruthless terror for the Polish citizens. Among the means of repression used by the Soviets were arrests, deportations to gulags, the Katyń Massacre. The total toll of the Soviet occupation is not yet entirely known today. Historians estimate that only in September 1939 soldiers of the Red Army and members of the operational secret services Cheka murdered 2.5 thousand prisoners and several hundred civilians, while during the two years of occupation at least 800 thousand Polish citizens were sent deep into the USSR (this number includes both POWs, people sent to gulags, deportees, those mobilised to the Red Army, people who decided to work at the USSR or were evacuated with the front when war broke out between the two aggressors in June 1941). 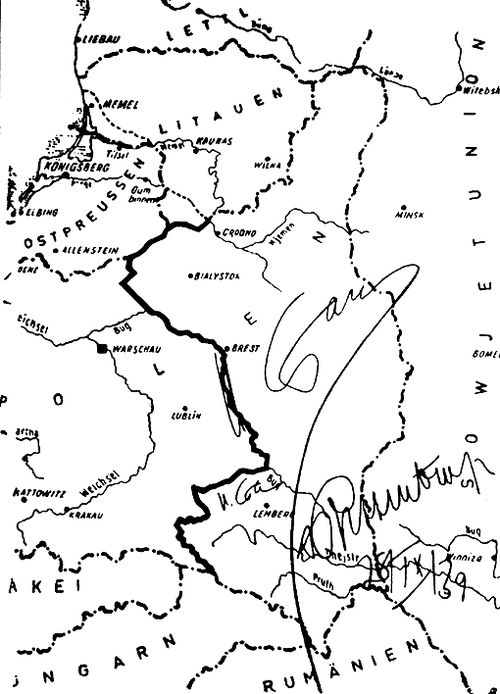