Cornerstones of the Independent

Author: WŁODZIMIERZ SULEJA 10.12.2019
We had already been building our statehood during the Great War, since at least the summer of 1915. In the last years of the First World War, the educational and judicial systems had finally become Polish as well. Officials had been trained for all departments of administration. Thanks to that, in November 1918, we were ready.

The effort of building a state

The road to Polish independence is usually portrayed in the military context, personified in the figure of Józef Piłsudski, as well as from the perspective of diplomatic actions undertaken by Roman Dmowski. Nonetheless, there is one element in this picture which is usually forgotten but is by no means less important. It was the effort put into the rebuilding of the Polish state, which had been awaking more and more determination since 1915 among those involved.

After the Germans took Warsaw, two civic committees – the Central and Warsaw Committees gained the ranks of actual national representation. The chairman of the latter, pr. Zdzisław Lubomirski also became the president of the capital. Formally, Warsaw once again became the capital city on September 21st 1915.

The first steps were taken on the least controversial ground – the municipal one. After the Germans took Warsaw, two civic committees – the Central and Warsaw Committees gained the ranks of actual national representation. The chairman of the latter, pr. Zdzisław Lubomirski also became the president of the capital. Formally, Warsaw once again became the capital city on September 21st 1915, but there were more important steps than this symbolic one – the attempts to lead the policy of done facts in such important matters as education and judiciary. The Polish courts worked only between August 5th to September 11th, since after that they were abolished by the Germans. Even still, the Polish education was in much better shape, with the Polish university and university of technology opened on November 15th in Warsaw. It was a clear sign, that the base for the Polish state, prepared so vigorously for years, was finally coming true.

Municipal government in the Kingdom

On the same level of importance, was the re-creation of the Polish municipality in the Russian controlled Kingdom of Poland – the Warsaw elections took place a year after the Russians retreated, on July 16th 1916. However; the most seen, massive, patriotic demonstration strongly expressing the will of the society at the time, was the march for the 125th anniversary of the founding of the May 3rd Constitution - on the streets of Warsaw there was a huge demonstration participated by over 200 thousand Poles; although, this anniversary was celebrated in both occupied territories, especially in Lublin.

The works on the cornerstones of Polish statehood intensified following the November 5th act. Even though, both the Temporary State Council and its successor, the Temporary Commission and finally the Regent Council remained strictly dependent on the central states, the number of Polish-spirited activities was on the rise. 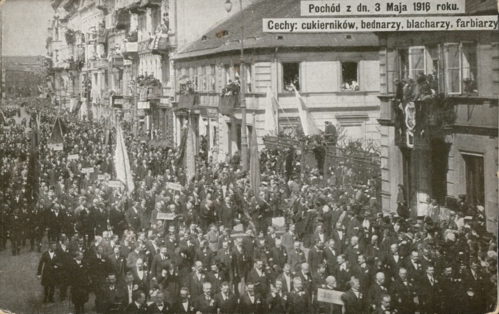 March from May 3rd 1916 in Warsaw; Photo: Biblioteka Narodowa

It was in the last year of the war, when the entire judiciary came indefinitely into the Polish hands (September 1917) and a month later - the entire education. It wasn’t, let’s add, a feverish improvisation but well organised actions, thought through to the last detail. Competent personnel was gathered representing all Polish districts and all, except for the left, political parties. What’s more, the Polish subjects of the Austrian emperor and more rarely the Prussian king who decided to work at the Polish judiciary often gave up their retirement pensions or other benefits from the oppressors, thus choosing their country over stability.

The most seen, massive, patriotic demonstration strongly expressing the will of the society at the time, was the march for the 125th anniversary of the founding of the May 3rd Constitution - on the streets of Warsaw there was a huge demonstration participated by over 200 thousand Poles.

It was then, especially since the autumn of 1917, when the future staff of officials for all the divisions of the administration was trained, starting with the highest ranks. Special courses and centralised records were initiated for all the potential candidates for the service for the Polish state. The health care system was built from ground up, studies on the state treasury conducted, surveyors and hygienists prepared for work, local municipalities supported in their activities and there were even plans for future call-ups to the military. Moreover, the Central Statistics Office was created so the Polish war losses could be estimated. It’s clear, that it was during that time when the efficient state officials, so crucial to the central and local institutions of the Republic of Poland rising from the ashes, were taught and prepared for their duties.

In the cataclysm of the First World War, Poles found an unexpected chance of reappearing on the European political scene. However, without the proper, consequent and well thought through preparations realised mainly at the Polish Congress territories occupied by the Germans and the Austrians, so in other words, without building the cornerstones of Polish statehood during the war, the process of reappearing on the maps in November 1918 would be much slower and much less effective.

The article was published in the IPN press supplement Road to Independence – “Rzeczpospolita – Plus Minus”, April 14-15 2019