Historical era
(1939-1945) II wojna światowa
Author: KRZYSZTOF SYCHOWICZ 14.09.2022
The Polish state, getting back on its feet after the hardships of the Polish-Bolshevik war in 1919-1920, strived to stabilise relations with its neighbours. The starting point for further contacts with the Soviet Union were the agreements of the Treaty of Riga, which ended the aforementioned conflict in 1921.

In connection to the changing political landscape of Europe, the Polish authorities made an additional pact on non-aggression with Moscow, in 1932, which was prolonged in 1934 to December 31, 1945. A separate agreement with the German Third Reich was of similar character, guaranteeing the immunity of Polish western borders until 1944.

Such moves were undoubtedly forced by the geopolitical situation of Poland, as well as by the need to normalise relations with its neighbours.

The policy led by the Second Republic of Poland since 1934 aimed at keeping the balance in relations with both Berlin and Moscow. All these attempts ended in a fiasco in 1939, when the Third Reich joined forces with the Soviet Union.

According to the international law, they guaranteed the inviolability of Polish borders and gave a chance for peaceful growth for the Second Republic of Poland, assuming that all sides intended to keep their promises. Reality, however, was quite different, especially in regards to the Soviet Union which treated the pact as temporary and only in force until it gathered enough strength to continue its expansion.

The policy led by the Second Republic of Poland since 1934 aimed at keeping the balance in relations with both Berlin and Moscow. All these attempts ended in a fiasco in 1939, when the Third Reich joined forces with the Soviet Union. The Third Reich began the negotiations on making the agreement in April, the same year. It is worth noting that the talks were led in secret from the international opinion, while at the same time the USSR openly negotiated with the representatives of France and Great Britain. The breaking of these by Stalin in August 1939 opened up the way for Joachim Ribbentrop to come to Moscow, where he signed the final agreement with the Third Reich. 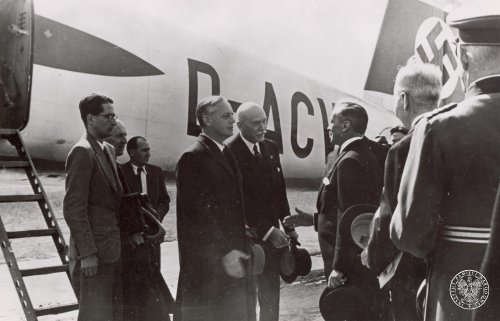 Airfield in Moscow, the Russians are greeting foreign minister of the Third Reich, Joachim von Ribbentrop (with the bright hat in hand), who came to sign the German-Soviet pact (the so-called Ribbentrop-Molotov Pact). August 23, 1939. Third Reich’s ambassador to the Soviet Union, Friedrich Werner von der Schullenburg (with the top hat in hand), is standing next to Ribbentrop. Passenger plane Lufthansa Focke-Wulf FW 200A-04 “Grenzmark" is in the back. Photo from the archives of the Institute

The German-Soviet pact, signed on August 23, 1939, known as the Ribbentrop-Molotov Pact, officially regarded the deal of non aggression between the two sides.

The German-Soviet pact, signed on August 23, 1939, known as the Ribbentrop-Molotov Pact, officially regarded the deal of non aggression between the two sides. Nevertheless, its most important element was the attached secret protocol, in which several independent states were divided between Germany and the Soviet Union - these were Lithuania, Latvia, Estonia, Finland and Romania.

Nevertheless, its most important element was the attached secret protocol, in which several independent states were divided between Germany and the Soviet Union - these were Lithuania, Latvia, Estonia, Finland and Romania. The territory of the Second Republic of Poland shared the same fate. It was divided along the rivers of Pisa, Narew, Vistula and San. As a result, 38% of the Polish lands were to be taken by the Third Reich and 62% by the Soviet Union. This paved the way for Hitler’s aggression on Poland, guaranteeing the help of a new ally. One could say that only these guarantees enabled the Third Reich to continue the expansion it began in 1938 in Europe. For both these states, the Second Republic of Poland was an “obstacle” on their way to build their own powers, and it also reminded them of their defeats suffered in the beginning of the 20th century.

The execution of the agreement made between Hitler and Stalin came on September 1, 1939, when Germany invaded Poland. At the same time, it was the beginning of the Second World War, which was to last until 1945. Despite the lack of promised help from the allied Great Britain and France, the Polish troops, certain of the imminent aid, fought with the better equipped enemy. Such events like the defence of the Polish Post Office in Gdańsk, the week-long battle of Westerplatte or the battles of Bzura and Mokra made their mark in history forever. To this day, Poles recall the heroic defence of Warsaw and the Hel Peninsula, as well as the crimes committed by the German troops on the innocent civilian population and prisoners of war. 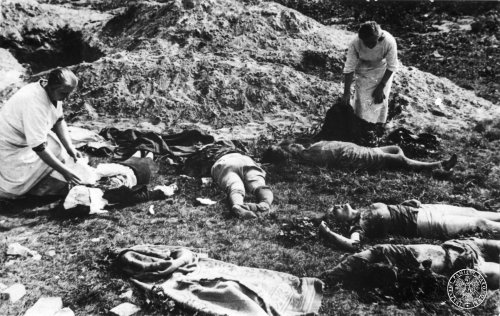 Warsaw, September 10, 1939. Two nurses from the St. Zofia hospital are covering the bodies of the victims of the German bomb attack on a residential building at the crossing of Żelazna and Nowolipie streets. Photo from the archives of the Institute of National Remembrance

The Soviets are here!

The next stage of these tragic events came on September 17, 1939, when the Red Army crossed the Polish borders from the east, taking revenge for the 1920 defeat. By doing so, the USSR broke all the agreements previously made with the Polish government, treating them as de facto non-existent. On the pretext of the dissolving of the Polish state, on that day at 3:00 am, the Polish ambassador in Moscow was summoned by the Russians and presented with the note informing him of the escape of the Polish government and the need to protect Ukrainians and Belarusians living in Poland. The Soviet statement was untrue, since the Polish government was still in the country at that time and only left in the evening of September 17 upon receiving the news on the Red Army invasion and the closing in armoured troops.

Polish soldiers taken prisoner were often murdered, mostly officers, policemen and landowners. It often took place on the initiative of the local population.

The fact that the Soviet troops entered the country without a declaration of war added to the confusion of the Polish authorities and the fighting soldiers just as the false information that the Soviets were there to help fight the Germans. However, already at that time, the Russians began committing their first war crimes. Polish soldiers taken prisoner were often murdered, mostly officers, policemen and landowners. It often took place on the initiative of the local population. In the Eastern Borderlands, during the September Campaign, the Soviets managed to capture around 230,000 Polish soldiers, including more than 8,000 officers. They mostly fought in the “Karpaty” or “Kraków” armies. Soldiers of the Border Protection Corps, who were the first to heroically defend Poland’s eastern borders, were also captured. 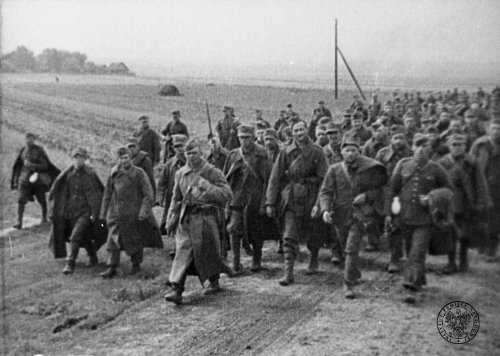 Poland, Eastern Borderlands, after September 17, 1939. The front of the column of Polish POWs is escorted by Soviet soldiers. The Soviet soldier in the front has a rifle with a bayonet on his arm. How many of these Polish soldiers will be murdered later during one of the countless Russian war crimes? Photo from the archives of the Institute of National Remembrance

Today, when the truth on these events is common knowledge, it seems only natural to accept historical facts. This, however, is often twisted and the historical discussion sees various cases of manipulation of the facts, including the undermining of the Ribbentrop-Molotov Pact, putting the blame on the authorities of the Second Republic of Poland, diminishing the importance of the breaking of international agreements by the Soviet Union. The Soviet war crimes, which are the consequence of the aggression of September 17, 1939, are also often omitted. It also seems, that some of the Russian historians are close to claiming that Poland itself led to the German aggression on its territory. Following that trail of thought, the only thing I can do is quote the words of the people’s commissar on foreign affairs of the Soviet Union, Vyacheslav Molotov, showing the true motives of the Soviet actions during that time. In a statement from October 31, 1939, he said:

“The not too strong advance of the German armed forces, and then of the Red Army, were enough to not leave a trace of Poland, this twisted bastard of the Versailles Treaty.”

Poles, however, showed them that they were still able to fight for their Homeland.