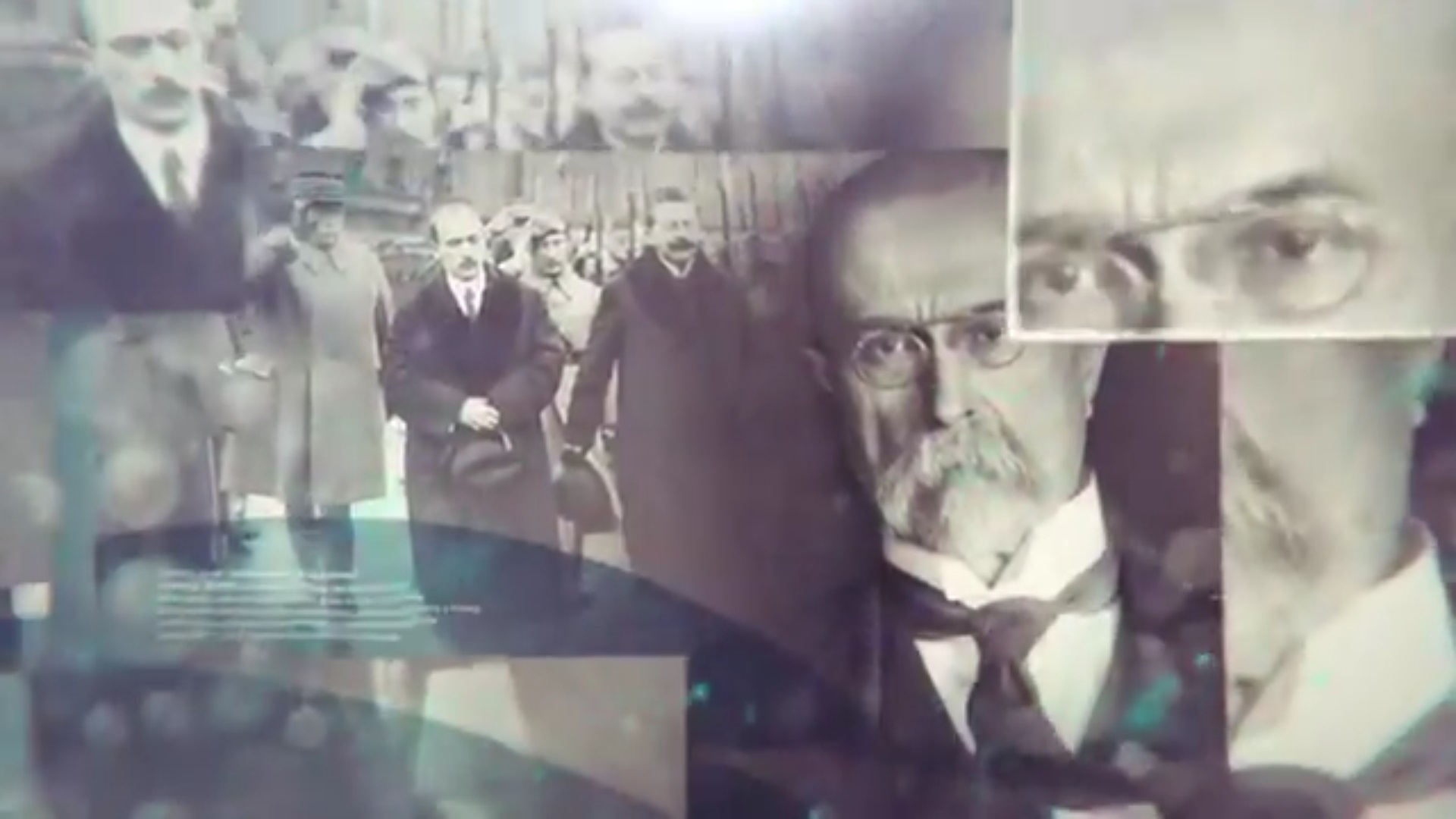 Author: SEBASTIAN PILARSKI 26.10.2021
Polish-Czechoslovakian relations, following the 1919 aggression of the First Polish Republic at the Cieszyn Silesia, were quite complicated. In 1920, Prague’s stance on the Polish-Bolshevik war became another unfavourable circumstance.

The Czechs cautiously welcomed the news of Polish successes during the Kiev Offensive of April 25, 1920. The press demanded to stop the transit of weapons to Poland, while Czechoslovakia was painted as the bastion of peace and democracy in Central Europe. Prague feared that Poland would create a strong state with Ukraine which would put an end to its hopes of directly bordering Russia and its economic benefits. It is not by accident that a day after Kiev was taken by the Polish army, the head of the Czechoslovakian Republic, Edvard Beneš, gave a positive response to the offer of establishing “normal relations” between Prague and Moscow.

The Czech blockade and pressure

In April 1920, the operation of blocking the transit of war equipment to Poland from Italy and France by the Czech railway workers, taking place since autumn 1919, increased in intensity. It was not Moscow’s initiative and during the conference in Cracow aimed at resolving the issue, the Czechoslovakian side blamed everything on the railway employees and their sabotage. The Polish government threatened to halt the deliveries of oil to Czechoslovakia, but Prague did not react to the Polish demands; between May and June no weapons transport arrived to Poland through the Morawy region.

Unsettling reports were also coming in from the Polish intelligence which informed about three Czechoslovakian divisions being assigned to operations against the Polish military. The rumours of a possible armed conflict between Poland and Czechoslovakia were treated seriously in Paris, and in case it broke out, Marshall Ferdinand Foch threatened to pull back all French military missions from both countries. Interestingly, Beneš - while protesting against the poor treatment of the Czech population in Poland - called the Republic of Poland a threat to peace of the entire continent.

The situation at the Cieszyn Silesia caused the world powers to debate on other (than the previously planned plebiscite) ideas for resolving the Polish-Czechoslovakian dispute. Already on May 4, the Conference of Ambassadors, on the motion of the Interalliance Plebiscite Commission, to suspend the vote for the following two months. On June 5, 1920, on France’s request, the Conference of Ambassadors decided to conduct an arbitrage under the leadership of the Belgian king, Albert. In the end, in the face of the lack of agreement of the Czechoslovakian parliament, the arbitrage did not take place. 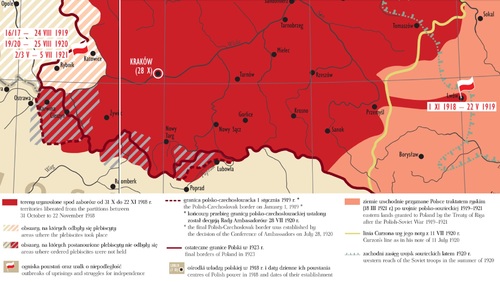 Fragment of the map Shaping Poland’s borders in the years 1918-1923 from the exhibition of the Institute of National Remembrance Fathers of Independence. Drawn by Kamila Łucjan

A misleading agreement in Spa

With such a course of events, the Ambassadors’ Conference returned to the concept of conducting a plebiscite, however, on July 10 Prime Minister Władysław Grabski, staying in Spa at the time, was convinced to sign “An Agreement with Chief Allied and Associated Powers”, which was synonymous with the acceptance of the final decision of the Highest Entente Council on the Cieszyn issue. Poland’s agreement was conditional on the Czechoslovakian guarantee of neutrality in the Polish-Bolshevik war and the opening of weapons transits to Poland through its territory. On the very same day, Grabski and Beneš signed the declaration agreeing to resolve the dispute.

Grabski thought it to be his success, although he was not aware that Beneš received promises from the world powers that the Spa agreement will be favourable to Prague. The Czechoslovakian side continued to block transits, while Beneš and President Tomáš Masaryk openly talked about greater stability in Central Europe after the fall of Poland in the Bolshevik war. Beneš even attempted to convince Polish diplomats in Vltava that being conquered by the Bolsheviks would not bring any change to the Republic of Poland and that Poles would have their freedom under their own Soviet Republic.

The official decision on the division of disputed territories between Poland and Czechoslovakia was made by the Council of Ambassadors on July 28, 1920, in Paris. The world powers “with the sound of Polish defeats [in the fight against the Bolsheviks]”, “with utmost haste and kindly following Beneš’s prompts” gave Poland “a devastating blow”. In reality, the allocation of the disputed area was decided already on July 11 in Spa, which was unofficially known by Beneš. 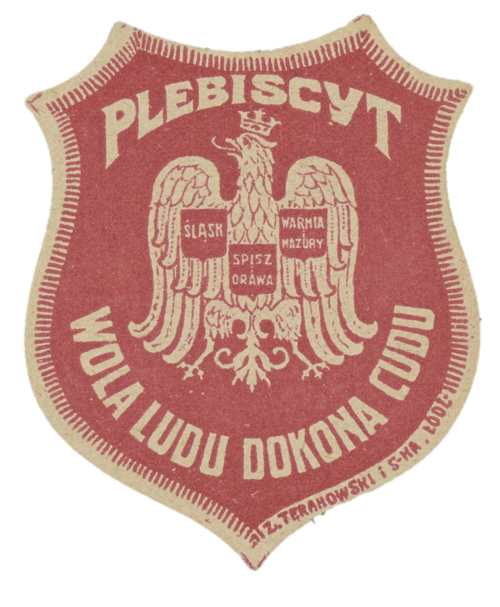 Fundraising badge. On the top: Plebiscite. On the bottom: The Will of the people will bring a miracle. Names of the regions on the crests in the middle: Silesia, Spisz and Orawa, Warmia and Mazury

Czechoslovakia received parts of Cieszyn (on the western bank of the Olza river), Frysztat, Trzyniec, Jabłonków, as well as some of the region east from Trzyniec and Jabłonków (to the western border of the Bielski region), and the southern part of the railway between Cieszyn and Jabłonków Valley. Northern-east Orawa and northern-west Spisz were given to the Polish Republic. In total, Poland received 1002 out of 2220 km2 and 142 thousand out of 435 thousand population of the Cieszyn Silesia. Czechoslovakia received the industrial area and 100 thousand Polish population. At Spisz and Orawa, 27 villages with 30 thousand people were given to Poland by the world powers, while Prague got 44 villages with 40 thousand people. While dividing the territories, the Entente took the line of influence of the French capital and the border of the estates of Larisch counts into account more so than the population.

The decision from July 28, made in the moment of the biggest threat for the barely regained independence of Poland, was definitely negatively reviewed by Polish diplomats and the public opinion. Ignacy Paderewski, Poland’s main delegate, indeed signed the document, but he protested it harshly. He was right to say that the decision of the world powers “dug a chasm between the two nations which could never be closed by anything”. Moreover, he argued that he approved the decision only in the fear of breaking Poland’s relations with the allied states.

The feeling of injustice prevailed among Poles and the decision from July 28 was compared to “a vivisection done by the allied states on a live body of the nation”. The exasperation, however, could not reverse what was already done; the delimitation of the border was conducted immediately.

The unkind “neutrality” of Czechoslovakia

During the biggest threat for the Republic of Poland, the Bolshevik aggression, on August 9 the Czechoslovakian authorities announced neutrality towards the war. Nonetheless, this neutrality should be described as hostile, since, apart from the constant blocking of transports, the Czechs welcomed in 1920 in Prague the representative of the Western-Ukrainian People’s Republic, Evhen Petrushevich, planning to cause an uprising in East Lesser Poland.

The Polish side had no doubts regarding the Czechs’ attitude; there was no hope for support from them. It was speculated that such help could only come as a result of pressure from other world powers. However, the head of the French mission to Czechoslovakia, Gen. Maurice Pelle, not only opposed the idea of Hungarian support for Poland, but also showed understanding to the negative stance of Prague on the Bolshevik-attacked Poland. There was also speculation that Prague promised Moscow to gift it the Podkarpacka Ruthenia region as a gesture of good will, in case Poland lost the war.

Before the decisive Battle of Warsaw, the Czechoslovakian press described Poles’ position as highly unfavourable:

“It is worth noting that the Polish army is not divided, it has enough men and equipment. It often retreats in battle from the 36 Bolshevik divisions due to bad morale.”

The authorities of the First Czechoslovakian Republic were prepared for the possibility of Poland’s fall, which finds confirmation in the so-called plan “B” (Bolsheviks). The military would guard the borders with Poland and be ready for taking in refugees to later be sent across the Czechoslovakian territory. The Czech government tolerated manifestations of support for the Bolsheviks which took place especially on August 19, 1920. 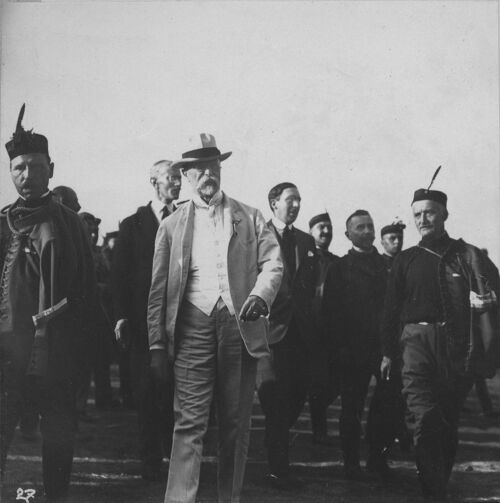 The findings of the Polish military attaché to Vienna on the Czechoslovakian attitude towards the conflict with Soviet Russia are also quite interesting:

“Directly before announcing their neutrality, the Czechs communicated with Moscow and even led negotiations with them. […] It was both clear and suspicious that during the Bolshevik offensive, when all other neighbouring states anxiously followed the course of events, only the Czechoslovakian republic felt at ease and did not undertake any military precautions.”

The announcement of the Chief Command of the Polish Army from August 15, pointing to the slowly shaping change of Prague’s stance, had a slightly less clear message:

“The initially indescribable joy over Polish defeats turns into worry over what consequences will the further advance of Russian troops bear for the Czech state.”

The comparison of aforementioned opinions shows how crucial was Prague’s stance on the Polish-Bolshevik war for the development of bilateral relations between the Polish and Czechoslovakian Republics. Practically no one attempts to explain the negative stance of Beneš-led diplomacy towards Poland in the summer of 1920. Public opinion in Poland not only accused the Czechs of being unfriendly, but also pointed out their taking advantage of Poland’s tough situation to resolve the Cieszyn issue. It all caused the aversion to Czechoslovakia to be more and more prevalent and cast a shadow over the relations between the two nations for later years. Czechoslovakia was no longer viewed as a potential ally, but more and more as a rival in the fight for primacy in Eastern Europe. 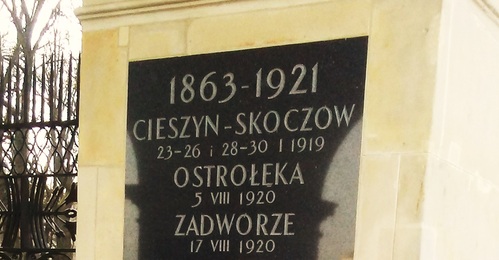 The Polish-Czechoslovakian war on January 23-30 1919 and the Battle of Skoczów were commemorated on one of the plaques of the Tomb of the Unknown Soldier in Warsaw. Photo: Sławek Kasper (IPN)

According to some historians, as a result of Prague’s attitude, the Polish-Hungarian-Romanian block under French leadership, of both anti-German and anti-Soviet character, did not come to be in the summer of 1920. In the end, Paris backed down from these intentions due to the fear of pushing Czechoslovakia closer to Germany.

In 1920, nothing pointed to the betterment of relations between Poland and Czechoslovakia. The memory of the events from July and August was too strong, despite the declarations of peaceful relations with all neighbours. Józef Piłsudski stated that peace was crucial for the rebuilding of the country, so he wanted to “maintain, if possible, friendly relations with all […] our neighbours”, while stressing that “it also depends on them.” He also added that:

“Czechoslovakia, built with various elements in a constant state of unease, is also [like Germany] the cause of much concern for us in the future.”