Did the Polish state seize to exist after the German invasion

Author: Paweł Kosiński 13.04.2021
Only the German Reich, the USSR and the Slovakian Republic agreed in 1939 that as a result of their aggression the Republic of Poland was conquered, meaning its sovereignty was taken away following an armed invasion and the total seizing of control over the country.

The aggressors took this stance, although according to the laws and traditions of war, regulated by the international community already in 1899 and 1907 (the second and fourth Hague convention), the occupier was only to be a temporary administrator of the taken lands, obliged to follow the laws of the invaded country, except for some definitive obstacles. Apart from that, the act of aggression itself was a violation of the order to peacefully resolve international disputes proclaimed by the Pact of the League of Nations (Germany left the League on 21 X 1933, the USSR was excluded on 14 XII 1939, while Czechoslovakia was its member until 15 III 1939), and especially a violation of the international anti-war treaty known as the Briand-Kellog Pact (signed by Czechoslovakia and Germany on 27 VIII 1928 and by the USSR right after that), whose parties condemned war as a concept and renounced it.

Legal doubts on the German side

At the same time, it is worth noting that despite the fact the Republic of Poland was beaten, its territory taken and some of its parts annexed (Hitler’s Decree of 8 X 1939) and the fact that the General Governance was created at the taken Polish territories (Hitler’s Decree of 12 X 1939), the question of the status of the Polish state was still very alive in the Reich. It was so not only due to the matter of the eventual creation of the puppet Polish state, which was to be the bargaining chip during the possible peace talks with Great Britain and France. Poland’s legal situation was worrying for i.e. the high command of the German Wehrmacht, which in April 1940 officially asked the German foreign ministry (Auswärtiges Amt – AA) whether the Polish state was still in existence and if it was still in the state of war with the Third Reich. It was all about the range of the Hague convention, especially regarding status of Polish prisoners of war. In response, the Office on International Law AA informed that the Polish state was no longer in existence and that it former territories went under the jurisdiction of other countries (at the time the Third Reich, USSR, Slovakia and Lithuania). However, this stance did not end the internal German discussion which continued at the forum of the Academy of German Law (Akademie für Deutsches Recht – ADR), until 1942 incidentally led by Hans Frank. During the next years of the war discussions on the subject: “legal-statehood formation of the General Governance” and the “status of the citizens of occupied Poland” were led by members of the Committee on International Law ADR (Ausschuss für Völkerrecht) at joint sessions with members of the German Association for International Law and Global Policy (Deutsche Gesellschaft für Völkerrecht und Weltpolitik) and the Committee on International Law ADR (Ausschuss für Nationalitätenrecht).

Fragment of a propaganda film about the USSR's aggression against Poland in September 1939, probably made in 1939/1940 by a film studio in Kiev.

Meanwhile, the thesis on Poland’s fall was firmly expressed in a diplomatic note handed on 17 IX 1939 to the Polish ambassador to the USSR Wacław Grzybowski by the deputy People’s Commissar of Foreign Affais Vladimir Potomkin, which included the statement:

“As a result of losing all its industrial territories and cultural centres, Warsaw’s loss of capital function and the lack of activities of the Polish government,”

the Polish state seized to exist.

Fragments of the German-Soviet alliance and borders treaty from 28 IX 1939 were written in similar tone, with parts on setting a shared border across the territory of the “former Polish state” and on the fact that the fall of the Polish state made it necessary for the Third Reich and Soviet Union to bring back “peace and order” and gave them legal ownership over the previous Polish territory. In the following months, both countries defended this stance in unison in all enunciations, both those addressed to international communities (like the AA’s instruction to its diplomatic representatives from 3 X 1939) and those addressed to their own communities (i.e. the speech of the People’s Commissar of Foreign Affairs Vlacheslav Molotov at the session of the Highest Council of the USSR on 31 X 1939). 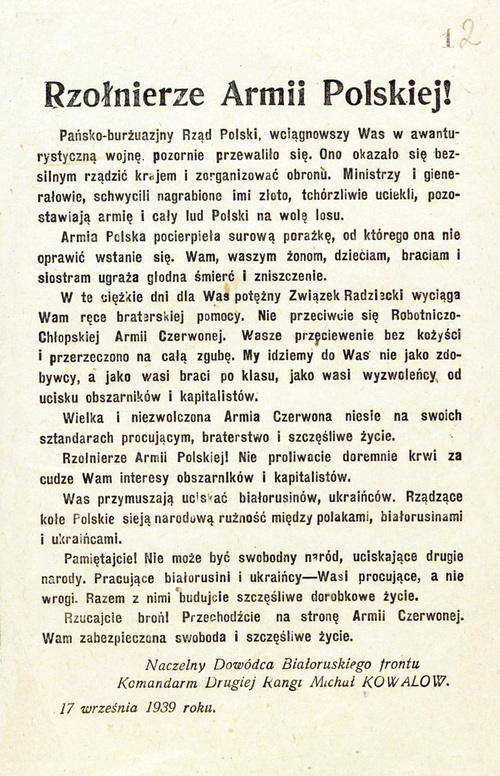 “Soldiers of the Polish Army! Your generals left you and death and destruction threaten you and your families. The mighty Soviet Union is reaching out to you…” Soviet leaflet to Polish soldiers, September 17th 1939.

The Polish legal doctrine, generally unquestioned by the foreign researchers, is essentially unanimously supporting the stance that despite the occupation by hostile powers of the entire Republic of Poland since the beginning of October 1939, the Polish state did not seize to exist. The following four elements are emphasized in this regard:

1) the lack of capitulation act of the Polish Army

4) the continued recognition of the Polish statehood not only by countries at war with Germany, but also by neutral states

The main reason behind Poland’s unwavering international status was the last point - the element which was the consequence of the setting of precedence of traditional international law resulting from the dissemination of the need to ban the use of violence in relations between countries.

The thesis on the fall of Poland, rejected by almost the entire international community, was kept up by the Soviet Union until the signing of the Sikorski-Mayski agreement on 30 VII 1941 where the “bringing back of diplomatic relations” is mentioned, not its creation anew. The government of the Third Reich did not change its stance on the matter until its unconditional surrender on 8 V 1945. In the context of the law and international relations, the policies of the USSR, continued until the end of the war and even later, including the policy of controlling Poland and enforcing both territorial and systemic solutions on it, changed absolutely nothing.