Author: MIROSŁAW SZUMIŁO 23.12.2020
To this day, historians have been arguing about the causes of the Volhynian massacre committed by Ukrainian nationalists in 1943. No written orders have been preserved, however all the evidence and circumstantial evidence indicate that the direct responsibility for unleashing a wave of murders on Polish civilians lies with the then UPA commander in Volhynia – Dmytro Klyachkivsky aka "Klym Savur".

Dmytro Klyachkivsky was born on November 4, 1911 in the city of Zbarazh, in Eastern Galicia. Contradictory information about his social origin is given in the Ukrainian sources. According to one version, he was the son of a poor peasant, according to another one - of a bank clerk. In any case, he could afford to study at the Ukrainian gymnasium in Stanislaviv, and then undertake legal studies at the Jan Kazimierz University in Lviv, which he did not complete. In the first half of the 1930s, he performed compulsory service in the Polish Army, and later he worked in the Ukrainian food cooperative "Ukrainian Torhivla".

The main founders of the Bandera's UPA in Volhynia were Dmytro Klyachkivsky "Klym Savur" and the military officer of the OUN - Vasyl Ivachiv alias "Sonar". After Ivachiv's death in a clash with the Germans on May 13, 1943, Klyachkivsky took over the entire UPA partisan forces.

While still a student, he joined the illegal Organization of Ukrainian Nationalists (OUN), quite popular among the young Ukrainian intelligentsia at that time. He was probably induced to do it by the lack of prospects for the future due to the economic crisis of the 1930s and the discriminatory policy of the Polish administration towards Ukrainians. At that time, these factors made some young Ukrainians vulnerable to radical slogans and extremist ideology. In the fall of 1937, Klyachkivsky was arrested by the Polish police and spent a short time in prison, however, he did not perform any important functions in the OUN.

Since September 1939, under the Soviet occupation, he continued his activity as the head of the OUN youth organization in Stanislaviv. In September 1940, he was arrested by the NKVD and sentenced to death. However, the sentence was changed to 10 years in prison. After the German attack on the Soviet Union, at the beginning of July 1941, Klyachkivsky got out of prison in Berdychiv and actively joined Stepan Bandera in the activities of the OUN faction - the so-called OUN-B. Since the beginning of 1942, he was the providnyk (chairman) of the OUN-B on the so-called northwestern territories (Volhynia and Polesye). 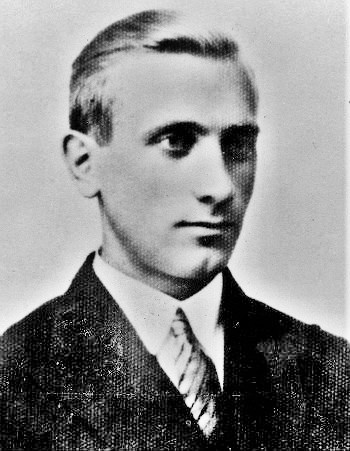 At the beginning of 1943, the Bandera followers started to create their own partisan units in Volhynia, where the terrain conditions were the most favourable (large forestation). Initially, it was agreed that these units would be called the Ukrainian Liberation Army. It should be remembered that the first underground organization under the name of  the Ukrainian Insurgent Army was established in the fall of 1941 by Taras Borovec alias "Taras Bulba". It had nothing to do with the Banderites, on the contrary - it referred to the Petlurian traditions of the Ukrainian People's Republic. In the spring of 1943, the Banderites deliberately stole the name "UPA" from the Bulba followers for their armed units, as they were well aware that it was well recognized in Volhynia and Polesye. Initially, the Bandera-led UPA repeatedly pretended to be partisan units of the Bulba followers in order to gain the local Ukrainian population's trust. Probably it was why the Bulba followers were falsely accused of participation in the extermination of the Polish population in Volhynia. The Poles, like Soviet partisans, very often did not distinguish the Bandera's UPA units from the UPA units led by "Bulba"-Borovec.

He gave orders orally in June 1943 to commanders of individual regions. We know about this from the testimony of Yuriy Stelmashchuk alias "Red-haired", who received an order from Klyachkivsky to murder all Poles in the Kovel district.

The main founders of the Bandera's UPA in Volhynia were Dmytro Klyachkivsky "Klym Savur" and the military officer of the OUN - Vasyl Ivachiv alias "Sonar". After Ivachiv's death in a clash with the Germans on May 13, 1943, Klyachkivsky took over the entire UPA partisan forces. The first was the sotnya of Hryhoriy Perehiyniak "Dovbeshka-Korobka", which on February 9, 1943 murdered at least 155 Poles in the Parośla colony (Sarny district). This massacre is considered to be the symbolic beginning of the so-called anti-Polish action of the OUN-UPA. "Klym Savur" wanted to subdue the units led by "Bulba"-Borowiec. However, no agreement was reached, and one of the main points of contention was precisely the attitude towards the Poles. "Bulba" did not agree to the implementation of the plan to "cleanse the entire insurgent territory of the Polish population".

Victims of the UPA attack on a train conducted on June 16, 1944 near Zatyl (vicinity of Lubycza Królewska). Photo: IPN collection

Ukrainian historians try to present the slaughter of Poles in Volhynia in 1943 as a spontaneous popular rebellion, or possibly attribute responsibility for the first murders to the Bulba followers or Soviet provocations. Their main defence argument is the fact that no written orders from the OUN leadership or the UPA command regarding this massacre have been retained. However, indirect evidence and the course of events itself testify to a planned, systematic action led by Klyachkivsky.

The beginning of the Volhynian genocide should be associated with the mass desertion of several thousand Ukrainian policemen on German service, who escaped to the forest in March 1943 and joined the Bandera's UPA.  Already then, all Poles were systematically liquidated in the Sarny and Kostopol districts. In April 1943, during the Holy Week of Easter, there was a concentric attack on Polish population centres in the entire eastern part of the pre-war Volhynia Province. Attacks with a slightly lower intensity continued in May and June. The identity of the perpetrators is evidenced by, for example, the letter from Taras "Bulba"-Borovec to the leaders of the OUN-B of March 25, 1943, in which he wrote,

Instead of following the agreed tactics, the [OUN-B] Organization has recently opened another front for Ukrainians - the Polish one. Axes and firebrands were used. Whole Polish families are slaughtered and hanged, and Polish buildings are burned down. The "axe-men" slaughter and hang helpless women and children in a shameful manner... .

An announcement of the final attack on the Polish population of Volhynia were the appeals issued by "Klym Savur". On May 18, 1943, he addressed an appeal to the Polish population, in which he attributed to the Poles cooperation with the Germans and responsibility for the aggravation of the Polish-Ukrainian conflict. In June 1943, he issued an appeal to the Ukrainian population, which was clearly a propaganda preparation for the July operation of mass liquidation of Poles. Falsely accusing Poles of complicity in German crimes and cooperation with the Soviets, he stated,

So, if a new Haydamakh or Kolivshchyna breaks out in the Ukrainian lands, the responsibility for it will fall only and exclusively on those circles that led the Polish liberation policy to the anti-Ukrainian camp of Moscow and German imperialism […]. But let the minions of Moscow and Berlin not forget that the Ukrainian people can take revenge!

This was how he justified the activities of a genocidal nature. He gave orders orally in June 1943 to commanders of individual regions. We know about this from the testimony of Yuriy Stelmashchuk alias "Red-haired", who received an order from Klyachkivsky to murder all Poles in the Kovel district. The culminating moment of the so-called anti-Polish action was held on Sunday, July 11, 1943, when UPA units, supported by mobilized Ukrainian peasants, attacked 99 localities at the same time. By the end of July, at least 10,000-11,000 Poles were murdered, and the total number of victims of the genocide in Volhynia reaches about 60,000 persons. 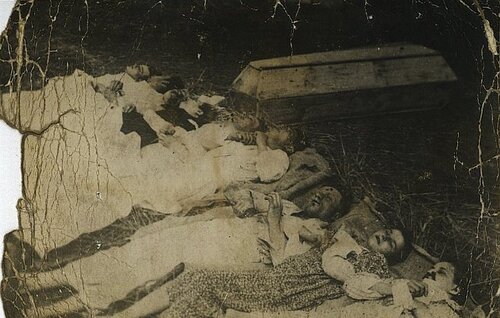 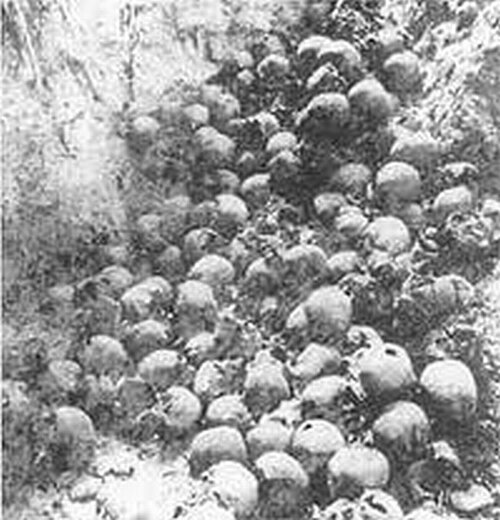 Remains of the victims from Ostrówki and Wola Ostrowiecka retrieved during the exhumation of the mass graves in August 1992. Photo: Leon Popek’s collection

It remains unclear whether the order to murder entire Polish villages was contained in a secret directive of the leadership (the so-called Central Provid) of the OUN-B or whether "Klym Savur" carried out an anti-Polish action with genocidal methods on his own initiative. The latter version is supported by the fact that in August 1943, during the OUN-B congress, some members of the Central Provid recognized the action of physical liquidation of entire Polish communities as an arbitrary action and a political error. However, most of the members of the OUN leadership, including the providnyk (chairman) and UPA main commander Roman Shukhevych, stood on the side of Klyachkivsky. It was also decided to apply the methods used by "Klym Savur" to Eastern Galicia, which soon became a fact. There are many indications that Klyachkivsky had already received approval and consent from Shukhevych.

As the Ukrainian historian Ihor Ilyushin stated, there is no doubt that

Responsibility for making the decision to murder tens of thousands of civilian Poles, including old people, women and children, in accordance with the principle of collective responsibility, rests in the first place with the Bandera leadership.

At the end of 1943, Dmytro Klyachkivsky was appointed commander of the UPA-North group. During the second Soviet occupation, he hid in the area of Klevan. He died in a clash with an NKVD unit on February 12, 1945. The place of his burial remains unknown. 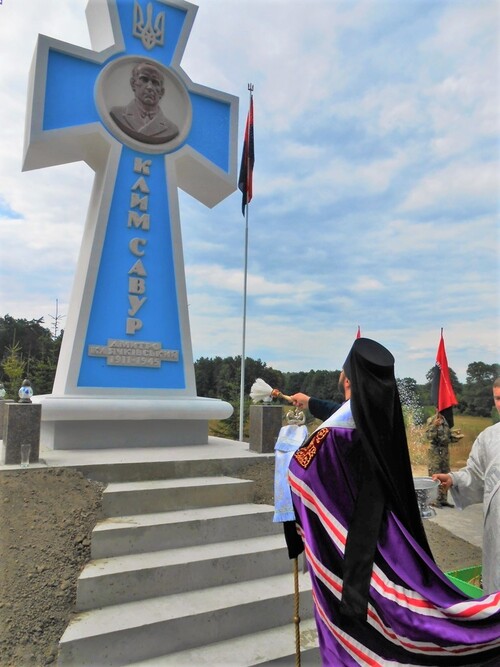 Monument to Dmytro Klyachkivsky as Klym Savur at his place of death near Orzhiv, sprinkled with holy water by a Ukrainian Orthodox priest (2015). Photo: Wikimedia Commons/GolbeUA - Own work (CC BY-SA 4.0)

The memory of "Klym Savur", but also of other Ukrainian nationalists, Stepan Bandera and Roman Shukhevych, divides Poles and Ukrainians. In western Ukraine, Klyachkivsky is depicted as a "flawless knight" who, in the fight for the freedom of his homeland, sacrificed his most precious thing - his life. He is commemorated by monuments in Zbarazh and Rivne and names of streets in several cities. At the same time it is ignored that he is responsible for mass actions against the Polish civilian population. The Internet Encyclopedia of Contemporary Ukraine calls Klym Savur "a supporter of 'extensive armed struggle against the Nazis and representatives of the Soviet power.'" Not a word was mentioned about his participation in the crimes committed against Poles.