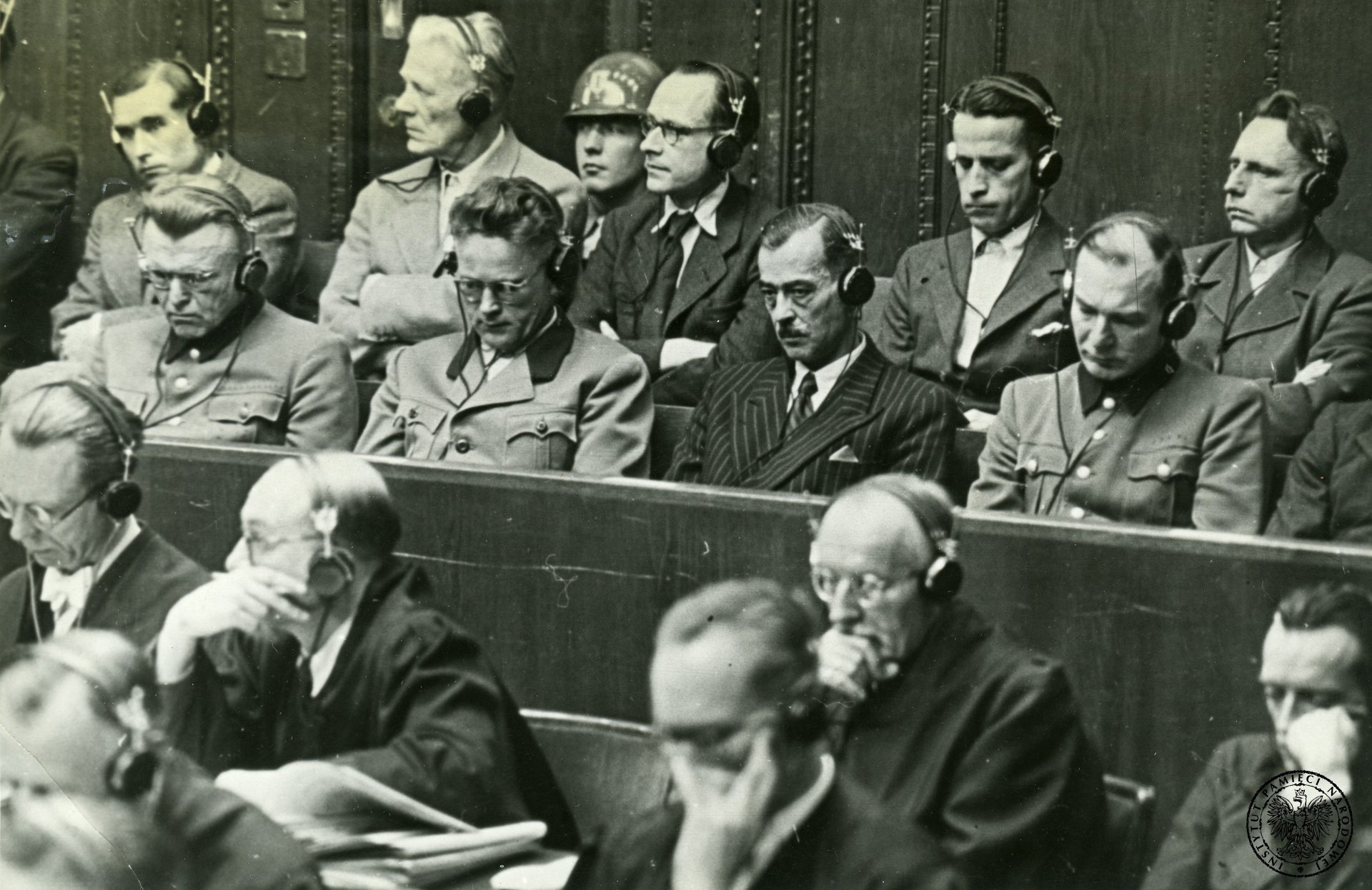 Author: Sylwia Afrodyta Karowicz-Bienias 08.10.2020
Ethnic cleansing committed by the Nazis during World War II focused mainly on the Jewish community was not the only course of eugenic thought. People who had been harmed by birth - the disabled and mentally ill, were not spared the torturers wearing German uniforms.

T4 or the eradication of worthless life

The development of eugenic thought and desire in preserving the German race led to the mass murder of millions of innocent civilians. Victims, who did not die on a battlefield bearing arms, but ordinary people who were brutally murdered in the name of Nazi ideology. Unfortunately, people with disabilities and mental illnesses accounted for a notable percentage of these pointless deaths.

Central to this issue is Aktion T4, the T4 representing Tiergartenstasse 4, the address of the Chancellery department set up early in 1940 to accommodate the Aktion T4 programme. The purpose of the programme was the complete elimination of “life unworthy of life” (Ger. Vernichtung von lebensunwertem Leben), in other words, individuals with different kinds of defects and disabilities, developmental disorders and, above all, mental disorders. People classified to this group were recognized as useless in society and as economic burden on the state which, in the face of intensive military operations underway, was unwarranted from the viewpoint of the Nazi government.

The beginnings of the intellectual trend called eugenics took root in Germany as early as in the 1920s. At that time two medical doctors, Alfred Hoche and Karl Binding, brutally interpreted Darwin’s evolutionary theory in a booklet entitled “Permission for the destruction of a life deprived of value” (Ger. Die Freigabe der Vernichtung lebensunwerten Lebens). According to their beliefs, humanitarianism manifested by saving every human life contradicts with natural law, where weak individuals die as a result of so-called natural selection. Therefore, it is justified to eliminate all disabled people by way of involuntary euthanasia, because the natural environment would in any event not provide them with the chance of survival. 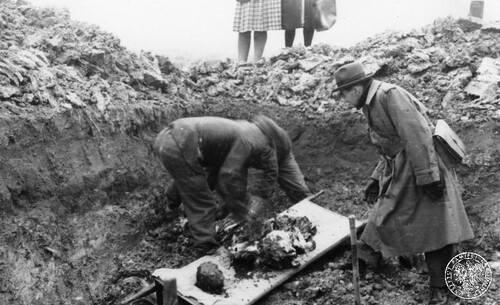 Effects of the eugenic madness of the Germans: human remains pulled out of the death hole and put on stretches during the exhumation of the patients of the hospital for the mentally ill in Kraków-Kobierzyn in 1946, brutally murdered by the Germans during the occupation. Photo from the collection of the Institute of National Remembrance 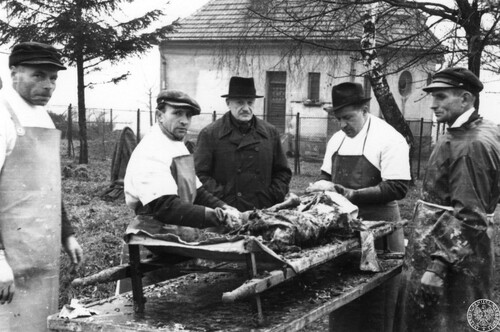 Exhumation of the patients of the hospital for the mentally ill in Kraków-Kobierzyn murdered by the Germans as part of the genocidal eugenic during the Second World War. November 1946. Inspection of the remains lying on the table. Photo from the collection of the Institute of National Remembrance 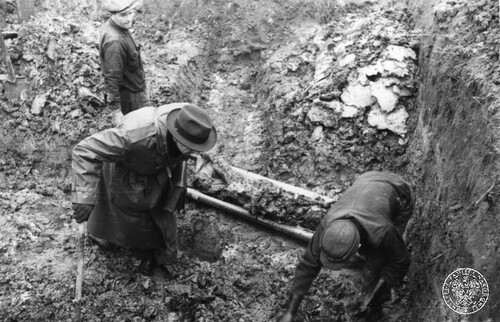 Remains of patients of the hospital for mentally ill in Kraków-Kobierzyn, victims of the German murders conducted during the occupation. Exhumations in November 1946. Putting human remains on stretches, remains taken out of holes which the Germans thought would forever hide the truth about their eugenic crimes. Photo from the collection of the Institute of National Remembrance

The Nazis began to realise the vision of societal “purgation” as soon as they took power in Germany. In 1933, on 14th of July, the Act on Preventing an Inheritably Burdened Progeny (Ger. Gesetz zur Verhutung erbkranken Nachwuchsrt) entered into force, under the power of which, individuals with inheritable diseased such as: mental retardation, schizophrenia, psychosis, epilepsy, and alcoholism, were involuntarily sterilised. The estimated number of people who fell victim to this procedure was in the region of 350,000. A few years later, on 18 August 1939, the Reich Committee for the Scientific Registering of Hereditary and Congenital Illnesses was established, its purpose being the registration and classification of newborns with unwanted health issues.

Further, and far more drastic actions, were implemented by Hitler after the outbreak of World War II. In October 1939, the leader of the Reich signed an act (backdated to 1 September of that year), sanctioning the ultimate elimination of all disabled people from society.

Initially, mass extermination in the territory of Germany concerned only children, mainly those staying in medical facilities. It is estimated that up to 1941, more than 5,000 German children were brutally murdered. Doctors inspired by ideas propagated by eugenic thought did terrible things to implement their ideas. There were frequent cases in which the parents of hospitalised children received notification of the transfer of their child to a special center where they were to undergo diagnostic tests. After a few weeks, however, the parents would be informed that their child had died and typically pneumonia was given as the reason for death. In reality the children were injected with a lethal dose of toxic fluid, usually phenol. 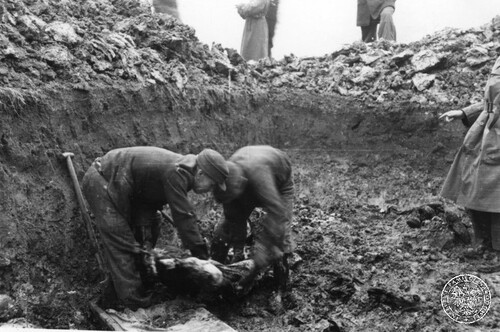 Digging up remains of patients of the hospital for mentally ill in Kraków-Kobierzyn, victims of the German murders conducted during the occupation. Exhumations led in November 1946. Photo from the collection of the Institute of National Remembrance 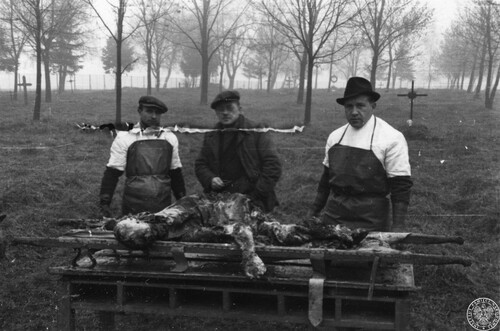 Exhumations of remains of patients of the hospital for mentally ill in Kraków-Kobierzyn, victims of the German genocide. November 1946. Exhumation works on remains lying on the table. Photo from the collection of the Institute of National Remembrance 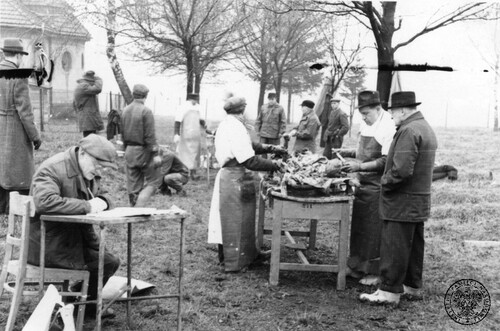 Remains of patients of the hospital for mentally ill in Kraków-Kobierzyn, exhumed, researched and described in November 1946. According to the Germans they led worthless lives. And they were murdered by the Germans in the name of the German. “scientific” eugenic. Photo from the collection of the Institute of National Remembrance

Exterminations were not just conducted on German territory but also in countries under occupation or otherwise annexed by Germany, including Poland. At the beginning of 1940, six official centers for the extermination of disabled adults were founded labelled “A”, “B”, “Be”, “C”, “D” and “E”. However, beyond these centers there were many unofficial sites that focused on the eradication of juveniles. These clinics, as they were referred to, played a key role in the further development and evolution of extermination procedures during the Holocaust. Patients of “special treatment centers” and psychiatric hospitals, were tested with different methods of killing - the most efficient and the least expensive. Initially patients were killed by lethal injection but later they were simply shot. As a progression and in the interests of efficiency, it was thought more efficient to kill people in number rather than one at a time, experiments began using lethal gases such as: carbon monoxide, hydrogen oxide and hydrogen cyanide. Importantly, it was in Poland that the first mass murders of disabled adults occurred, and this practice spread from Polish territories to others that had fallen to Germany. The first experiments involving gas as a lethal agent were carried out in Poznań, where hundreds of prisoners were killed in an improvised gas chamber. The solutions used on a huge scale in Nazi concentration and extermination camps were mainly tested on people qualified for inclusion in the Aktion T4programme. Frequently, the brains of the deceased were removed and used as samples for medical examination.

Following a series of protests from German and Austrian society and church authorities, the programme was officially suspended on 24th August, 1941, however, it continued to be carried out in secret. On 30th October, 1942, a new unofficial directive was released and issued to psychiatric hospitals, which ordered the introduction of a “special diet” for “hopelessly ill patients”, a diet based on malnutrition and starvation slowly leading to their  demise.

Due to the semiofficial character of the extermination programme for deficient persons, it is difficult to assess the number of victims involved with any degree of certainty. However, according to researchers, in Germany and Austria alone, the number exceeded 200,000 people, while in the occupied European territories a further 100,000 individuals were believed to have been murdered. The last victim of the Aktion T4 programme, was a four-year-old boy, killed by lethal injection on 29 May 1945, in a hospital near Monachium, three weeks after the Third Reich’s capitulation.

Those German officials who had directly participated in the Aktion T4 programme were given a separate lawsuit, the first of the so-called follow-up processes after the trial of the most prominent Nazi criminals. In the literature, the first of these follow-up trials is commonly referred to as The Doctors' Trial or Euthanasia Trials. It was held before the American Military Tribunal No. 1 and bore the official title “United States of America v. Karl Brandt, et al.”. Of the 23 accused of participation, or at least direct connection with the implementation of the Aktion T4’s activities, 20 were doctors. They were charged with involvement in Nazi experiments on people and mass murder under the guise of euthanasia. On 20 August 1947, after a trial lasting 140 days, the hearing of 85 witnesses and the submission of some 1,500 documents, the American judges found 16 of the defendants guilty, seven of whom were sentenced to death with the remainder received prison sentences ranging from ten years to life. Those who had received death sentences were executed on 2 June 1948. 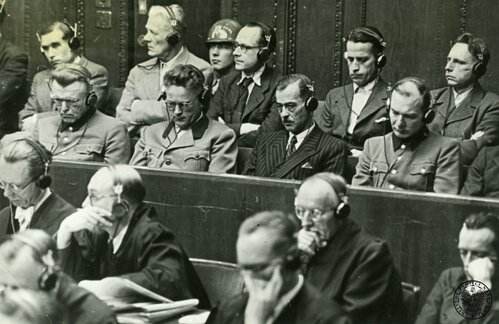 The so-called trial of the doctors in front of the American court martial in Nuremberg (US vs. Karl Brandt and others), 1946 – 1947. 9 out of 23 accused criminals sit at the court room. They are probably (from the left): in the first row Karl August Genzken (?), unknown, unknown, Joachim Mrugowsky; in the second row Hermann Becker-Freyseng, Georg Weltz, Konrad Schäfer, Waldemar Hoven (?), Wilhelm Beiglböck. In the foreground sit the defenders of the accused in robes.

Unfortunately, not everyone guilty of murdering almost 30,000 sick and disabled Poles were brought before the Nuremberg tribunal, which is why the prosecution of these crimes was taken up by Polish law enforcement agencies. On the basis of a decree of the Council of Ministers of 10 November 1945, the Main Commission for the Investigation of German Crimes in Poland was established and its branch commissions, spanned the country.

One of the first proceedings initiated in relation to the activities of Aktion T4 in Poland, was conducted in 1946-1947 by the Branch Commission in Krakow regarding the liquidation of patients in the hospital for the mentally ill in Kobierzyn. As a result of this atrocity around 1,000 helpless people lost their lives. Despite the fact that investigations lasted for over 30 years, they failed to bring those guilty of this particular crime to justice. However, it has not been forgotten and the Polish state has not ceased activities in this regard.

Excerpts from the article S. Karowicz, Nazi Crimes on People with Disabilities in the Light of International Law – a Brief Review,
Bialostockie Studia Prawnicze 2018, vol. 23 no. 4, pp. 187-195