Author: WALDEMAR REZMER 17.08.2020
The Republic of Poland, reviving in the wake of the wars of 1918 – 1921 was not a party to the Hague Convention of 1907 regulating the issues of POWs, however it respected its provisions.

This also referred to the Polish-Bolshevik war, which de facto began on 4 January of 1919 near Vilnius, and ended de iure by a peace treaty entered into in Riga on 18 March 1921. Ending the war, both parties to the repatriation arrangement dated 24 February 1921 acknowledged that the POW status also applies to all those who served in Polish armed formations battling against the Bolsheviks on Russian territory in the years 1917 – 1920. 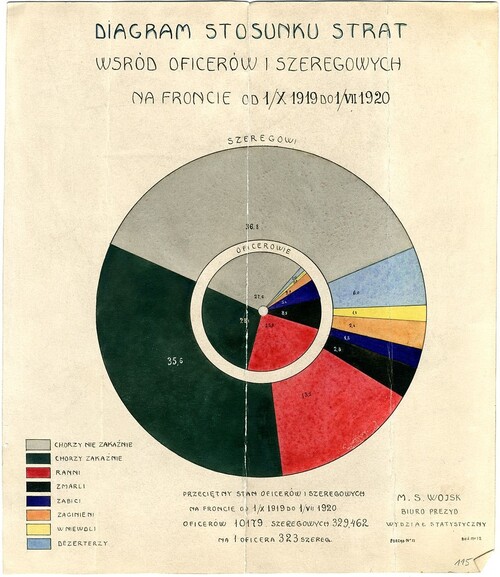 The decisive majority were captured, a small amount actually disappeared without a trace, and there were deserters, who changed sides.

Ca. 44,000 Polish Army soldiers listed as missing ended up in permanent Soviet captivity. Many more were actually held in captivity but of these many fled or were returned after changes on the front, and they were not counted in this category.

The most populated group of Polish Army soldiers which simultaneously – on 11 January 1920 – entered into Soviet captivity, belonged to the 5th Rifle Division. It was formed in 1919 in Siberia of the Poles residing there and Russian soldiers of Polish nationality freed from captivity and mobilised to German and Austro-Hungarian armed forces during World War I. Many Poles included into the Russian Army also belonged to this division and demobilised after the revolution of 1917. From autumn 1919 the division fulfilled the role of a backup guard during ongoing battles of the armies of Admiral Kolchak and the Czechoslovak Legion/Corpus withdrawing to the east along the trans-Siberian railway. In a hopeless situation on 10 January 1920, at the station of Ujar (formerly Klukwiennaja) the division capitulated against the Bolsheviks on honorary terms.

Ca. 44,000 Polish Army soldiers listed as missing ended up in permanent Soviet captivity. Many more were actually held in captivity but of these many fled or were returned after changes on the front, and they were not counted in this category.

Approximately 8,000 soldiers together with Colonel Walerian Czuma, the Commander-in-Chief of the Polish Army in Eastern Russia and Siberia, laid down their arms. The rest tore through to the east with their arms in their hands, to Harbin, from where they returned to the country by sea. They formed the core of the Siberian Brigade that – assigned to the 5th Army of General Władysław Sikorski battling by the Vistula and the Wkra – took part in the Battle of Warsaw.

Soviet command respected the provisions of the capitulation agreement concluded on 10 January 1920. Only the families of soldiers remained free, and without any food supplies. Younger officers were locked in a prisoner of war camp while the older ones, from the rank of captain and up, were jailed. 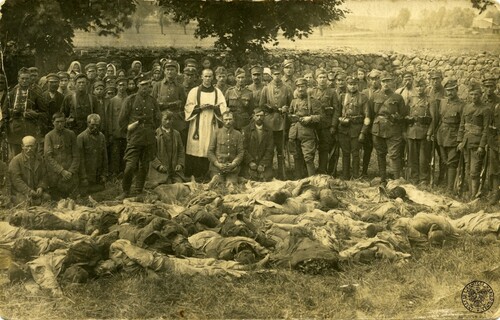 Bodies of Polish soldiers murdered and fallen near Leman at the cemetery in Kolno, August 1920 (author: Stefan Mroczkowski, photo from the collections of the Institute of National Remembrance)

This included Colonel Czuma. The position of civilians and prisoners of war was tragic as – contrary to the capitulation agreement – they were plundered even of their personal belongings and documents. From the common soldiers who did not agree to being incorporated into the Red Army, working detachments were formed, which were sent to work in coalmines or to fix railway infrastructure.

Pursuant to the provisions of the repatriation agreement, the exchange of prisoners of war began in mid-March of 1921. It took place at two border points: at the railway stations of Negoreloe near Koydanov (on the Soviet side) – Stołpce (on the Polish side), as well as at the station of Zdołbunów (for both parties, it was located in Poland).

The longest repatriation procedure was for the POWs of the 5th Rifle Division and their families from Siberia. Firstly, most often under the bare sky, they awaited transport for weeks on end, and subsequently they travelled by train in very primitive conditions sometimes even for several months, receiving poor food rations (generally a quarter pound of bread a day). This resulted in mass infections (e.g. in January 1922, 60% of the POWs were ill), and deaths on the return route to the country. The Soviet authorities attempted to detain qualified tradesmen, which is why they hindered their repatriation. Diplomacy needed to intervene in the case of many people, e.g. Colonel Czuma only returned to Poland on 22 January 1922.

From March to July 1921, 10,694 POWs arrived in Poland via Negoreloe, and via Zdolbuniv – 5,762. From July to December that same year 12,119 and 3,791 POWs returned to the country respectively. Later the numbers clearly decreased. From January to July 1922 2,473 soldiers returned from Soviet captivity.

The exchange of prisoners of war began in mid-March of 1921. It took place at two border points: at the railway stations of Negoreloe near Koydanov (on the Soviet side) – Stołpce (on the Polish side), as well as at the station of Zdołbunów (for both parties, it was located in Poland).

In total, from March 1921, when the campaign began, until mid-1922, 34,839 prisoners of war returned to Poland. After adding those who had simultaneously returned from Soviet camps, prisons, labour divisions, hospitals and during transport (there may have been several hundred of them), we have approximately 35,500 prisoners of war that have returned to the country. By November of 1922, when the return campaign was practically concluded, several hundred more POWs may have arrived.

The repatriation was voluntary hence a small number of prisoners (approx. 2,000 – 3,000) decided to remain in Russia for different reasons. According to the data of the Office of the Polish Central Committee of the Communist Party of Russia from 1 March 1922, approx. 8% of prisoners of war did not wish to return, which was the equivalent of approx. 3,000 people. This results in a total of approx. 38,500 – 39,000 prisoners subject to repatriation.

The attitude of the Soviet political and military powers toward the Polish prisoners of war changed dependent on the course of the war. However, the Bolsheviks generally considered the Polish society (and the Polish Army) as a community in which “the proletariat of the cities and villages battles against reactive elements”. That is also why the most diverse actions were undertaken with the aim of leading to the internal breakdown of the Polish armed forces, “pulling” the common soldiers onto one side (originating from the “peasant and labouring masses”) and, with their cooperation, leading to the outbreak of a revolution in Poland. The positions and activities of the POWs that qualified as anti-Soviet, were ruthlessly overpowered. Alongside the remarkably strong propaganda campaign, on the one hand, an entire range of repressive actions were applied and, on the other – incentive and promises of socio-living privileges. 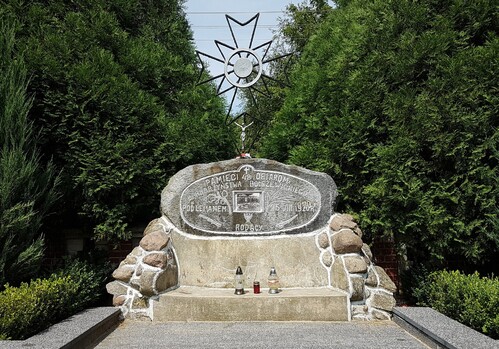 Statue at the cemetery in Kolno in commemoration of the soldiers murdered and fallen near Leman (photo by T. Stempowski)

The fate of the Polish prisoners was relatively bearable until spring of 1920 when there were few of them and they were predominantly exploited in agricultural works in the European part of  Russia (the fate of the 5th Division has been described separately). At the height of the Polish-Bolshevik war, the situation of the POWs deteriorated significantly – there were many more of them, they were subjected to all types of harassment, plundered, starved, forced to work for a dozen or more hours a day (in coalmines, deforestation, loading and unloading of train carriages and ships, railway construction). In autumn the camps experienced an outburst of epidemics of spotted typhus, dysentery and scurvy. The sanitary conditions were very poor, there was no running water, no sewage, prisoners were bathed at a bathhouse once a month, their undergarments were changed once every several months, insects were everywhere. Food was often down to a pound of bread a day and, due to the lack of wood or fuel, there was no soup nor were the rooms heated.

The Bolsheviks attempted to form the 1st Polish Red Army in 1920 using POW-deserters and forcibly mobilised prisoners of war, which, together with other incorporated categories reached approx. 1,000. After entering into a truce in October 1920 it was formally disbanded, and its soldiers subjected to intense ideological training so that, following their return to Poland, they would propagate communist ideals or run antinational activities.

Although official Soviet orders commanded the generous treatment of POWs, based on class assumptions and intelligence requirements, this wasn’t always the case in practise. A series of incidents of murdering POWs are known, in particular of those considered to be “class enemies”, soon after taking them captive, or mass crimes on surrendering defenceless soldiers.

War crimes of the Soviet cavalry

There were especially numerous incidents of killing POWs in the First Cavalry Army of Siemion Buddiony. The dominant view among its soldiers was that the cavalry cannot be burdened with POWs as, owing to this, it would lose its greatest asset, which is the its fast pace of action.

On 22 August near Mława Gaya’s soldiers murdered 150 POWs from Poland’s 49th Infantry Regiment in the cruellest way. Within the scope of repression the head of the 5th Army, General Władysław Sikorski commanded not taking any POws from this formation. On 24 August at the site where the Polish soldiers had perished, 200 Cossacks were executed.

One of the cruellest crimes was committed by Budionny’s cavalrymen  on 17 August 1920 by Zadwórze (east of L’viv) where over 300 defenders perished from sabres and bullets. This same doctrine and practise was in force in the 3rd Corpus of the Cavalry, comprised mainly of Cossacks, headed by Comcor Gaya Gai Bzhishkyan. This formation, moving in summer of 1920 on the northern wing of the Bolshevik armies, advanced the furthers, attempting to cross the Vistula near Płock and circumvent Warsaw from the west. After launching the Polish counteroffensive, it desperately attempted to get through to the east. On 22 August near Mława Gaya’s soldiers murdered 150 POWs from Poland’s 49th Infantry Regiment in the cruellest way. Within the scope of repression the head of the 5th Army, General Władysław Sikorski commanded not taking any POws from this formation. On 24 August at the site where the Polish soldiers had perished, 200 Cossacks were executed.

Approx. 44,000 Polish soldiers remained in Soviet captivity. Taking into account that between 35,500 – 36,000 returned to the country, a maximum of 3,000 remained in Soviet Russia voluntarily, it can be assumed that we know of the fate of ca. 39,000 Polish soldiers – Soviet POWs. Ca. 5,000 POWs are missing from the balance. Thus we do not know: whether they were killed or died in transit between POW assembly points or during transport to camps, or whether they were murdered in camps or jails, died at camps or during repatriation transport, or whether they died in unknown circumstances. In order to at least partially clarify what happened to them, it is necessary to carry out archival research in Russia and the Ukraine. 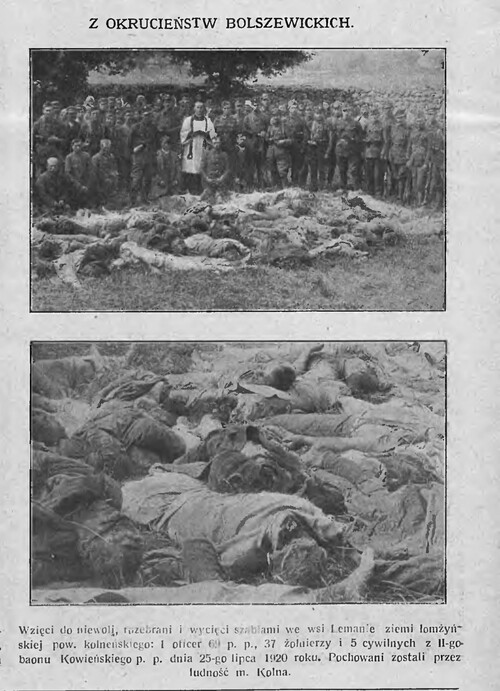 Reproductions of pictures of soldiers fallen near Leman, published by the “Tygodnik Ilustrowany” issue no. 39 from 25 IX 1920