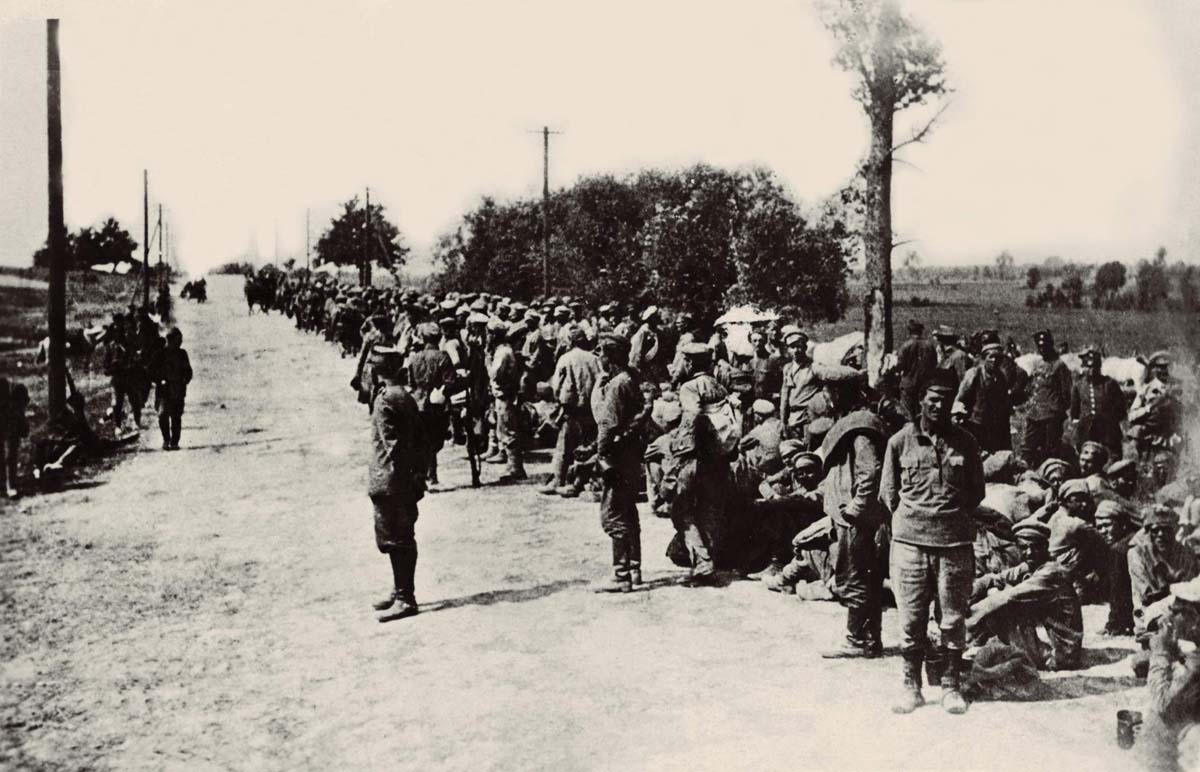 Author: ZBIGNIEW KARPUS 17.08.2020
As a result of the defeat of the central countries, prisoners of war, interned persons and those forcibly taken to labour camps – citizens of the former Russian empire – began returning to their homelands (Russia, Ukraine, Poland, the Baltic nations).

The first groups on the lands of the Polish Kingdom, freed from German occupation, already appeared in mid-November of 1918, i.e. the period of the formation of the centre of power of the reviving independent Polish state. Russians hurried home mainly using communication routes through Poland, from west to east. 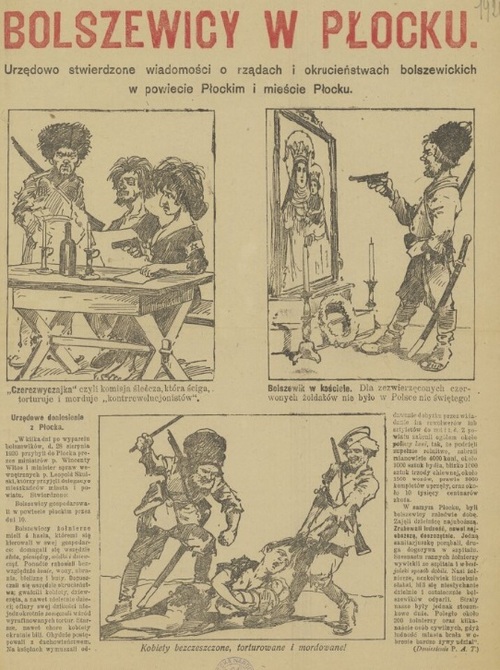 Official news of cruel rules and crimes committed by the Bolsheviks at the Płock region and the city of Płock, print from the year 1920

The first stage for them, before their further journey to the east, was Warsaw, the main railway hub, where they were gathered in post-German barracks at Powązki. Inter alia the first transport of Russian POWs set off from Kalisz to Warsaw immediately following the evacuation of the Germans on 14 November. These transports were used by Russians to travel home after being held at the POW camp in Szczypiorno. In general, on the days of 14–16 November 1918 alone, 14 thousand POWs were sent from Kalisz.

The process of evacuating POWs and Russian labourers from Germany to the east took place spontaneously and without any impediments from the German authorities. Thus they attempted to rid themselves of those they no longer wanted to hold, especially given the difficulties with provisions and, as the Poles suspected, they were also motivated by a wish to destabilise the situation in reviving Poland. From 15 November 1918 to 20 January 1919 a total of 281 thousand Russians reached Poland. On the clear demand of the Polish authorities, the countries of the Triple Entente prohibited, from 22 January 1919, the directing of transports with Russian POWs and labourers to the east through Polish territory.


In the initial period of war with the Bolsheviks...

At this time the Polish-Soviet war began, which wasn’t very intense initially, which is also why the number of prisoners of war on both sides wasn’t overly large. In November 1919 (i.e. during the time when battles were suspended and prognoses were ongoing in Mikashevichy) there were 7,096 Bolshevik POWs in Poland (this is the number given in Polish military documents from the time). This issue wasn’t touched upon during talks in Mikashevichy.

The Polish side attempted to ensure proper living conditions for the Bolshevik POWs at the camps. This was not always possible. It should be noted that, during the period of autumn and winter at the turn of 1919 and 1920, some of the camps experienced difficulties in food supply and sanitary conditions for their prisoners. This was noticed, inter alia, by the Polish press and the Sejm, whose delegation visited individual POW camps and presented its report at an open air conference. As a result of the intervention of the MPs, in spring of 1920, the POWs’ situation clearly improved in the camps, and the Bolshevik POWs were directed to work in agriculture and state institutions. In this manner their living conditions (both alimentary and sanitary) improved significantly. 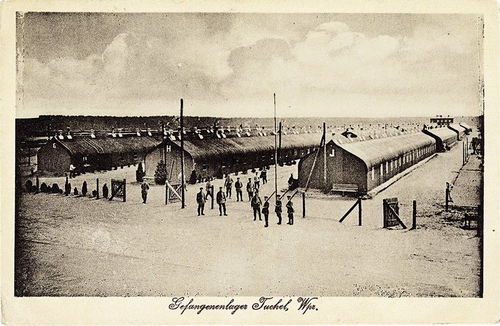 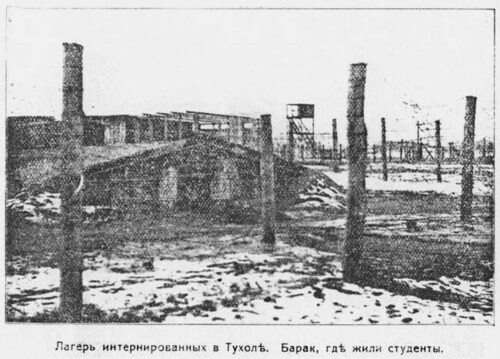 Internment camp in Tuchola during the Polish-Bolshevik war (public domain)

In the initial period of war with the Bolsheviks...

Extensive problems with Bolshevik POWs began for the Polish authorities only after the victorious Battle of Warsaw. As a result over 40 thousand Red Army soldiers ended up interned in Poland, and continuing military actions added significantly to this number. After the Polish-Bolshevik battles were completed (i.e. after 18 October 1920), Poland ended up with ca. 80 thousand Soviet POWs. A further 25 or so thousand Soviet POWs had volunteered for anti-Bolshevik military detachments forming in Poland.

The Polish side experienced extensive difficulties in duly dealing with their fate, especially as regards the autumn and winter cold. The Polish authorities were thus also faced with other important issues requiring urgent attention. This included the issue of 50 thousand interned soldiers and their families from former military detachments allied with Russia and Ukraine which, toward the end of November 1920, again found themselves in Poland. The problem arose of ensuring such a large number of POWs and prisoners the appropriate lodgings and sanitary, medical and alimentary care.

The first official document concluded between Poland and Soviet Russia, which mentions care for the POWs, was an agreement signed on 6 September 1920 in Berlin by representatives of the Polish and Russian Red Cross. It was intended to be carried out through the intermediary of delegates appointed by the Polish and Russian Red Cross. In Poland Stefania Sempołowska was in charge of Bolshevik POWs and civil prisoners, however, in Soviet Russia care for the Polish prisoners was to be the domain of Katarzyna Pieszkowa. By virtue of the armistice agreement dated 12 October 1920, Joint Commissions were to be appointed immediately (they finally came into existence in May of 1921).

Prior to the signing in Riga of the repatriation treaty on 24 February 1921, an attempt was made at managing the exchange of POWs on the basis of names lists. It soon proved that neither of the two parties was prepared for a quick exchange of POWs.

Ensuring the appropriate living and alimentary conditions, as well as medical and sanitary care for ca. 150 thousand prisoners and POWs (not just Soviet ones) in the years of 1919 – 1921 was a difficult task for the emerging Polish state. An important factor needing to be faced were epidemics of infectious diseases rampant not only among the military, but also experienced by the civil populations. 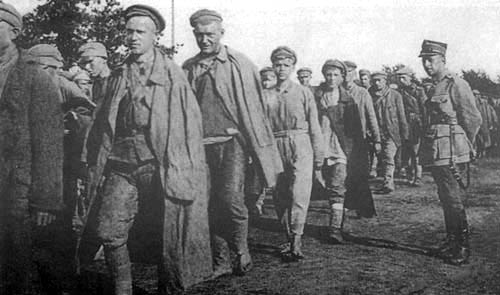 Column of Soviet prisoners on the way to the camp in Rembertów, 1920 Photo by J. Zimowski, from the collections of the Museum of the History of Photography in Cracow (public domain) 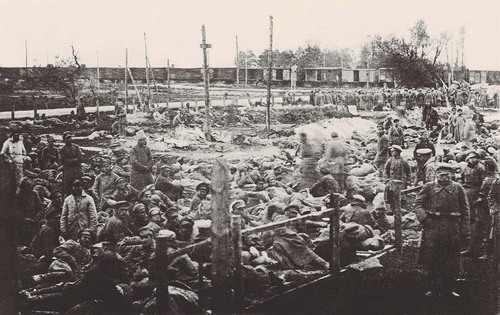 Soviet prisoners captured after the battle near Radzymin, 1920 (public domain)

After getting captured, the POWs were subjected to obligatory sanitary procedures (bath, change of undergarments, disinfection of clothing) as well as medical examinations. Ill POWs were not to be sent to camps in the country’s interior but placed in special wards of hospitals on the fronts, and later in special hospitals for POWs. Medical care was also available at every POW camp. Medical personnel ran an infirmary, pharmacy and hospital, usually with an isolation ward.

In 1919, when ca. 29 thousand prisoners and POWs were held in camps around Poland (including 7 – 8,000 Soviet prisoners), this system operated rather effectively although, even then, it was not fully possible to control the spread of infectious diseases. Following the situation at the camp in Brest when, as the result of an epidemic, ca. 15 thousand POWs died (including approx. 500 Bolshevik POWs), this camp was closed. Its victims also included Polish medical personnel, e.g. the head doctor of the Brest camp died from spotted typhus.

Subsequently a difficult sanitary and alimentary situation, as well as the return of an infectious diseases epidemic in POW camps in Poland occurred in late autumn of 1920. At that time there was a sharp rise in the number of POWs and prisoners, and their situation was greatly influenced, inter alia, by the loss of a large amount of specialist sanitary and medical equipment during the Polish withdrawal of summer 1920, as well as the destruction of large parts of the country through which detachments of the Red Army passed. The capture of former allies in battle with the Bolsheviks gave rise to the need for transferring Soviet POWs to other camps. They were transported in inadequate conditions during a severe winter, which caused a subsequent outbreak of epidemics of cholera, typhus, influenza and dysentery. During the worst months of the epidemic, at the turn of 1920 and 1921, at the main POW camps, 1,682 people died in Strzałkowo in November and 1,558 in December, while 561 died in Tuchola in January. Afterwards the situation at the camps was brought under control. 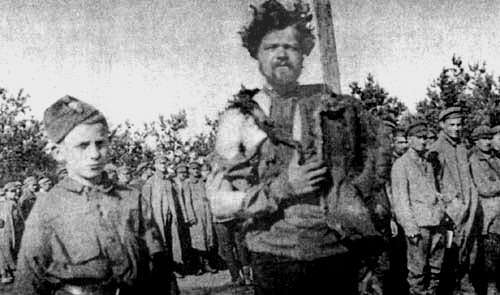 Soviet prisoner guarded by an underage Polish soldier, 1920 Photo by J. Zimowski, from the collections of the Museum of the History of Photography in Cracow (public domain) 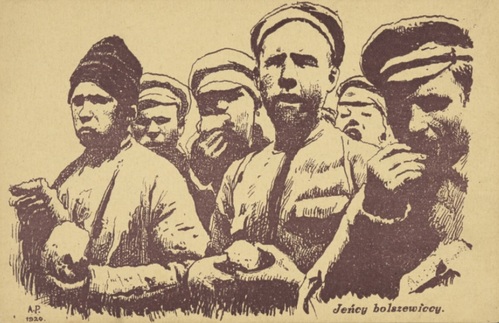 During the entire duration of the stay of Soviet POWs at the camp in Strzałkowo (June 1919 – October 1921) 7,000 – 8,000 of them perished there and, in Tuchola (late August 1920 – mid-October 1921) – ca. 2,000. On the basis of many preserved sources it is possible to determine that, during their entire stay in Poland, ca. 14 – 16 thousand Soviet POWs lost their lives in Polish captivity. They were buried in mass graves at camp-side cemeteries. During the entire inter-war period they were under the care of the Polish authorities.

Pursuant to the repatriation arrangement from mid-March to mid-October of 1921, 65,797 Soviet POWs were sent from Poland and, by the beginning of 1922 – a further 965. Also 2,001 civilians returned to Soviet Russia. Approximately 1,000 people declared the will to remain in Poland. Aside from this number, approx. 1,000 former Red Army soldiers returned from Polish captivity to other countries.