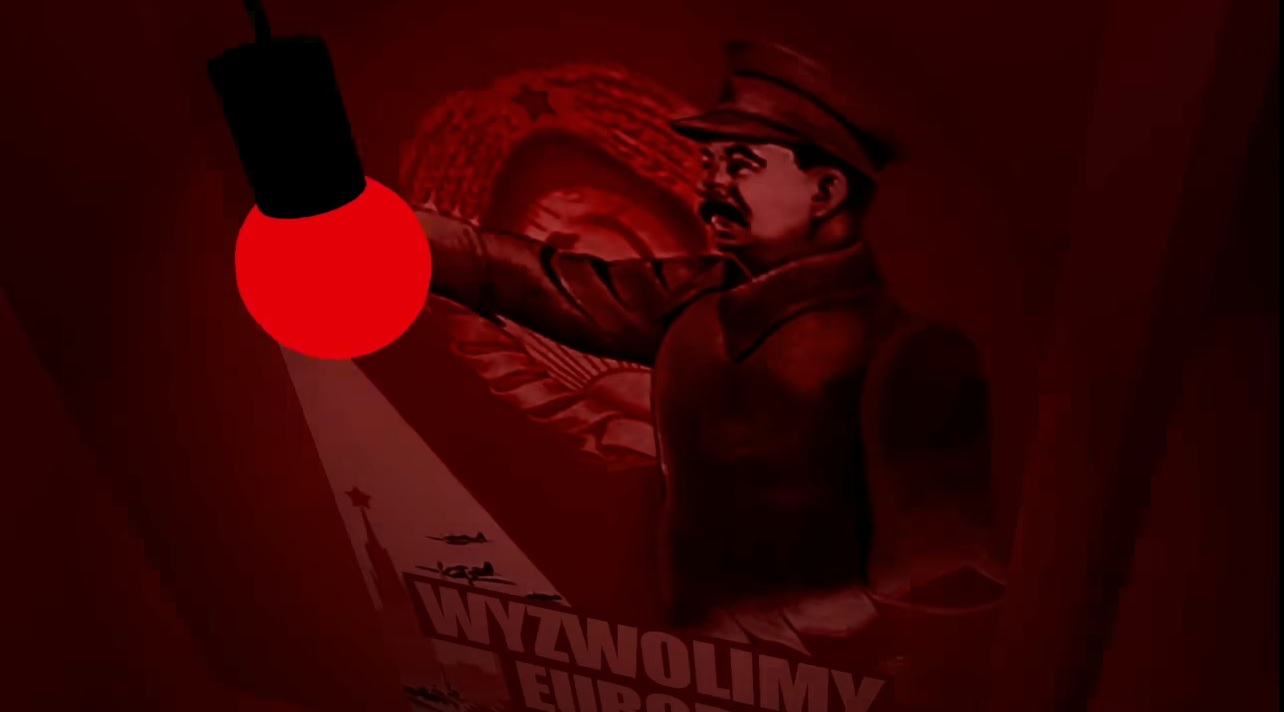 Author: MIROSŁAW GOLON 11.05.2020
Victories of the Red Army ended the German occupation of Poland which brought millions of victims. However, the same Amy, which had the NKVD (People’s Commissariat for Internal Affairs) and SMERSH (military counterintelligence) in its structures, did not bring back the lost independence nor provided safety to the country’s citizens.

Poland became the victim of the expansion desires of Moscow marked by mass repressions. Although this time, Stalin, contrary to 1939, was taking control of the entire Poland. The satellite model of dependence would not be possible without the total annihilation of the Polish Underground State.


As a conqueror and enemy

The Red Army crossed the Polish border near Sarny on January 3rd, 1944. It did not act as an ally, but rather as a conqueror and enemy.  The Polish underground was either fought with by the invading army, by the NKVD or by the red guerrillas. Nonetheless, the structures of the Home Army were so strong that they even played an important role in i.e. driving out the Germans from Vilnus, alongside the Red Army soldiers. Right after that victory, repressions began. Home Army Commander, Col. Aleksander Krzyżanowski was arrested by the NKVD on 17.07.1944. He returned from a gulag in 1947. Soon after that he was arrested once again and on 29.09.1951 tortured to death in prison on Rakowiecka street in Warsaw, the worst Stalinist torture facility in Poland.

Another symbol of the operation “Gate of Dawn” was Col. Maciej Kalenkiewicz. In August 1944, he fought a heroic battle at Surkonty, where the NKVD killed or finished off more than 50 of his soldiers. There were many battles such as this, and their main goal was the defence of the repressed population.


In the lands included in the USSR

On 31.12.1944, in the city of Lviv retaken together, the NKVD began mass arrests of the Polish leaders, including the chief commander, Col. Władysław Filipkowski. He was released from a camp in 1947 and died prematurely in 1950. The Polish units taking part in operation “Tempest” were either repressed or fallen in battle due to the lack of sufficient support. What happened in the lands taken by the USSR was nothing short of a massacre of the underground. The Soviets used massive amounts of military and police assets to conduct cruel pacifications.

Several million civilians, who remained in their hometowns after the front passed them,  found themselves in a dramatic situation under the USSR’s rule. The terror of the political police, terrible living conditions and anti-Polish actions in both political and cultural spheres, often forced them to leave. The change in the borders was done not because the citizens wanted it, but due to the ruthless military force.


At the Lublin region

In the summer of 1944, the Red Army entered the part of the lands which were to be included in the new Poland, dependent on the USSR. Local communists with weak support were to rule, so the operations of destroying the underground were also undertaken there. The NKVD organised a network of prisons where thousands of Poles lost their lives, i.e. in Lublin and Rzeszów, as well as in other places like Nowiny and Majdanek. The operational groups of the NKVD, on its own or with the Security Office, terrorised the Polish population with murders and tortures. The killing was sometimes done on massive scales, i.e. in the NKVD camp in Krzesimowo and Głogowskie Forests (Turza near Rzeszów).

The repressions of the Home Army in the summer of 1944 made it impossible for many troops to support the Warsaw Uprising. In October, immediately after it fell, the Soviets tightened the terror. Not only the officer cadres but most of those who had any connections with the Home Army were repressed. However, the Underground still had a lot of potential. To strengthen the repression forces, the Cumulative Division of the NKVD was organised in October of 1944. It reinforced the NKVD and SMERSH, already counting several dozen thousand officers, operating near the fronts. If needed, the military units or the NKVD armies from Belarus and Ukraine were used as well. With these forces, the Białostocki region was pacified with almost 3 thousand Poles taken to gulags by force in November 1944.

One of the most important consequence of the Russians taking the Polish lands was transforming the model of power to a Soviet one, including the political police. Since the beginning, the Security Office enlisted the cadres trained by the NKVD. It was one of the biggest Soviet crimes. Such institutions would not come to life if not for the Red Army and the NKVD. The facilities of the Security Office were typical torture chambers. Thousands of Poles lost their lives there or because of them, several hundred thousand left them with permanent damage to their health and millions lost their freedom and sense of security. The total number of arrests conducted by the NKVD and local repression formations, mainly the Security Office, at the Lublin region of Poland since October 1944 until the end of the year was 13 thousand, out of which ¾ were detained for the being part of the Home Army. Most of them were arrested by the Soviets themselves.

The January offensive of 1945 led to the taking of all the lands of the Second Republic of Poland in three months. The Soviet formations counting several million officers also strengthened their police structures. It was realised i.e. in enlisting NKVD representatives for the fronts commanded by the Generals of the Ministry of Public Security. They organised the operation of repressing those determined as “enemies”, kidnapping hundreds of thousands of civilians, including many Poles, and taking them to gulags. The NKVD officials were also responsible for the theft and transport of war loot and other economical exploitation of the taken lands.

In the total toll of arrests conducted by the Soviet formations in Polish lands (without the lands included in the USSR) as much as 215 thousand people were noted, out of whom 138 thousand were supposedly Germans, while Poles nearly 39 thousand. The NKVD had a tendency to acknowledge the change of citizenships forced by the Germans, so at least another several dozen thousand were actually Poles.

Two great figures almost symbolically illustrate the picture of the Communist terror. Gen. August Emil Fieldorf, greatly distinguished soldier who served i.e. as the Chief Commander of Diversion in the Home Army, was arrested on 7.03.1945 by the NKVD. He was taken to the Ural mountains. Extremely exhausted, he returned to Poland in 1947. As a result of a puppet trial, he was executed at the Rakowiecka prison in 1953.

Another symbol is the last Commander of the Home Army and “NIE” organisation, Gen. Leopold Okulicki. Arrested on 27.03.1945 in Pruszków in a provocation of the NKVD organised by Gen. Serov. On that day, 16 leaders of the Polish Underground State (secret structure of the Polish state, in existence during the Second World War, subordinate to the Polish government-in-exile) with vice prime minister Jan Stanisław Jankowski. In something resembling a parody more than a regular trial, orchestrated by Stalin in Moscow, Okulicki was sentenced to 10 years in prison. He never got to the end of the sentence. He was murdered in a prison in Butyrki on 24.12.1946.


“Augustów Roundup” and other Soviet crimes

Among the crimes of the Red Army a special place has the so-called “Augustów Roundup”. In July 1945, a horrific pacification was conducted in the Augustów and Suwałki regions. Almost 600 people, accused of being part of the Home Army, were murdered. The genocidal operation was conducted by the forces of the 3rd Belarusian Front. The places of burial have not been uncovered by Russia to this day.

The Soviets were also responsible for thousands of murders committed on individual Poles or small groups. In example, in November 1945 soldiers of the Red Army murdered Lieut. Roman Dziemieszkiewicz, the Commander of the National Armed Forces for the Ciechanów region. His younger brother Mieczysław, codename “Rój”, for more than five years he later fought against the Communist terror.

To this day, the scale of the Soviet crimes between 1944-1945 has not been precisely determined. What is certain, is the fact that there were thousands of victims. Poles died as a result of the pacifications done by the Communists “on the occasion” of robberies, especially if they were protested, in defence of the hurt citizens i.e. raped women or in cases of self-defence. These victims had been hidden by the Communists for years and forbidden to be published about or their history manipulated.

Apart from the political repressions, Poland was economically exploited in 1945. It came in the form relocating citizens and forcing them to work and also a massive theft of property.

The march of multimillion masses of Red Army soldiers had another consequences as well. First and foremost, it was the mass theft of private and public property but also the common, thoughtless devastation of buildings and their equipment and, especially hurtful, mass rape of women. When Col. Władysław Liniarski created the Citizens’ Home Army in 1945, he especially underlined the Soviet rapes and robberies from which the Polish soldiers should protect the citizens. In the shared memory, the picture of these countless wrongdoings remained strong, even though they had been hidden, what to this day makes it difficult to prepare a precise toll. Nonetheless, the number of reports of eyewitnesses and other materials regarding this matter is enough to come to the conclusion that the criminal behaviours of the soldiers of the Red Army were not exceptions, but a norm.

The article was published in cooperation with Polska Press