You came here not to a sanatorium, but to a German concentration camp

Historical era
(1939-1945) II wojna światowa
Author: MARTYNA GRĄDZKA-REJAK 24.01.2020
In the spring of 1940, the Germans began to organize a camp for political prisoners in Auschwitz (Oświęcim, before the war), which was then within the territories incorporated into the German Third Reich. On June 14, 1940, a transport arrived from Tarnów with the first Polish political prisoners.

The pre-war prison at 17 Konarskiego Street in Tarnów was transformed into a political prison Sicherheitspolizei - German security police - during the German occupation. From there, in June 1940, the first mass transport of prisoners was selected and transported to KL Auschwitz. On June 13, according to a prepared list, 753 people were summoned from the 911 prisoners at the time. In the afternoon, this group was taken to the bathhouse building for disinfection and bathing. The next day at dawn, they were escorted to the railway station under German police escort through the deserted streets of the city. One of the prisoners from this transport, Jerzy Bielecki, recalled the route of the march:

"This bleak procession of prisoners moved from Pod Dębem Square along Wałowa Street, Krakowska Street to the railway ramp there, where they were hurriedly crammed into previously prepared wagons".

Eugeniusz Niedojadło, also deported to Auschwitz at the time, wrote about the procession:

"it slithered among the streets like a long snake – it made the impression of a herd being rushed to the slaughterhouse. The gendarmes' screams faded but did not cease. We were serious and depressed. There were local inhabitants of Tarnów among us - it was probably the most difficult for them. [...] here and there, faces hidden behind the curtains could be seen in the windows. The frightened disappeared quickly and soon appeared again. This city, stunned by terror, experienced the huge transport in two ways...".

Despite the fear and awareness of the threat from the Germans, Niedojadło reported on one of the gestures that took place then:

"At one point, thrown in by an invisible hand, a bunch of red flowers, trampled furiously with the shoe of a walking gendarme. This is how Tarnów said goodbye to the prisoners: quietly ... secretly ... cordially".

Most likely, around 25 people were sent back to prison at the Tarnów station. Eventually, 728 prisoners were sent to KL Auschwitz. The transport from Tarnów passed, among others, through Krakow - the "capital" of the General Government (GG). The prisoners could see the train station, where flags with a swastika flapped, from the wagons. They heard through megaphones that German troops had entered Paris. 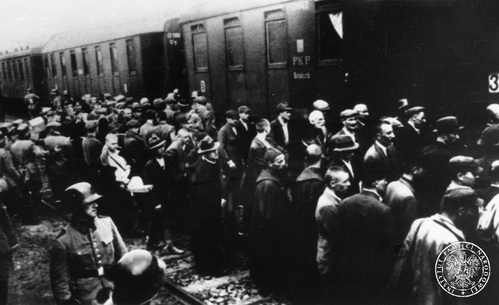 Loading of prisoners from the Tarnów jail to passenger cars at the Tarnów railway station (one of the first transports to depart to KL Auschwitz). Photo: AIPN

After arriving in KL Auschwitz, the prisoners heard the following during an assembly, from the deputy commander of the camp - SS-Hauptsturmführer Karl Fritzsch:

"You came here not to a sanatorium, but to a German concentration camp, from which there is no other way out than through the chimney. If someone does not like it, then they can go straight to the wires. If Jews are in the transport, they have the right to live for no more than two weeks, priests for a month, the rest for three months."

The words heralded the fate awaiting them and the next ones who in the following years crossed the Auschwitz gate. The prisoners from the transport of June 14 were first sent to quarantine. They were placed in the building of the former Polish Tobacco Monopoly, in the immediate vicinity of the camp.

On June 13, according to a prepared list, 753 people were summoned from the 911 prisoners at the time. In the afternoon, this group was taken to the bathhouse building for disinfection and bathing. The next day at dawn, they were escorted to the railway station under German police escort through the deserted streets of the city.

Almost a month earlier, on May 20, 1940, a group of thirty prisoners - German criminals (the so-called Berufsverbrecher - BV) had been serving their sentences in KL Sachsenhausen. They were given numbers from 1 to 30, all of them served as function prisoners. "Tarnów people" - as the people from the first mass transport were called, were given numbers: from 31 to 758. The lowest, "prisoner" number, 31, was given to Stanisław Ryniak, a student of Jarosław construction school. "I have wondered many times how it happened that I was given number 31, the first number of a Polish political prisoner. Perhaps my name was first on the transport list, or maybe it was just a coincidence," he recalled after the war.

Ryniak was fifteen at the time, he came from Sanok. The Germans arrested him during a raid on young conspirators in Jarosław.

Many young, healthy men were brought to the camp in the first transport. They came mainly from the southern part of occupied Poland. Some of them were detained on the borders of the General Government during attempts to escape and get to France, where the Polish Armed Forces were being created. The organizers of the escapes were also sent to KL Auschwitz along with the refugees. Activists of political, underground and social organizations also became prisoners. Some of them were arrested during the AB campaign, i.e. the Extraordinary Operation of Pacification carried out by the Germans in the General Government in 1940. Representatives of the intelligentsia, but also priests and a small group of Jews were among them. Of the 728 prisoners from the first transport to KL Auschwitz, about 300 people survived. Some of them were released after several months in the camp, while others lived there for over four years, becoming functional or special prisoners over time.