Author: ANNA ZECHENTER 01.12.2019
It’s May 5th 1945. Soldiers of the Świętokrzyska Brigade, the only formation of the Polish underground which broke through the German-Soviet frontline, are lying at the edge of a forest in western Czechoslovakia, at the lands occupied by the Third Reich, awaiting orders to attack the German concentration camp Holiszów.

The Brigade’s command decided on the operation with the coming Americans, who two days earlier bombed the weapons factories in Holiszów.

The boys from the Brigade know, that Berlin is close to falling, and an uprising is led by the Communists in Prague. They live by a hope, that the Americans will come first – since in front of them is the might of the Red Army, and behind them – many weeks of almost superhuman efforts to escape the country, before it’s crushed by the Soviet avalanche.

Break through to the West

The group consisted of these soldiers of the National Armed Forces, or NSZ, who refused to fall under the Home Army and formed the Świętokrzyska Brigade in August of 1944, under the command of Col. Antoni Szacki codename “Dąbrowski-Bohun”. They adopted a different way of fighting than the Home Army – they fought against two enemies, both Germans and Soviets. They hurt the latter, by eliminating units of the People’s Army and hitting the structures of the Polish Workers’ Party, which robbed, murdered and raped the Polish population in the Kielecczyzna region.

They marched quickly between the carts and wagons of German population retreating in masses to the west, constantly hearing the Soviet artillery barrage behind their backs.

The advancing Soviets had their own, unresolved business with them: for the crushing of a large group of the People’s Army led by Grochal “Tadek Biały” in Autumn 1944, as well as the unit of Soviet military intelligence led by Ivan Karavayev; for catching and eradicating members of Communist groups by the moving patrols of NSZ; for freeing members of the Polish underground from prisons and village jails; finally for eradicating the Soviet radio station of the Częstochowskie province, in October of 1944.

When the big Soviet offensive launched in January 1945, they received an order from the General Commander of the NSZ, Col. Zygmunt Broniewski: “The Brigade is to retreat to Silesia. We can’t offer any help. You have to count on your own strength”.

They marched quickly between the carts and wagons of German population retreating in masses to the west, constantly hearing the Soviet artillery barrage behind their backs.

Only a crazy person could hope, that the operation of breaking through to the American occupied territories could be successful, especially with so little weapons. Nonetheless, they had no choice. The plan to retreat to the west was also in accordance with the thoughts of the Supreme Commander-in-exile Gen. Sosnkowski, who wrote this to the Commander of the Home Army in the summer of 1944:

“You are authorised, if needed, to retreat […] the most threatened elements of the Home Army, especially the youth (to the west, towards the Slovakian-Hungarian border). In extremis, I allow you to pull back those elements beyond the borders of the Country, with the order to break through to our forces-in-exile.”

The Germans, with whom the Brigade fought many battles, including the biggest one in September 1944 near Cacow, where it defended itself against 400 airmen and 100 gendarmes with machine guns, were still a serious threat to the soldiers of the NSZ. 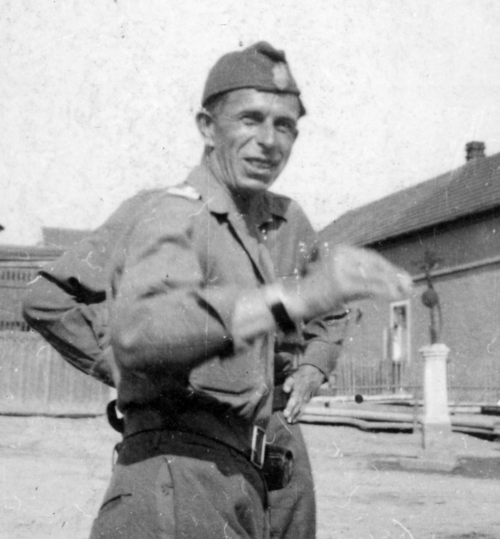 The commander of the Świętokrzyska Brigade of the NSZ Col. Antoni Szacki codename “Bohun”, “Dąbrowski” after the end of the war in Czech Republic and Germany 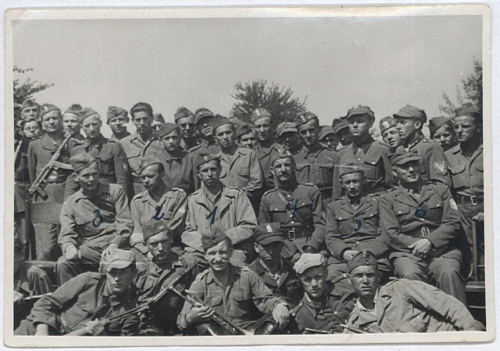 Soldiers of the Świętokrzyska Brigade

Already on January 15th, two days after receiving the order to break through to the allied forces, they reached the Pilica river, which was heavily defended by the Germans. Just behind them, the Wehrmacht led a hopeless resistance against the pushing Soviets. With each passing hour, they found themselves more and more between a rock and a hard place.

The command managed to establish communication with the 3rd American Army under Gen. George Patton – this was the goal of the excruciating march and the condition of the Polish unit’s survival. Due to political reasons, establishing contact with the government-in-exile and the II Corps of Gen. Anders was equally important, to notify the legitimate authorities of the existence of the group counting almost two thousand people.

The luck was with the Poles: they captured several Germans, whom the commander of the Brigade sent back with an ultimatum: either the Germans let them cross the bridge near Żarnowiec, or they attack them. There was no other choice than this desperate plan, since the Soviet tanks, having broken through the frontline, drove straight towards the river. Not waiting for the German response, Col. Szacki ordered to cross the bridge. When all the units did so, the Soviet fire reached the last wagons of the refugees – the Brigade escaped the death trap.

On the other side of the river, in Żarnowiec, they walked right into the German tanks.

“We were moving forward with our weapons ready to shoot” – remembered Wiesław Widloch. “Three Germans stood at the pavement aiming their submachine guns at us. One of them started to come closer, but when he saw the barrels of our weapons, he stopped. And we stood like this, aiming at each other, ready for anything, maybe for thirty minutes. Suddenly, we began running, fast”.

They crossed both Pilica and Odra without a confrontation with the Germans, but they still had the Soviets breathing down their necks.

The order of Col. Szacki from January 19th explained the Germans’ surprising compliance:

“In order to save the Brigade, I made an agreement with the German command to go through their lines to the west. In effect, we came to a ceasefire for the time being. I hope, that the accelerating circumstances of war will allow us to report to the Supreme Commander in the not too distant future.”

“I breathed… the Americans”

To keep the state of “ceasefire”, the Polish commanders had to be very diplomatic: they had to accept the German order to march towards Czech Republic and at the same time protect their soldiers from playing the role of the Third Reich’s allies.

The Brigade had to face, in accordance to the German demands, a winter march through the Sudety mountains – through deep snow, in ragged clothes and on the verge of complete physical exhaustion. They took it all, only to get as far away as possible from the Red Army. They marched towards Pilsen. The chaos that prevailed near the frontline, only made worse by the retreating German troops and Ostlegionen, was favourable for the Poles: it was easier for them to blend in, in all the commotion.

At noon came the order: “Advance!”. The surprised German crew did not defend themselves for long, the gate was opened by the pressing Poles, who ran into the camp and opened all the barracks, full of female prisoners: French, Polish, Czech, Romanian… They took 200 soldiers and officers of the SS and 15 female supervisors as prisoners.

On the way, the Brigade grew in numbers by taking care of the escaping POWs from the Warsaw Uprising, Poles sent to labour and prisoners from the concentration camps, who did not want to return to the Communist-ruled country.

The command managed to establish communication with the 3rd American Army under Gen. George Patton – this was the goal of the excruciating march and the condition of the Polish unit’s survival. Due to political reasons, establishing contact with the government-in-exile and the II Corps of Gen. Anders was equally important, to notify the legitimate authorities of the existence of the group counting almost two thousand people.

A group led by Capt. Stefan Celichowski “Skalski” marched to meet the American on April 30th 1945.

“We are heading towards the American artillery battery, which we can hear more and more clearly” – recalled Capt. Celichowski. “The dawn comes, the forest ends and we come to the village houses. Vis a vis on the rooftop lie two soldiers. I’m thinking <<I’m eighty percent sure they are Americans, but if it’s some stranded SS unit…>> They fired a warning shot and we had to come out.”

They waived a white flag and stayed close to the forest line, while the unknown soldiers were running towards them.

“I hear them shout and…  I don’t understand a word. I breathed… Americans”. Taken to the division command, they were welcomed with shock, but also sincerity: “I felt like the same allied soldier and officer as they were. The higher American officers stressed that all the time” – wrote Celichowski.

“Will anyone ever believe me?”

They quickly began working on the operation planned by the National Armed Forces to liberate the women’s camp in Holiszów. Every minute counted, since the SS crew got the order to eradicate the camp. On the dawn of May 5th 1945, soldiers of the Brigade were looking from few hundred metres at the barbed wire surrounding the camp. One of them, Wiesław Wieloch, remembered thinking: “If I ever walk out of this alive, will anyone believe me, that I was liberating a German concentration camp?” At noon came the order: “Advance!”. The surprised German crew did not defend themselves for long, the gate was opened by the pressing Poles, who ran into the camp and opened all the barracks, full of female prisoners: French, Polish, Czech, Romanian… They took 200 soldiers and officers of the SS and 15 female supervisors as prisoners. 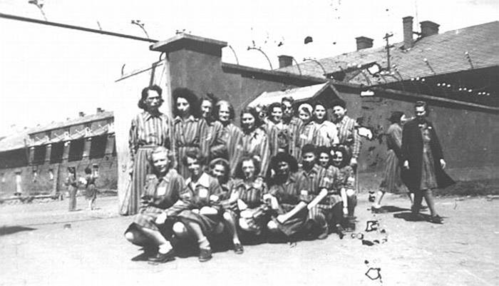 Female prisoners of the German concentration camp for women in Holiszów

Col. Szacki drew his attention to two barracks surrounded by a live wire and the thin faces looking from behind small windows. They were Jewish women, whom the Germans were to burn alive. “I wanted to come in, but the horrible sight stopped me at the entrance” – admitted the officer. “A terrible stench of decaying bodies came from the shadows inside. From the gloomy depths, the women who were still alive crawled outside”.

The last things they needed to do, were to stop the starving women from immediately eating the raw potatoes laying around on piles, and to bring the German crew, which suddenly became very humble, to the Americans. “It turned out, they were all suddenly innocent” – recalled one of the Polish soldiers. “One of them got on his knees, crawled to me and started kissing my shoes”.

For the brigade, came the short days of glory: the fight alongside the Americans ended with capturing the command of the XIII Army, including two generals; the visit of the delegate of the Supreme Commander and his words: “You were and are true Polish soldiers and your actions will make history”; the meeting with the delegation of officers sent by Gen. Anders.

However, in the eyes of the government-in-exile, the Świętokrzyska Brigade was part of the National Armed Forces which refused to merge with the Home Army. At the same time, the Soviets began their hunt for the “fascist” soldiers, while some of them were already being kidnapped by the NKVD.

“London had their quarrel with them since the times of the Home Army. Its liaison officers put much effort into convincing the Americans, that the boys who cried while laying down their hard-earned, scarce weapons – are not soldiers, but mere civilians running away from war to Germany”

- wrote Melchior Wańkowicz, who visited the Brigade in autumn of 1945, after it was moved to Marsfeld in Germany and transformed into guard companies.

Hunted down by the Soviet agents after the war, even in France, where many of them settled, the soldiers went across the Atlantic. Dishonoured by the Communist propaganda of the People’s Republic of Poland, which portrayed them as “German collaborators”, they heard about more and more court sentences for their old brothers in arms from the NSZ. They knew, that nothing but a coffin waited for them back in the country. In the Brigade’s book, it was written: “For years we travel at night, the soldiers of a tragic cause”. Their march has not yet ended…