“Enemy of the Polish People’s Republic” from Argentina

Author: DIANA MAKSIMIUK 10.05.2021
Florian Czarnyszewicz was a thorn in the Communists’ side for several reasons. First and foremost, he dared to put on paper the memory of the tragic fate of Poles from near Berezina river, who fought between 1911-1920 for the return of their lands to the independent Republic of Poland.

[Translator’s annotation - “Nadberezeńcy” is a term describing Poles living in the area near the Berezina river, which until the second partition of Poland was part of the Polish kingdom. The region was characteristic for its Polish, lesser nobility, cultivating Polish traditions  despite being occupied by Tsar Russia. “Nadberezeniec” is the singular form of the term.]

The novel “Nadberezeńcy” was published in 1942 in Buenos Aires. It was the first of four books of the emigrant writer, Florian Czarnyszewicz. It is not known, when exactly did the author begin writing it. What motivated him to write, was probably the information he received from his sister in 1937 about their brother, brother-in-law and several of his friends from the Polish Army being deported to Siberia. As he pointed out himself, he was encouraged to write by the “longing for the homeland lost to Russia and the feeling of being hurt by the Bolsheviks”. From this longing, Czarnyszewicz created the “Epos (with a capital E)”, as another emigrant author, Michał Kryspin Pawlikowski wrote about his novel in a letter to him, in 1949. What’s more, he predicted, that “when normal economical-bookshop relations come back to Poland, <<Nadberezeńcy>> will be as popular as Henryk Sienkiewicz’s <<Trilogy>>”. Unfortunately, Palikowski’s words never came true, due to, among other things, the policy of the Communist authorities of the Polish People’s Republic, who made sure that patriots like Czarnyszewicz, beautifully commemorating the Borderlands, were kept under the rug as much as possible. In Poland ruled by the Communists, “Nadberezeńcy” and other novels of this type had no way of even being reviewed, not to mention published.

“Based on true events”

The first, three-volume novel by Czarnyszewicz is almost an autobiographical story about the uneasy life of the Polish lesser nobility near Berezina river between 1911-1920. The author, in an interesting way, described the story of the region when it was part of the kingdom of Poland before the partitions, then under the Tsar rules, during the First World War, later in the middle of the Russian revolution and being freed by the forces of Gen. Dowbor-Muśnicki, finally during the fight against Bolsheviks. Thus, the novel “based on true events” became an incredible historical source written by a witness of some of these events. Apart from political history, readers can find within the book a colourful picture of Polish traditions of the Eastern Borderlands, as well as the account of everyday life of the lesser, village nobility.

What motivated him to write, was probably the information he received from his sister in 1937 about their brother, brother-in-law and several of his friends from the Polish Army being deported to Siberia.

This “description of wrongdoings by the hands of authorities and compatriots, description of triumphs and hurtful disappointments” Czarnyszewicz dedicated to “Fellow Countrymen from Berezina staying faithful to their Homeland”. He would probably be glad to hear the words, which the London “News” published a year after his death (in 1965). “In 1943 – wrote Marek Święcicki - <<Nadberezeńcy>> were known and read – and how often were they read! – by the Polish military in Scotland. For many of us, it wasn’t just a great book, but also a reminder of our own past, and at least of the fleeting memories of our childhoods at the eastern side of the Riga border of Poland.” This memory was unacceptable for the Communists. Czarnyszewicz became their natural “enemy” and his work dangerous to the regime. Who was the man, who caught the attention of the Communist Security Service?

He was born on July 2nd 1900, in Tucza near Bobruysk. He spent his childhood in the town of Przesieka, which can be found in the novel under the name Smolarnia. Until the outbreak of the First World War, he went to a Russian school. From various letters, we know that “he interrupted his education in the fourth grade of <<Gorodskaya Shkola>>, and that he learned how to write in Polish, thanks to the “home-school teachers from secret Polish schools”. He read a lot. He borrowed Polish books wherever he could – from the Bobruysk library, from various parishes. During the Polish-Bolshevik war, he took “active part in the armed struggle”, first as a scout, “then as the front soldier in the first line”. He served his Country in the 23rd Grodzieńscy Uhlans Regiment. He was part, as he recalled, of the “fight against spies and Bolshevik saboteurs at the Berezina river; retreat to Warsaw; new, victorious march east and in the active fight for Grodno, Lida and Vilnius.”

“Wherever you are, give the tithe of your thoughts and efforts to the Nation, which brought you to this world”.

Following the Riga Treaty and discharge from the army, he moved to the Vilnius region, where he served in the police for two years. In the last half a year, prior to the August emigration to Argentina (1924), he was a “village <<attorney>>” and wrote motions to courts and administrative offices for his townsfolk. The decision to emigrate was most likely driven by several reasons. On one side, it was undoubtedly the economical factor, on the other disappointment with the new Poland, which forgot about all those “who – as Pawlikowski emphatically noted – didn’t need to be Polonised, since they have already been Polonised for centuries; about the brave, tough, hard-working lesser nobility; about the millions of Michniewicze, Tumiłowiczowie, Huszczowie, Kandybowie, Szpilewscy, Czarnyszewicze and many, many others, who were the first to be killed or forced to march to the tundra of Karelia or the mines of the Ural Mountains […] to die and wither” without “any sound or echo”. This fate, met the author’s dearest people – his two brothers – about one of them, Bernard, we know he was the victim of the so-called “Polish operation” in 1937*. In Argentina, where Czarnyszewicz went with his wife Stanisława, maiden name Płosko, and daughter Władysława (born in 1923 in Nowosady), he bound his life to the town of Berisso, where he worked for over 30 years in a local butchery, to then retire at the beginning of 1956. It was there, where he wrote the first two novels, “Nadberezeńcy” and “Wicik Żywica” (the latter published in 1953, also in Buenos Aires), and he worked on the third one – “Losy pasierbów”, which was eventually published in Paris. By then, he had already been living in the house he built himself in Villa Carlos Paz near Cordoba, which is also where his life ended. A year before passing away, he fortunately managed to publish his last novel – “Chłopcy from Nowoszyszki” [“Boys from Nowoszyszki”] (London, 1963). Away from his home country, he was very engaged in the work for the Polish diaspora. In this activity, he was driven by the motto: “Wherever you are, give the tithe of your thoughts and efforts to the Nation, which brought you to this world”. 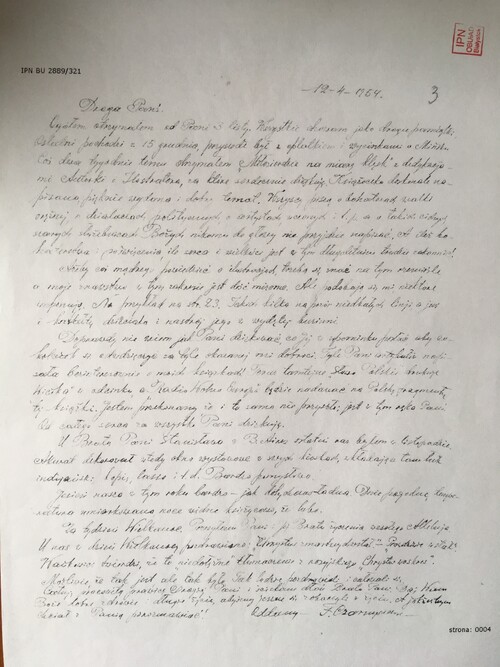 * NKVD’s “Polish operation” was a genocide of Poles in Russia, orchestrated by the Russian secret service commissioner Nikolay Yezhov, in which no less than 111 091 Polish citizens were shot in the backs of their heads and around 30 000 were sent to harsh labour camps.