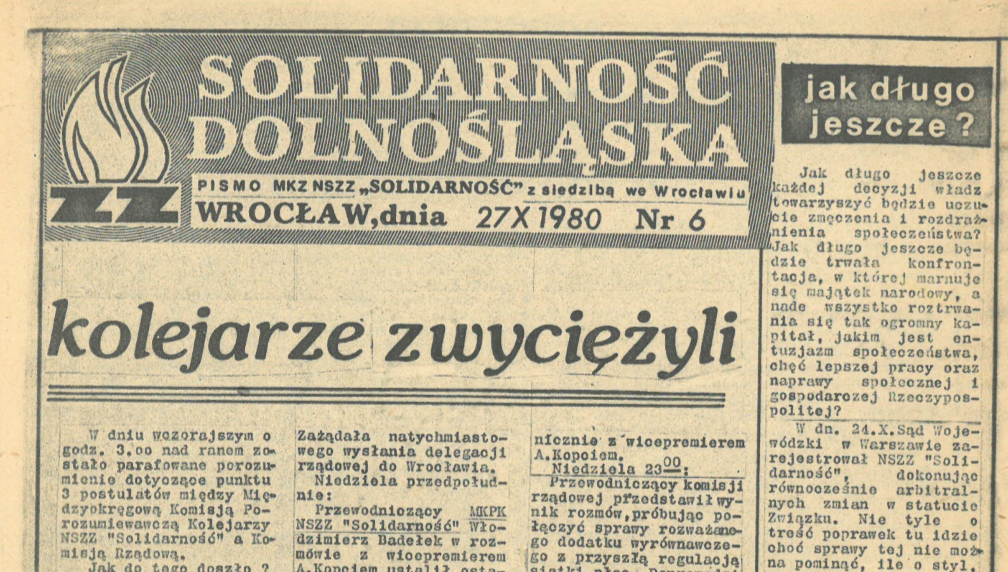 Author: Kamil Dworaczek 01.12.2019
In the autumn of 1980, in the common-room of the Locomotive depot in the city of Wrocław, 34 railroad workers from the “Solidarity” movement begun a hunger strike against the violent policies of the Communist officials. It was an important event not only for the employees of the Polish railroads, or PKP, but also for all members of “Solidarity” across the country.

A series of strikes erupted all over Poland in the summer of 1980, giving birth to the Independent Self-governing Labour Union “Solidarity”. In autumn, the union grew rapidly and included most of the labour unions in the country, PKP among them. Its employees sent a number of postulates to the Ministry of Transport and Communication, demanding the improvement of working conditions. Higher salaries were at the top of the list; the railroad workers wanted to implement a rule “the lower the salaries, the higher the raise”.

Negotiations, that took place at the locomotive depot in Wrocław, turned out to be ineffective. The “Solidarity” railroad delegates gathered there, decided to send their representatives to Lech Wałęsa, who was in the region of Upper Silesia at the time. Wałęsa met with them and heard their story, but didn’t offer any real support. On their way back to Wrocław, the disappointed railwaymen had to decide what to do next. It was then, that they came up with the idea of a hunger strike. They wrote the manifesto for it already in the car, stating that they will be protesting against the bad faith of the Communist government in the negotiations and against the dragging of procedures concerning the registration of the union. When the delegates returned to the railroad depot, they had the document ready. The idea of a hunger strike was approved almost unanimously. On October 21st 1980, 34 people begun the protest. The railroad workers knew, that they need to somehow put pressure on the corrupted government, yet they rejected the idea of an actual strike. They feared, that it could lead to the invasion of the Soviet Union, which wouldn’t want to lose control over important communication routes.

The railroad workers knew, that they need to somehow put pressure on the corrupted government, yet they rejected the idea of an actual strike. They feared, that it could lead to the invasion of the Soviet Union, which wouldn’t want to lose control over important communication routes.

For the first few hours and days of the protest, the railwaymen exchanged heated telegrams with the minister of transport and communication, Mieczysław Zajfryd and got to nowhere in the negotiations with the officials sent by the minister. The outrage of the railroad workers grew even larger, due to the picture of the strike presented by the public news program in television. The local media in Wrocław gave a slightly different coverage of the story, than the propaganda of the public TV. Due to that fact, crowds of residents of Wrocław gathered around the railroad depot to show their support for the employees of the PKP. On the city streets, railroad workers were greeted by the pedestrians, and even the tram motormen were stopping their vehicles in order to let the protesters pass in front of them, at ease.

Support for the starving protesters

Support came from all around Poland, the protesters were visited by “Solidarity” delegations from across the country. The railwaymen were visited by the union’s regional officials, e.g. by Jerzy Piórkowski, Władysław Frasyniuk and Krzysztof Turkowski, and also by Hubert Hanusiak and Antoni Lenkiewicz. The railroad workers who didn’t join in on the strike covered their train cars with “Solidarity’s” postulates. This led to some tensions with the GDR, which wasn’t eager to allow such trains to enter the city of Goerlitz. The Germans instructed the Polish motormen to remove such markings form the cars, which resulted in conflicts between the railwaymen and the border guards. 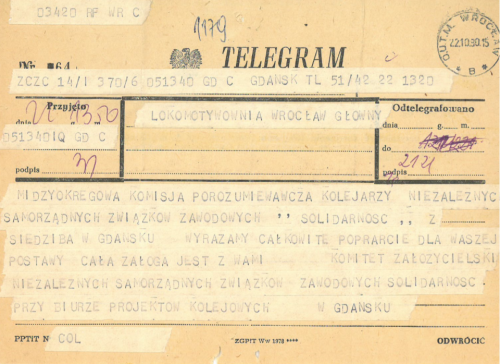 Telegram to the protesting railwaymen from the inter-tribunal consultative committee of independent self-governing trade unions “Solidarity” based in Gdańsk: “We express our utmost support for your initiative. The entire crew is with you.” 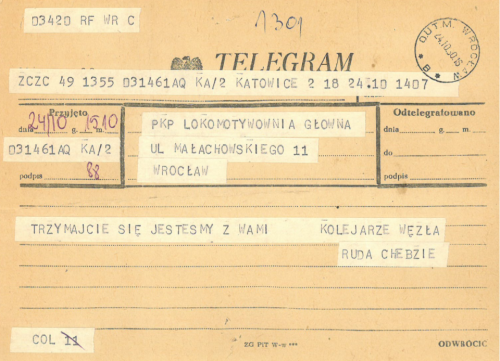 Telegram to the protesting railwaymen from the Ruda Chebzie railway station: “Hang in there, we’re with you.”

A holy mass, celebrated at the railroad depot on October 26th, led by priest Stanisław Orzechowski, was of great importance. It allowed for the citizens of Wrocław to experience unity like never before. Among the ones that were on the hunger strike there was good atmosphere. New friendships were being forged, there were long night talks. As the protesters often pointed out, the hunger was the worst for the first few days. After that, they gradually got used to it.

The Communists cave under pressure from the protest

After a few days of the hunger strike, there seemed to be no perspective for reaching any sort of agreement. The government officials didn’t show any will to back down and neither did the determined railwaymen. Tensions were running high. The stubbornness of the Communists came from the scale of the pay raises demanded by the protesters. Every zloty spent on them, would have to be multiplied by 300 thousand, since that was the number of PKP’s employees at the time. In the beginning, the government hoped, that the strike could be ended without spending additional money.

The hunger strike was, without question, the beginning of the “Solidarity” movement in the Polish railroad.

A breakthrough came after 5 days – on October 26th.  Deputy prime minister, Aleksander Kopeć agreed to renegotiate after talking with Jerzy Piórkowski and Włodzimierz Badełek, the president of the railroad “Solidarity”. It must have become apparent for the Communist party, that the issue needs to be resolved peacefully. The Wrocław depot was visited by the deputy minister of labour, payment and social issues, Janusz Obodowski who was much more eager to make a deal than the previous negotiators. Obodowski promised satisfactory raises, hence on October 27th, Badełek announced the end of the hunger strike.

The final agreement wasn’t set until October 31st. Someone managed to bring champagne, yet it was more difficult to organise proper glasses, so plastic cups were used instead. The celebrations, as it later turned out, were premature. The agreement was only the beginning of a very tough road. It was very difficult to enforce the terms of the deal and it required further pressure being put on the government.

The hunger strike was, without question, the beginning of the “Solidarity” movement in the Polish railroad. The events that took place in the Wrocław depot left a mark on not only the protesters themselves, but also on all the members of the union and a lot of the city’s residents. The many signs of support that came from all around Poland were the living proof, that solidarity with a small “s” was born as well. It wouldn’t be too much to argue, that the hunger strike built the feeling of unity between Wrocław’s citizens and was one of the sparks, that lit the fire of the “Solidarity” movement in the city. 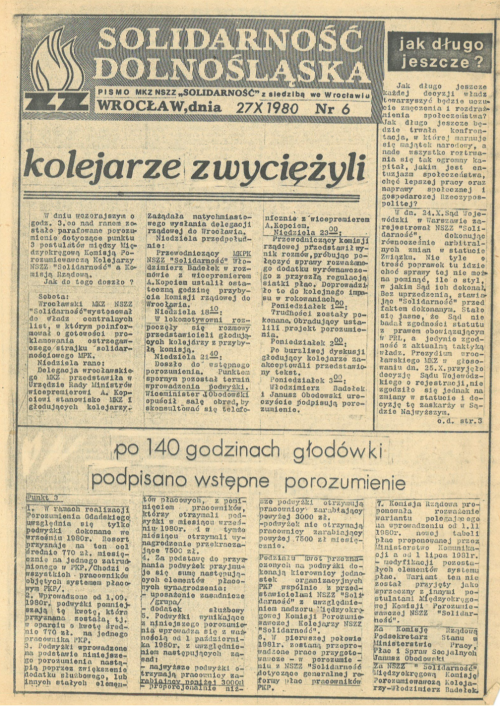