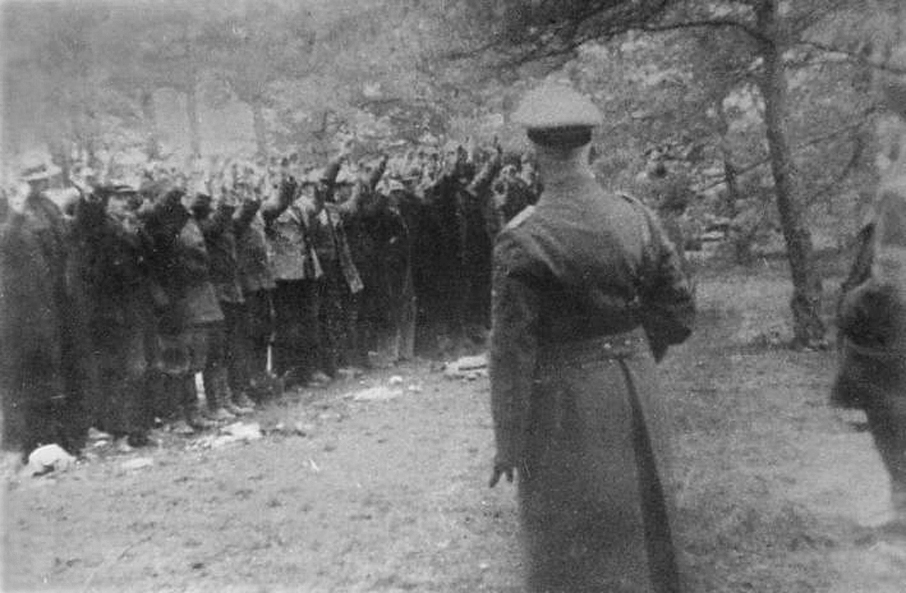 Author: TOMASZ SUDOŁ 19.05.2021
The German invasion of Poland was an extremely brutal campaign with war crimes being committed on a daily basis. Wehrmacht – the armed forces of Nazi Germany – on countless occasions violated international conventions and showed total contempt for its foe.

From the standpoint of the German propaganda, the invasion of Poland was a liberating war, aimed to rescue the German ethnic minority from the alleged oppression of the Polish state officials. Since the summer of 1939, the propaganda machine had been spreading fake news about “acts of cruelty” towards the Germans, supposedly committed by Poles. Its goal was to prepare the German society for the outbreak of the war. As a result, at the beginning of the conflict, the German soldiers were filled with anti-Polish stereotypes and aggression, which they took out on the captured POWs, as well as on the civilians.

War crimes committed on soldiers of the Polish Armed Forces

The German infantry committed many crimes on the Polish soldiers, due to the fact that the Polish side was perceived as a foe who violates the rules of combat by using dishonourable guerrilla tactics.

Often, this was enough of a reason for the Germans to not even bother with capturing the Polish soldiers, but to shoot them on site instead. There were many reports of Polish soldiers approaching the German infantry with their hands in the air and a piece of white clothing, showing their will to surrender, only to be shot immediately. There were also instances of Germans using Poles as living shields for the advancing Wehrmacht troops.

From the standpoint of the German propaganda, the invasion of Poland was a liberating war, aimed to rescue the German ethnic minority from the alleged oppression of the Polish state officials.

It’s also hard not to mention the countless examples of German soldiers finishing off the Polish wounded or stripping the fallen ones of their personal belongings, e.g.  wedding rings.

War crimes on POWs weren’t always committed on battlefields themselves, but during the marching of the prisoners to meeting points (e.g. the infamous crime in Zambrów) and POW camps as well.

The first few days in German captivity would often mean not having any food or water at all, which resulted in death or spreading of infectious diseases. However; it was the reality of POW camps that was the hardest to get through. Many of the camps were… built by the prisoners themselves, forced to construct their own prisons, spending a few weeks under the sky, like in Stalag I-A camp in Stablack, Eastern Prussia, where the captives even had to build the camp’s fences. 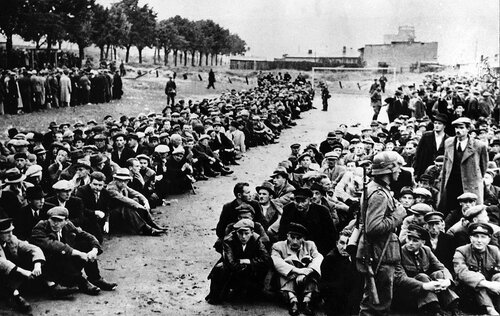 Citizens of Gdynia arrested by the Germans in the first days of the occupation. Between the 14th and the 30th of September 1939 there was a wide-scale “cleansing action” (German Sauberungsaktion) which resulted in 2500 thousand people getting arrested. Many of them were later murdered in Piaśnica or at the Stutthof concentration camp.

In several POW camps, the Germans conducted investigations, searching for Poles suspected of being involved in the so-called “Bydgoszcz bloody Sunday”. Such an investigation was conducted in a temporary meeting point for prisoners in Boryszew near Sochaczew, which led to 50 soldiers of the Polish Bydgoszcz National Defence Battalion being shot by the Germans on September 22nd, 1939.

Almost every day of the September campaign, there were instances of Wehrmacht soldiers murdering Poles in small towns and villages, as they suspected them of aiding the Polish army. What’s more, the civilians were also accused of killing local Germans. In this case, the German officers worked in strict co-operation with the German police (with commanders of  Einsatzgruppen), e.g. in Bydgoszcz in October, 1939. In many places, the German military and law enforcement created makeshift investigative commissions, which looked into cases of both alleged and factual Polish war crimes.

Dozens of thousands of civilian men, between the ages of 18-45, were taken into captivity by the Wehrmacht and put into temporary gathering points or POW camps. As early as in October of 1939, some of them were sent to work in the agricultural sector, becoming the first non-Germans forced to do labour for the Third Reich. Many were accused of being the “Polish guerrilla fighters” or “partisans”, and were then transported to concentration camps, such as the Buchenwald or Mauthausen camps. 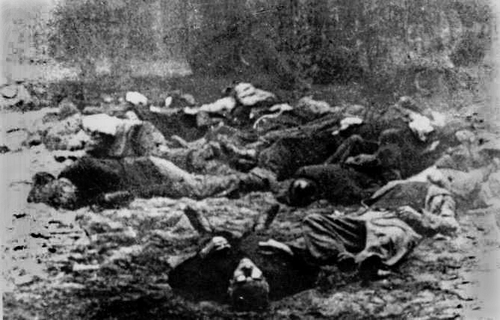 Bodies of Poles murdered by the Germans in Piaśnica. The picture was taken by Waldemar Engler – a volksdeutsch (a Pole of German origin collaborating with the Nazi Germans during WWII; translator’s annotation) from Wejcherowo who was a member of the SS (he worked as a photographer before the war). The photo prints were stolen from him by his Polish employees.

Pacification of the cities

A testament to how easily the Germans would turn to violence could be the events that took place in the city of Częstochowa, a day after it was captured by the Wehrmacht. On the 4th of September, there were a few minor incidents on the city streets -- chaotic shootings caused by small, leftover groups of Polish soldiers, and also by the Germans, who treated every shot fired as a confirmation of the presence of the Polish partisans.

Often, this was enough of a reason for the Germans to not even bother with capturing the Polish soldiers, but to shoot them on site instead. There were many reports of Polish soldiers approaching the German infantry […] showing their will to surrender, only to be shot immediately…

As a result, the city was brutally dealt with. Men were taken from their homes and forced to lay down on the city streets and squares. Some of them were held as prisoners, but in many parts of Częstochowa the civilians were shot on site. In total, more than 200 Polish citizens were murdered.

Another example, could be the city of Katowice, where upon taking the city, the Wehrmacht soldiers shot everyone suspected of being a Polish freedom fighter. Members of the so-called Freikorps also shot Poles who took part in the city’s defence. Among the killed, were members of the Voluntary Insurgent Units, scouts and probably a small number of Polish army soldiers. Wehrmacht troops took part in the murders as well, but they mainly escorted the arrested Poles and kept everything in order. 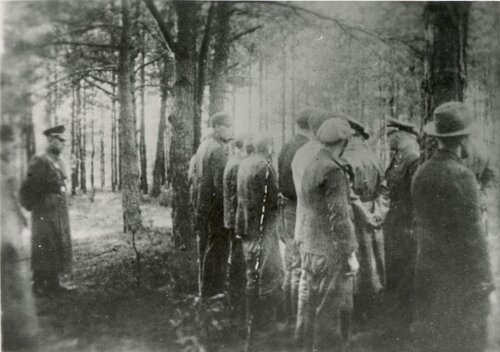 Piaśnica. Taking away the victims’ papers before the execution.

Many war crimes were based on deep anti-Semitism, which was a popular view among the ranks of the German army. Apart from murdering Jews and burning down their synagogues, the Germans forced them to cut their distinctive beards and side locks; to do humiliating work like cleaning the city streets on their knees and to pose in embarrassing positions (e.g. with their hands in the air), which the Germans were eager to capture on cameras. The Nazi propaganda accused the Jews, without any grounds to go on, of causing the war, which resulted in the inhuman way the German soldiers treated them.

How brutal was the 1939 campaign, show the memories of a famous German film director, which was well-known for making movies glorifying the Nazi ideology, Leni Riefenstahl. She and her film crew came to Poland to shoot footage of the fighting, because as she wrote herself, she “wanted to be useful during the war”. In the town of Końskie, on September 12th, 1939 she witnessed a chaotic shootout, by the end of which the German soldiers murdered 22 Jews. This incident left such a huge mark on her, that as she wrote in her memoirs “[…] I asked the general, if he’d allow me to give up my work on the film chronicle […].”