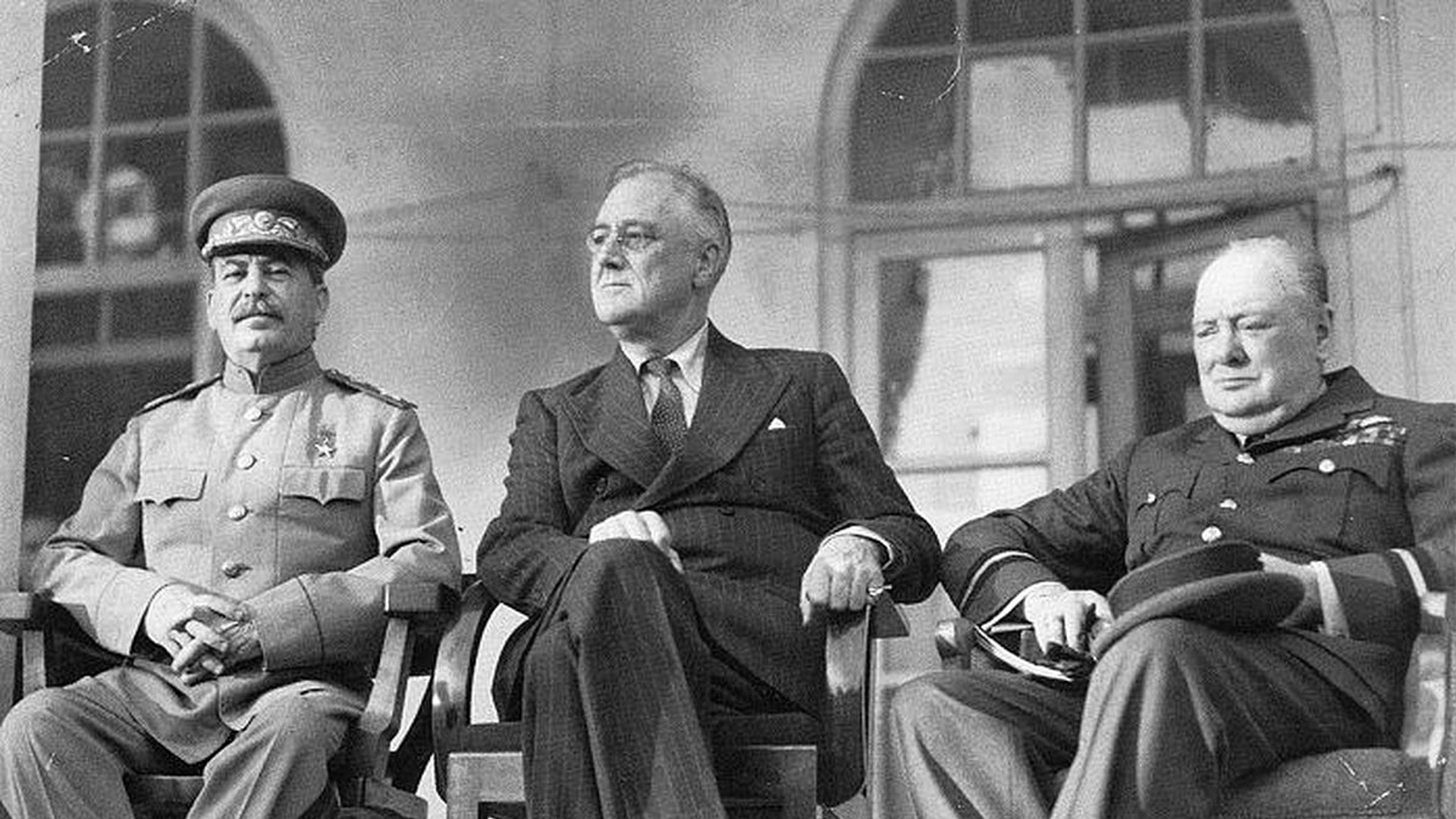 Stalin’s victory in Tehran. Poland’s fate on the conscience of Roosevelt and Churchill

Author: Marcin Chorązki 23.06.2022
Between November 28 and December 1, 1943, Joseph Stalin, Winston Churchill and Franklin Delano Roosevelt debated in Tehran. It was a crucial moment of the Second World War. The most important decisions regarding the final stage of the war and the postwar fate of Europe, including Poland, were made there.

The year 1943 was a breaking point for the course of the Second World War. The antifascist coalition was winning on all fronts. Following its victory in the biggest armoured battle on the Eastern front, near Kursk, the Soviet army quickly advanced west. The English troops landed in Italy, which officially surrendered. The Americans, using the tactic of “frog leaps” in the Pacific, liberated the Solomon and Gilbert islands from the Japanese occupation.

The scales of victory were tilting towards the Allies and the time to establish a new world order after the war was coming. The Great Three was deciding on the shape and division of zones of influence: Stalin, Churchill and Roosevelt. In the years 1943-1945 they met twice like this (for the third time, following his death, Roosevelt was replaced by the new US president, Harry Truman). Their decisions not only sealed the fate of the lost parties, but also other, weaker allies, such as Poland. 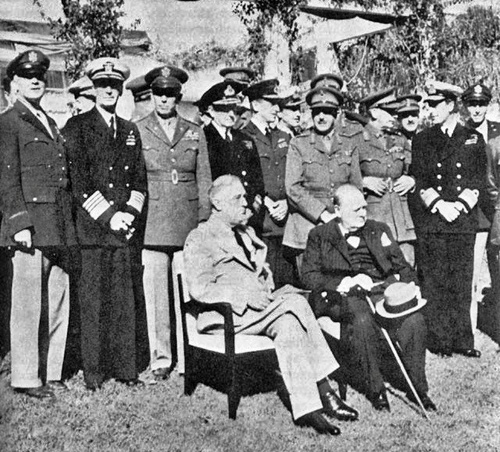 Franklin Roosevelt and Winston Churchill during the conference in Casablanca, January, 1943 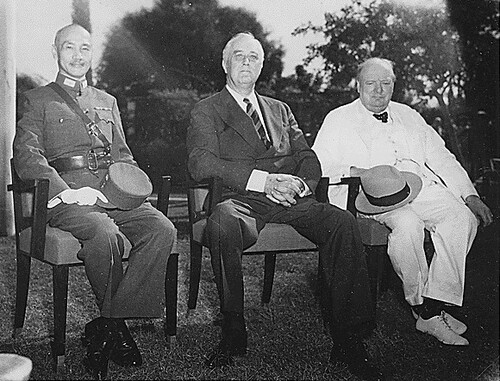 Chang Kai-shek, Franklin Roosevelt and Winston Churchill during the conference in Kair, November 25, 1943

The time and place of the conference was chosen by Stalin. He wanted the location of the discussions to be as favourable to the Soviet side as possible, and inconvenient and unpleasant for the British and Americans due to the time and distance required to make the journey. The site of the conference was under constant surveillance and invigilation of the Soviet services, and the Soviet army stationing in Iran (along with the British army since August, 1941) was responsible for the security. The date of the meeting between the leaders of the world powers was chosen due to the decrease in intensity of the war efforts, partially due to the winter conditions.

The scales of victory were tilting towards the Allies and the time to establish a new world order after the war was coming. The Great Three was deciding on the shape and division of zones of influence: Stalin, Churchill and Roosevelt. Their decisions not only sealed the fate of the lost parties, but also other, weaker allies, such as Poland.

Stalin skillfully negotiated with the Allied leaders, striving to achieve his goals set in advance. His main intention was to establish an approximated date of the invasion in western Europe and only in this part of the continent. There were two reasons behind this. First of all, the Soviet leader wanted to relieve parts of his army fighting in eastern Europe. Secondly, he wanted to draw the Allies away from Central and Eastern Europe - the areas of planned, Soviet, political domination.

Stalin lived by the rule that the real USSR’s zone of influence was where Soviet soldiers set foot. He did not want to open up a second front at the so-called Europe’s soft underbelly, meaning the Balkans, perceived by Churchill as a crucial British point of influence in Central Europe. Importantly, the US president did not share the opinion of UK’s prime minister, as he wanted to quickly end the war in Europe and transfer the coalition’s efforts to the Far East. Roosevelt wrote to his son after the conference, commenting Churchill’s efforts:

“Whenever England’s prime minister tried to prove the necessity of striking the Balkans, it was very clear for everyone in the room, what he actually meant by that. He wanted to first and foremost plunge a knife into central Europe, to not let the Red Army in […] Stalin understood that, I understood that, everyone understood that […] The problem is, that the British prime minister is thinking about the postwar years and what will happen to England. He is terrified that we will allow Russia to grow in strength too much.”

Stalin, knowing his partners’ intentions, skillfully formented disputes between Churchill and Roosevelt. While seriously negotiating, he often discretely mocked the British prime minister, at the same time constantly praising the American president. He gained so much sympathy with Roosevelt that in private conversations after the conference the American leader called him “uncle Joe”. 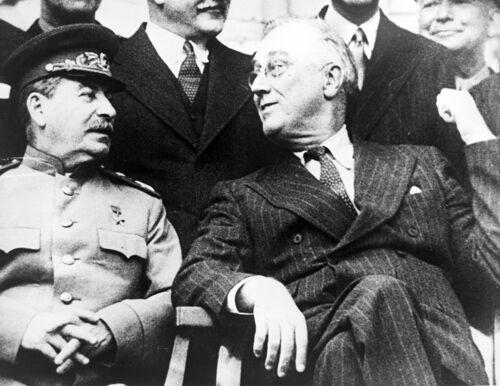 The Soviet dictator got Roosevelt’s support on matters crucial for his policies like the place of landing of Allied forces and the division of zones of influence in Europe after the war. It was also the result of the American president’s lack of interest in the situation of Central and Eastern Europe. Roosevelt did not see any political interest for his state in this part of the Old Continent.

The Tehran discussions led in consequence to the opening of a second front in France, in June, 1944, which was in accordance with Stalin’s plans. He was given total freedom in choosing military and political actions in eastern parts of Europe. Several dozen nations were left to the mercy of the Soviet Union, including the biggest in this part of the continent - the Czechs, Hungarians, Bulgarians and Poles.

Poland’s situation was special due to the fact that there was an unresolved conflict between the Polish government-in-exile and the Soviet side, namely the aggression on September 17, 1939. There were the unsettled problems with the borders and the discovery in spring 1943 of the mass graves of Polish officers in Katyń, murdered by the NKVD in the year 1940. All these difficult matters were left on the sidelines of the negotiations between global powers in November 1943. It was established that the Polish borders would be “corrected” - in the east somewhere along the Curzon line, and in the west, at the expense of Germany, along the Oder river. The shape of the future Polish state was left unspecified in Tehran, similarly to its system or political landscape. 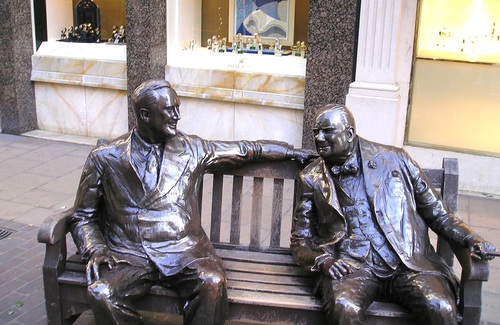 Moreover, Stalin openly declared his unwillingness to reach a compromise with the government in London, believing it to be compromised by the alleged cooperation with the Germans while investigating the circumstances of the death of Polish officers whose graves were found in Katyń. Despite Churchill’s requests and suggestions Stalin rejected the possibility of reaching an agreement, and his stubbornness only grew with every attempt of the British prime minister to the growing boredom of the US president.

In the end, the global leaders declared compensation for Poland at the expense of the Third Reich and a vague guarantee of democratic rules in the reborn Poland. Such promises were to calm the emotions of Polish political groups in emigration and the consciences of English leaders.