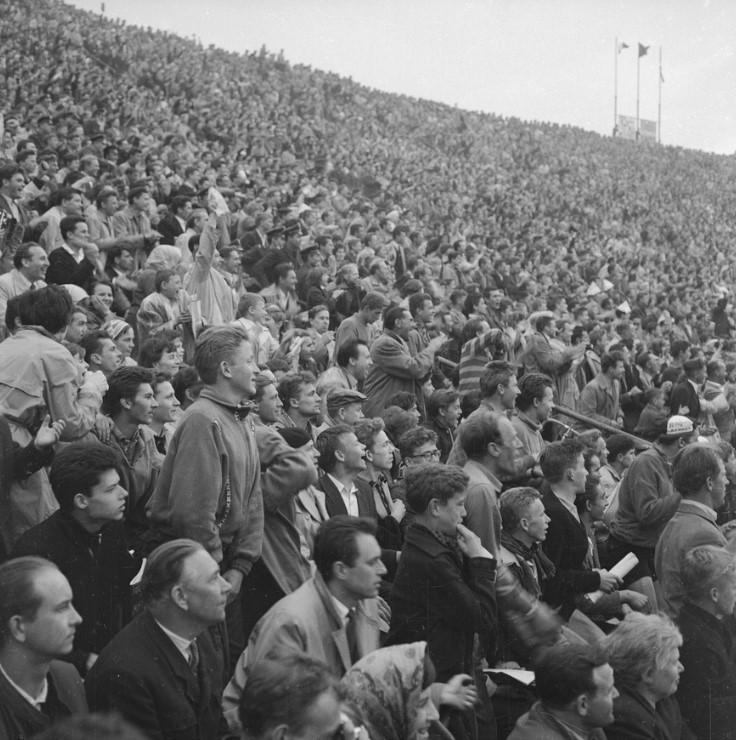 Author: PAWEŁ SASANKA 21.04.2020
When did the most violent clashes with the Citizens’ Militia took place in Warsaw before 1989? Was it in October 1957, after the liquidation of the “Po prostu” weekly, in March 1968, June 1976 or during the street protests during martial law?

None of these answers are correct. The correct answer is: on May 24th 1968, at the 10th-Anniversary Stadium, during the finishing of the 16th stage of the XXI Peace Race. Even though, more than a hundred people got hurt in the fights which lasted almost 20 hours, these events remain a practically unknown episode of the Polish People’s Republic history, until recently barely even mentioned.

The XXI Peace Race was taking place only two months after March 1968 – one of the most violent social-political crises during the Communist-era. Street protests took place in several dozen Polish cities – not only at academic facilities. After they were pacified, in the entire country, especially in Warsaw, there was a tense, stuffy, post-March atmosphere.

In the meantime, the course of the cycling competition helped heat the emotions. After the first stage, the Polish team was in the lead in the general classification, Zygmunt Hanusik won and Zenon Czechowski was the most active cyclist. However, Poles quickly lost their lead and the team from East Germany went up front gaining a 90 seconds advantage. The rest of the XXI Peace Race consisted of the Polish team trying to catch up with the East Germany team. In this regard, the second to last, 15th stage of the race from Puławy to Radom turned out to be crucial. During the individual race Poles firmly attacked and took the lead back. Before the last stage, from Radom to Warsaw, the position of Polish as the leader of the general classification seemed unthreatened. It was similar in the individual classification where there were no surprises expected: the East Germany cyclist, Axel Peschel had a comfortable advantage.

Even though, more than a hundred people got hurt in the fights which lasted almost 20 hours, these events remain a practically unknown episode of the Polish People’s Republic history, until recently barely even mentioned.

VIP lounge and the public

In the VIP lounge, in front of which the cyclists were to end the competition, sat many high-ranking party and state officials. Among them were – sitting in the order of their state-party hierarchy – Józef Cyrankiewicz, Stefan Jędrychowski, Zenon Kliszko, Ignacy Loga-Sowiński, Eugeniusz Szyr, Józef Ozga-Michalski, Artur Starewicz, Józef Tejchma, Józef Kępa.

The course of the final stage of the race brewed up the emotions among the nearly 100 thousand people gathered at the 10th-Anniversary Stadium which was located where today is the National Stadium. The fans impatiently listened to the information from the speaker on the course of the race. As Bohdan Rymaszewski – one of the spectators – recalled, huge tension was felt at the stadium, a distinct dislike towards the Citizens’ Militia and whistles and boos were heard whenever the Soviet Union or its cyclists were mentioned.

In the VIP lounge, in front of which the cyclists were to end the competition, sat many high-ranking party and state officials. Among them were – sitting in the order of their state-party hierarchy – Józef Cyrankiewicz, Stefan Jędrychowski, Zenon Kliszko, Ignacy Loga-Sowiński, Eugeniusz Szyr, Józef Ozga-Michalski, Artur Starewicz, Józef Tejchma, Józef Kępa.

Meanwhile, the first points in Grójec went to the representative of the USSR, Saidhuzhin before Zygmunt Hanusik. Zenon Czachowski came out on top in the fight against another Soviet cyclist for more bonus points. Eighteen kilometres before the finish line, a group of cyclists consisting of Polish Andrzej Bławdzin, East Germany’s Ampler, Italian Santambrogio and Belgian Mintjens separated from the peloton. Those four competed for victory. In the end, Ampler won and Bławdzin finished fourth. A fifth place was also taken by the representative of Poland, Zenon Czechowski. This way, Poles easily won the team competition of the XXI Peace Race.

The tension among the spectators, caused by the incoming information about the leading Soviet cyclists did not die out, even though it was the representative of East Germany who first crossed the finish line. During the ceremony of awarding medals, several dozen people started jumping over the fences and ran towards the Polish sportsmen to congratulate them. The security services weren’t capable of stopping them. According to Bohdan Rymaszewski, the officers of the Militia treated the spectators more and more brutally, until one of the fans was hit. There were many people whistling in the stands. It is also possible, that it all started with a fight between a drunk fan and a Militia officer which was joined by more and more people. 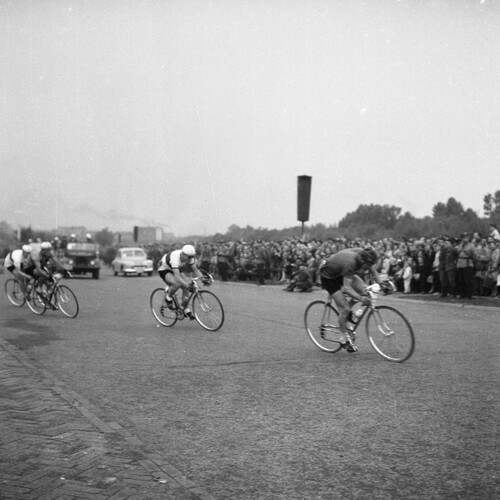 Peace Race: cyclists before entering the field of the 10th-Anniversary Stadium (Warsaw); 1961, from the collections of the National Digital Archives (Photography Archives of Zbyszek Siemaszko)

At the Militia with anything at hand

Bottles, stones, practically anything that was at hand was thrown at the Militia blocking the entrance to the stadium field. Since the stones were also falling on the people sitting below, chaos broke out at the stands: some fans tried to run away and leave the stadium, some joined the fight.

“What we saw looked horrible. At least several dozen people were taking part in the fight that was just breaking out” - recalled a witness after some years.

Although Prime Minister Józef Cyrankiewicz, present at the VIP lounge, called for the hardened Motorised Reserves of the Citizens’ Militia or ZOMO, they proved to be too ineffective at quickly dispersing the riots. It is worth noting that many officers of the ZOMO were on vacation at the time: they were resting after the difficult and straining March.

Objects were thrown at the stadium field, such as “bottles, stones and other hard objects causing more chaos”. Around 7 p.m. “some of the aggressive spectators (around 3000 people) gathered in front of the building of the State Enterprise of Sport Events, threatening the public order”.

A document was recovered by the Archives of the Institute of National Remembrance which more or less summed up the several hours of fighting in the streets of Warsaw. From the perspective of the Security Service, the riots were caused “by hooligan elements, excited by the victory of the Polish team”. Objects were thrown at the stadium field, such as “bottles, stones and other hard objects causing more chaos”. Around 7 p.m. “some of the aggressive spectators (around 3000 people) gathered in front of the building of the State Enterprise of Sport Events, threatening the public order”. Meanwhile, an hour later – according to the information found in the document – the ZOMO troops brought the situation under control by using force.

In the face of this last information, surprising is the scale of the brutality of the fights. 31 people were hurt, out of which three ended up in a hospital. 14 officers of the Militia got wounded. 14 vehicles of the Militia were damaged with windows broken, car paint scratched and car bodies bent. In the aforementioned document it was also noted that

Very similar phrasing was used to describe these events in the press which clearly points to the source of these publications. In the articles, there were mentions of hooligans disturbing the atmosphere of a grand sports event and of groups of violent teenagers invading the pitch, throwing bottles and rocks and starting riots at the nearby railway station. 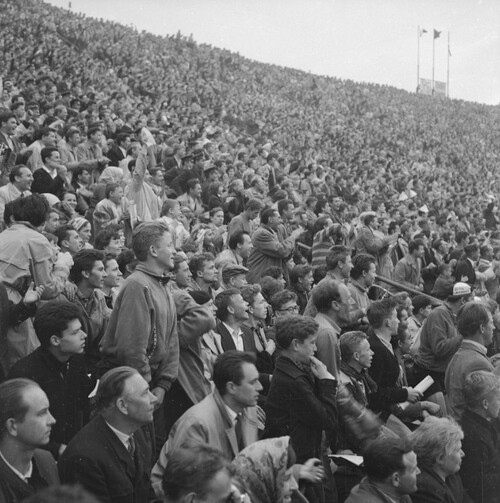 Peace Race: spectators at the 10th-Anniversary Stadium (Warsaw); 1961, from the collections of the National Digital Archives (Photography Archives of Zbyszek Siemaszko)

To bring ease to the readers, “Życie Warszawy” finished its article with:

“The efficient actions taken by the security services brought an end to the hooliganism. These riots were met with common indignation and condemnation from the spectators gathered at the stadium”.

This is how the dramatic finale of the XXI Peace Race was officially summarised.

Four months later – on September 8th - the 10th-Anniversary Stadium witnessed a much graver event. During the Harvest Festival, as a protest against the Polish Army participating in the invasion of Czechoslovakia, a former Home Army soldier from Przemyśl Ryszard Siwiec set himself on fire and died five days later due to his wounds.