Historical era
(1939-1945) II wojna światowa
Author: Łukasz Gramza 24.01.2020
In December 1939, the Government of the Republic of Poland in exile in a special resolution announced the use of retaliation for innocent Polish victims against the Germans, and especially towards managerial spheres.

The Polish Underground State actively participated in documenting the crimes committed by the occupiers. Resistance reports were sent to the Polish government-in-exile and to the authorities of the Western Allies. Thanks to them, the names of the greatest criminals responsible, among others, for the genocide committed in extermination camps even before the end of the war were on arrest warrants published by the United Nations War Crimes Commission.

Decree of the Polish Committee of the National Liberation of August 31, 1944 and actions based on it

In August 1944, a decree was issued by the Polish Committee of National Liberation on the Polish territories occupied by the Red Army on "punishment for fascist-Nazi criminals guilty of murder and ill-treatment of civilians and prisoners of war, and for traitors of the Polish Nation" (commonly referred to as the "August Decree"). Article 1 point 1 of the decree - in force to this day - provides that who gave the voice to the authorities of the German state or allied with them, and took part in the murder of persons from among civilians or military persons or prisoners of war, shall be punished by death (presently - life imprisonment).

Investigations regarding the crimes committed in the KL Auschwitz-Birkenau camp were first undertaken by the Prosecutor's Office of the First Ukrainian Front in February 1945. However, their results were not fully available to the Polish party and Soviet officers took away a large number of documents found in the liberated camp. In April 1945, the Commission for the Investigation of German-Nazi Crimes in Oświęcim began its activity. From November 1945, it was active in the structures of the Main Commission for the Investigation of German Crimes in Poland. The commission secured evidence that had not previously been seized by the Soviet law enforcement authorities, conducted interrogations and medical examinations of former prisoners as well as an inspection of the camp area. The Polish authorities requested the extradition of the captured and identified SS men. More than 700 former camp staff members were brought before Polish courts. The perpetrators of the most serious crimes were trialed by a court specially appointed for this purpose - the Supreme National Court. In April 1947, the former KL Auschwitz commandant Rudolf Höss was sentenced to death. In December 1947, prisoners of the camp crew were sentenced in a Krakow trial. Among the 40 defendants, former camp commandant Arthur Liebehenschel was tried. In addition to him, 22 other accused were sentenced to death. Further trials against former members of the Auschwitz-Birkenau KL crew were conducted before regional courts, but the prosecution of criminals became increasingly difficult. This resulted, among others, from the growing distrust in relations between communist Poland and the authorities of the Allied states, which were less and less willing to consider extradition requests. For this reason, lawsuits regarding crimes committed by members of the KL Auschwitz-Birkenau crew ended in Poland in the first half of the 1950s. After 1956, a significant number of tried Nazi criminals were released. Another blow to the effective prosecution of perpetrators was brought by the Amnesty Act adopted in 1956, which stated, among others, that proceedings were not instituted, and that proceedings initiated were also discontinued in cases related to the acts of the "August Decree". It is true that the provision of Art. 1 point 1 was excluded, but this also meant that crimes were subject to abolition, e.g. participation in a German criminal organization (e.g. service in the SS), or surrendering persons to German authorities (e.g. the so-called shmaltsovnik). At the same time, the work of the Commission for the Investigation of Nazi Crimes ceased. 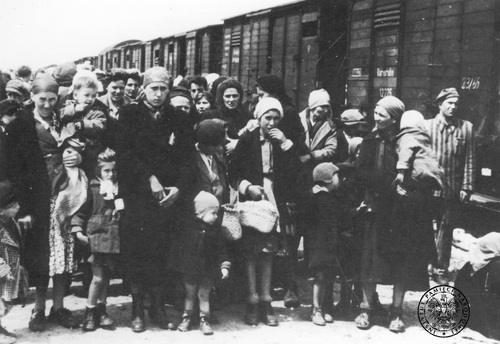 Women and children upon arriving at the KL Auschwitz-Birkenau camp, May 1944 Photo: AIPN

Suspension of the time-barred period

The Act of 1964 suspended the limitation period in cases of murders committed by officers of the German Third Reich or persons cooperating with the German authorities. However, Polish criminal law still deviated from international standards in the field of prosecution of war crimes. The new Criminal Code of 1969 did not contain any provisions on criminal liability for war crimes, crimes against peace and crimes against humanity. Such a far-from-perfect situation lasted until the fall of the Polish People's Republic.

The new Criminal Code of 1969 did not contain any provisions on criminal liability for war crimes, crimes against peace and crimes against humanity. Such a far-from-perfect situation lasted until the fall of the Polish People's Republic.

Further proceedings regarding the broadly understood activity of the Auschwitz-Birkenau extermination camp were initiated in the second half of the 1960s. Three investigations concerned the crimes committed during the camp's operation, the killings of prisoners evacuated from the camp on the routes called Death Marches and medical and pseudo-medical experiments conducted on the prisoners in the camp. None of these proceedings was concluded with the issuance of a substantive decision. In the second half of the 1970s and in the 1980s, investigations were terminated by orders to suspend proceedings. In the justifications of the suspension orders it was concluded that access to the archives located in Germany is difficult and the prospect of bringing the perpetrators to a Polish court was distant. In the 1980s, the prosecution of crimes committed in KL Auschwitz practically froze again. 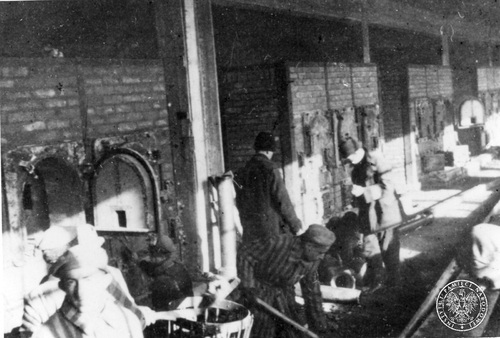 In the years 2010-2011 the Branch Commission for the Prosecution of Crimes against the Polish Nation in Krakow started the suspended proceedings anew. They are currently conducted under file reference number S 78.2011.Zn. One investigation covering all the issues related to the functioning of the Auschwitz-Birkenau camp. The assumption is to achieve several complementary goals. The basic (trial) objectives include making actual findings in the field of:

– data of people imprisoned in the camp;

– the circumstances of taking the life of prisoners in the camp;

– unlawful acts of an individual nature committed to the detriment of prisoners of the camp;

– medical and paramedical experiments carried out on prisoners of the camp;

–liquidation of the camp and crimes committed in connection with its evacuation;

–officers of the German Third Reich serving in the camp;

The findings of the investigation will enable - in cooperation with the other substantive divisions of the Institute of National Remembrance - other goals to be achieved, including, in particular, archival, scientific and educational purposes.

None of these proceedings was concluded with the issuance of a substantive decision. In the second half of the 1970s and in the 1980s, investigations were terminated by orders to suspend proceedings. In the justifications of the suspension orders it was concluded that access to the archives located in Germany is difficult and the prospect of bringing the perpetrators to a Polish court was distant.

In the course of the investigation, cooperation was established with domestic and foreign institutions involved in documenting and prosecuting Nazi crimes. As part of international legal assistance, activities were carried out to secure documents for the purposes of preparatory proceedings against former camp staff members. Some of the proceedings resulted in indictments being filed with the courts.

At present, the files of the investigation include more than 3,000 reports of hearings of witnesses. They also include reports on the inspection of the camp area and the Death March route, opinions of experts, including foreign experts, reports, notes, press articles, photographs, copies of judgments and decisions, copies of camp documentation and others. Several new threads have been revealed that are subject to verification. 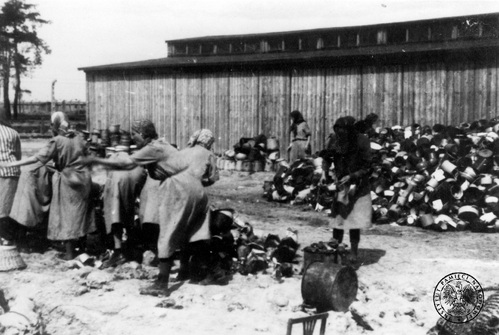 Group of prisoners sorts personal belongings of prisoners from a transport to KL Auschwitz-Birkenau, May 1944 Photo: AIPN

The activities related to obtaining documents, including archival documents from external entities, require continuation. While in the case of Polish branches the activities have basically been completed, they require considerable effort and resources in relation to foreign entities. Acquiring documents from such sources requires conducting queries in foreign archival facilities.

Activities are ongoing to determine whether persons identified as former camp officers are still alive. In this case, a possibility to prosecute them exists. Regardless of this, based on the evidence gathered in the course of the investigation, a substantive decision will be issued definitively terminating the criminal proceedings in this case.

Headlines come from the Next Stop History Editorial Office