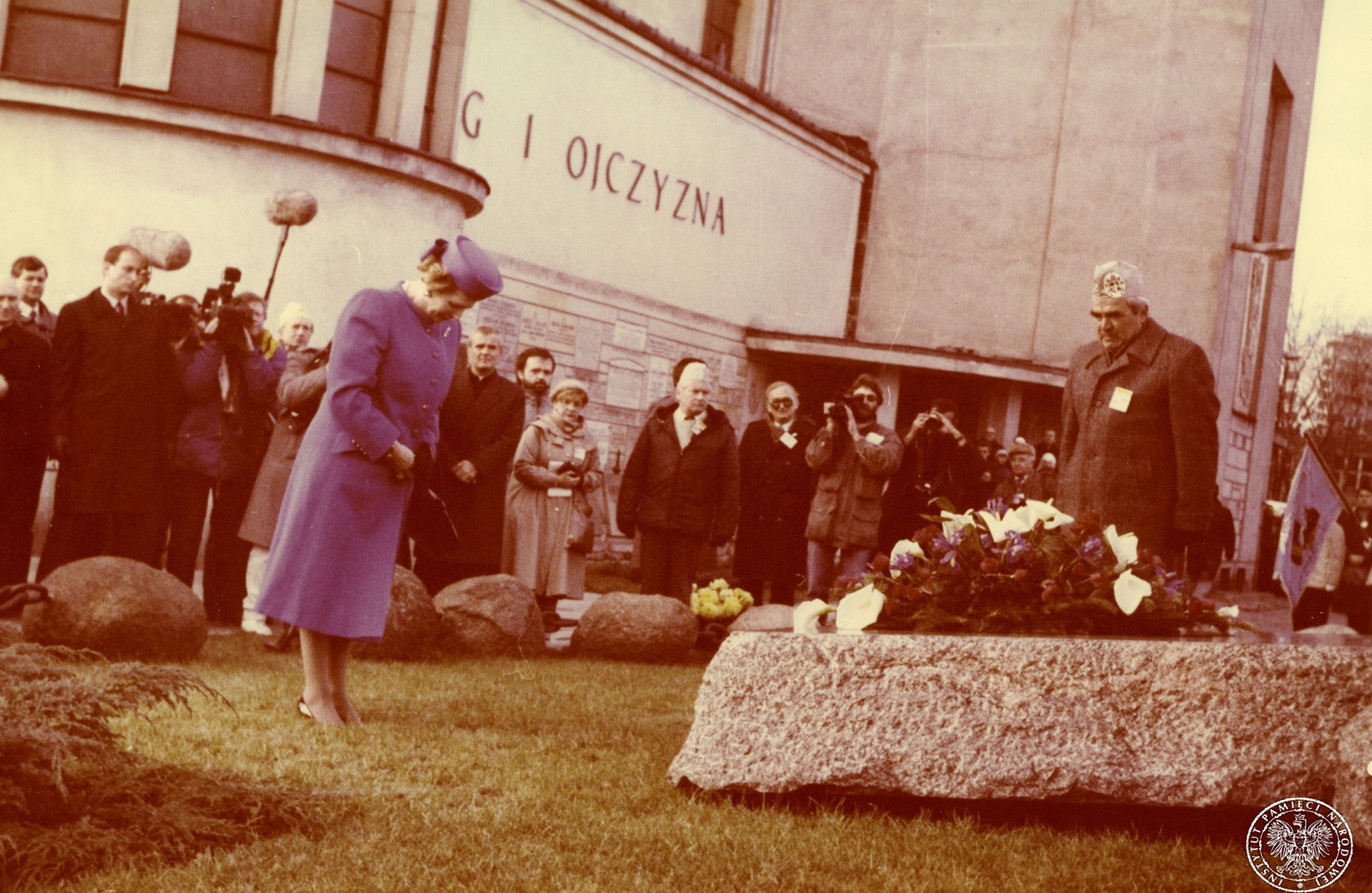 Author: RADOSŁAW MORAWSKI 09.01.2023
Margaret Thatcher, dubbed the “Iron Lady” due to her firm policies, visited Poland between November 2-4, 1988, during the special time of preparations for the Round Table talks. The visit did not bring the results expected by the communist authorities of the Polish People’s Republic, but instead gave hope to the Polish opposition of gaining the West’s support.

“A vile woman… I thought the Anglicans hated these papists, and she opens her speech with Popiełuszko.”

General Wojciech Jaruzelski was to use these words to address members of the Central Committee of the Polish United Workers’ Party. This was his reaction to Margaret Thatcher laying flowers at the grave of the priest murdered by the Security Service in 1984. It was the first ever visit of the prime minister of the United Kingdom to Poland. 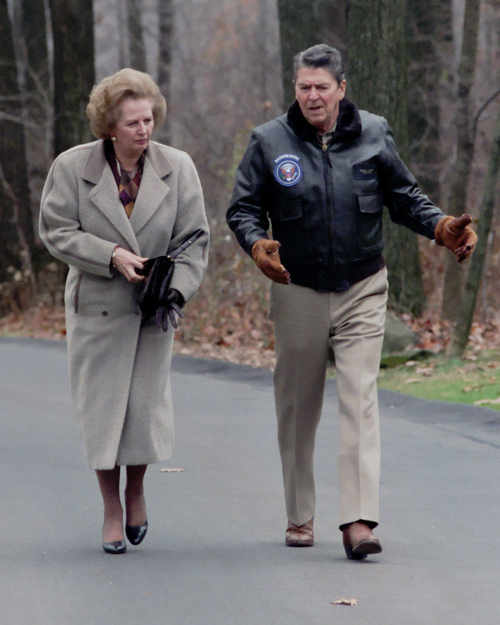 The British prime minister hoped to establish better relations with the leader of the USSR, Mikhail Gorbachev through general Jaruzelski.

Margaret Thatcher, commonly referred to as the “Iron Lady” due to her unyielding policies, visited Poland between November 2-4, 1988, during the special time of preparations for the Round Table talks. Two cities ended up in the program of the visit: Warsaw and Gdańsk. Authorities of the Polish People’s Republic expected a lot from her visit, but first and foremost they wanted support for their own reforms.

The British prime minister, on the other hand, hoped to establish better relations with the leader of the USSR, Mikhail Gorbachev through general Jaruzelski. She also wanted to show support for the Solidarity opposition. She paid good attention to details. When she heard that the colour green is associated with hope in Poland, she decided to wear a jacket in this colour during her meetings with the opposition.

Concessions of the desperate communists

The operation of securing the visit of the UK prime minister in Poland was nicknamed “Albion”. The Security Service used substantial funds to monitor and limit Thatcher’s contacts with the opposition. 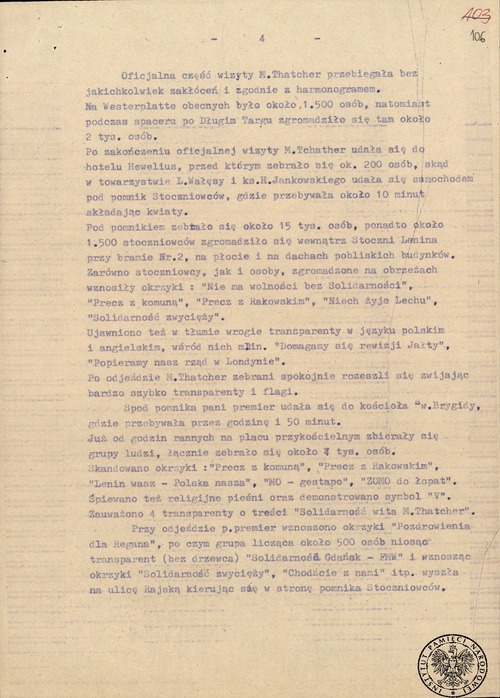 Fragment of the Citizens’ Militia survey from operation “Albion” regarding the course of Margaret Thatcher’s visit to Gdańsk, November 4, 1988 (the Institute of National Remembrance, Gd 564/194)

To make a good impression, the Polish People’s Republic authorities agreed to a series of concessions in the official program of the visit. Apart from agreeing for her to visit the grave of priest Popiełuszko, Margaret Thatcher was also allowed to meet with the ordinary residents at the shopping centre, the Mirowska Hall in Warsaw, and to meet with the Solidarity activists (including Lech Wałęsa) at the St. Bridget’s Church in Gdańsk.

Prime minister Thatcher’s visit to Poland did not bring the results expected by the authorities of the Polish People’s Republic. The government of the United Kingdom did not support Poland in the Paris Club regarding its foreign debts.

Official talks with the government, including meetings with prime minister Mieczysław Rakowski and general Wojciech Jaruzelski serving as the President of the State Council, completed the visit’s program.

Margaret Thatcher also visited the Royal Castle in Warsaw, laid flowers at the Tomb of the Unknown Soldier and met with the Primate of Poland, cardinal Józef Glemp.

Cracks in the illusion

During her drive through the streets of Warsaw, on November 2, 1988, at the corner of Krucza and Aleje Jerozolimskie, resistance groups “In Solidarity” dropped hundreds of leaflets saying “the Red poison us” and “the leading role of the Party in destroying the economy”. They also hanged a banner on a building with a picture of a spider and a slogan saying:

“Margaret, beware of the red spider!”

The banner was hanging there for around 40 minutes. 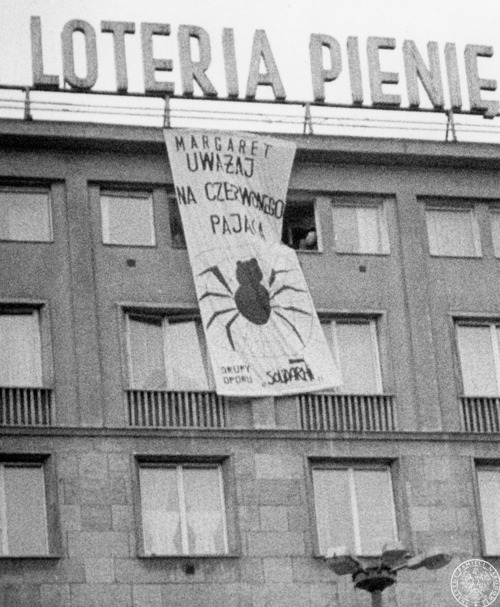 Banner hanged from the building at the corner of Aleje Jerozolimskie and Krucza Streets in Warsaw, November 2, 1988

On November 4, 1988, during her visit to Gdańsk, she laid flowers with general Jaruzelski at the Westerplatte monument, and then she took a tourist cruise to the Gdańsk Shipyard. Here, she was welcomed by crowds of shipyard workers holding banners, not only with Solidarity slogans, but also sentences in English, like these:

“We demand a revision of the Yalta pact.”

Then, accompanied by Lech Wałęsa, she laid flowers in front of the monument for Fallen Shipyard Workers of 1970. She then headed to the St. Bridget Church, where she ate dinner with members of the delegalised Solidarity Movement at the presbytery. There, she promised her support in legalising the union.

To end her visit, she met with a crowd of Poles who sang “Boże, coś Polskę” [God Save Poland]. Upon returning to Warsaw and the last meeting with general Jaruzelski, she flew back to London. 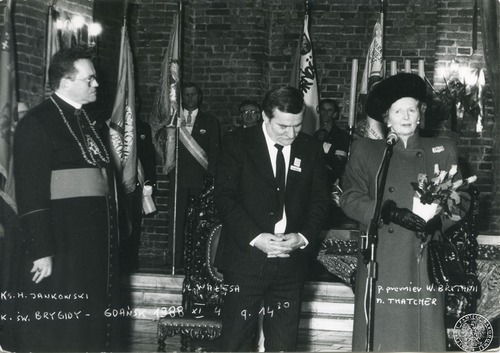 Prelate Henryk Jankowski, Lech Wałęsa and Margaret Thatcher at the St. Bridget Church in Gdańsk, November 4, 1988 (Photo from the archives of the Institute of National Remembrance)

Prime minister Thatcher’s visit to Poland did not bring the results expected by the authorities of the Polish People’s Republic. The government of the United Kingdom did not support Poland in the Paris Club regarding its foreign debts. However, the visit gave the Polish opposition hope of receiving the West’s support in putting pressure on the weakened communist authorities.