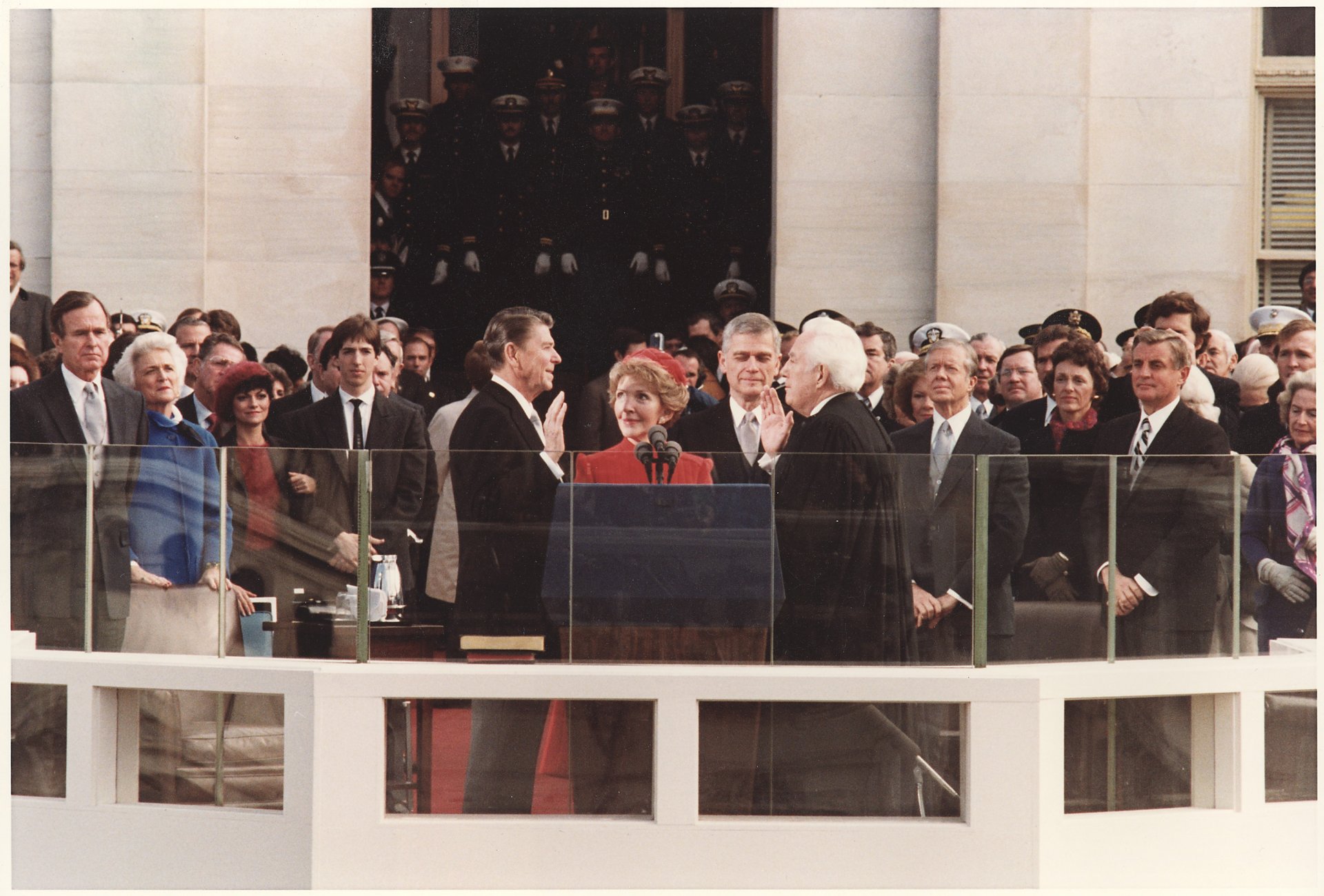 Ronald Reagan: from actor to President

Author: PATRYK PLESKOT 27.04.2022
Ronald Reagan was a figure of several faces and many opposites. He was the son of a Catholic and a Protestant, a Hollywood actor with his own star in the walk of fame and a President of the United States of America, a joker and a man on a mission, an old President with health issues and a determined warrior who wanted to defeat the Soviet “evil empire”.

He was a Democrat as a young man and later transformed into a Republican. What is, perhaps, most surprising is the fact that one could see both the spirit of an artist in his policies, of an emotional actor, and a stature of a cold, calculated analyst. What is even more striking is the fact that this mix worked very well. 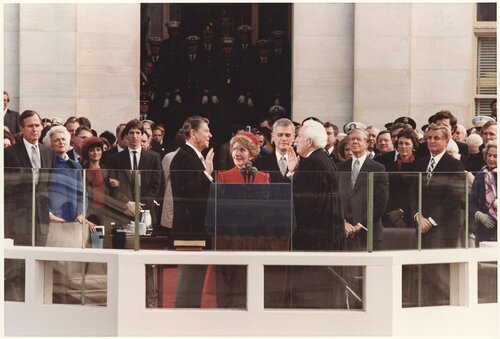 Ronald Reagan takes the presidential oath on the Capitol Hill by the then President of the US Supreme Court, Warren Earl Burger; Washington, January 20th, 1981 Photo: Wikimedia Commons/public domain 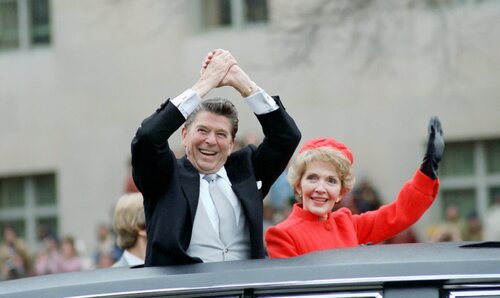 President Ronald Reagan with his wife Nancy waving to Americans from their limousine during the inauguration parade on the first day of his term of office; Washington, January 20th, 1981 Photo: Wikimedia Commons/public domain

What is, perhaps, most surprising is the fact that one could see both the spirit of an artist in his policies, of an emotional actor, and a stature of a cold, calculated analyst. What is even more striking is the fact that this mix worked very well.

Reagan was not treated seriously for many years and remained an unfulfilled politician. He was, after all, elected as the governor of California (famous for swiftly dealing with the hippies), but it seemed like it was the maximum of his abilities. He ran for the Republican nomination for president in 1968 and 1976 to no avail. He was successful four years later, when he was almost 70 (which in comparison to modern US elections is not that out of place).  He defeated George Bush in the race for his party’s nomination and he later offered him to become his vice president and run for office in the White House in November 1980. The previously competing politicians created a duet which ruled in the US for more than a decade. 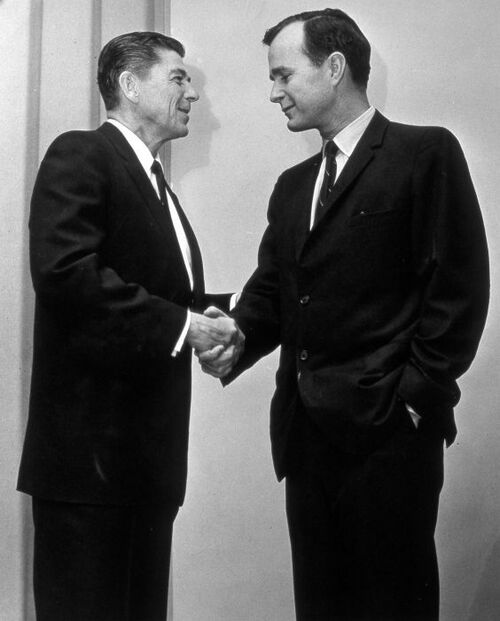 The presidential elections from November 1980 showed that many Americans thought the previous president Jimmy Carter had been rather soft, and his administration unable to deal with the economic crisis the United States had been struggling with since the middle of 1970s. Carter’s diplomacy was also under scrutiny as he had almost fanatically focused on the matter of human rights. The long imprisonment of American citizens in Tehran by Iranian revolutionaries was also a personal failure of the Democratic President and it led to a growing irritation of the public opinion. Meanwhile, the attack of the USSR on Afghanistan in December 1979 was a huge blow to his more relaxed policies as well. The effects of these sentiments translated into the ballots - Reagan received almost 51% of the votes, while Carter only 41%.

Just as the simultaneous rise to power of socialist François Mitterand in France meant a turn to the left, the presidency of the 70-year-old Reagan, officially commencing in January 1981, was a step to the right both in terms of internal and external policies. Reagan announced the limiting of federal bureaucracy. He introduced substantial budget cuts (mostly to social programmes) and lowered taxes, in turn systematically increasing the military budget (and public debt). The liberal turn in economic policies got the country out of recession. 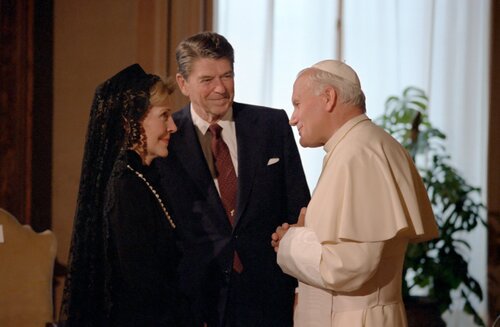 Pontifical Library of the Apostolic Palace, 1982. US President Ronald Reagan and his wife Nancy meet with Pope John Paul II during the visit of the political leader of the free world to the Vatican. Photo: Wikimedia Commons/public domain

Against the Empire of Evil

When it came to foreign policies, Reagan’s victory meant a tougher approach to Russia, although during the presidential campaign he tried to hold his tongue a little more. With passing time his stance grew ever stronger, partly influenced by the introduction of the martial law in Poland. Soon, by calling the USSR “the Evil Empire”, he took the United States to a new phase of the Cold War.

Reagan’s second victory in the US presidential elections, which came in November 1984, was even more spectacular than the first. Successes on both economic and international fields, as well as the citizens’ sympathy especially evident after the assassination attempt on his life in 1981 gave him nearly 60% of the votes despite the old age, and allowed him to prevail over his opponent, Walter Mondale, in as much as 49 out of 50 states. 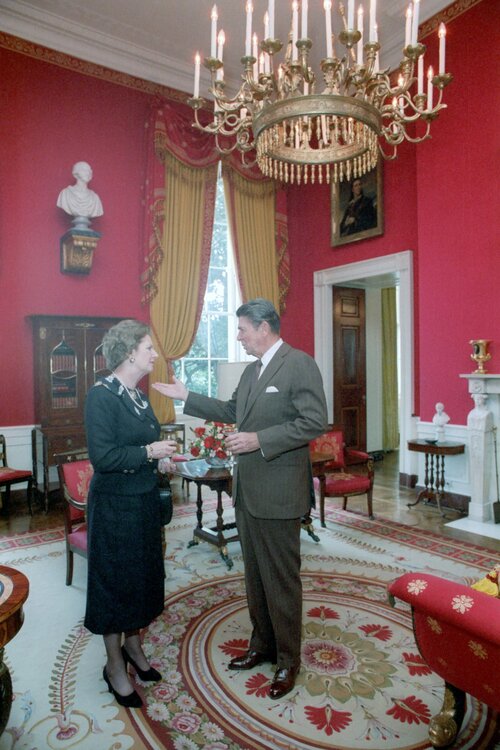 His second term of office, however, was not as successful. The society began to realise that the continuation of the small tax policies while constantly raising military expenditure deepened the budget hole. The Iran-Contras scandal also cast a shadow on Reagan’s presidency, meaning the White-House-approved operation of selling weapons to Iran. Earnings from this operation were allocated to support the anti-Communist insurgents in Nicaragua.

Just as the simultaneous rise to power of socialist François Mitterand in France meant a turn to the left, the presidency of the 70-year-old Reagan, officially commencing in January 1981, was a step to the right both in terms of internal and external policies.

The biggest successes Reagan still achieved in his relations with Moscow. He won the renewed arms race and forced Mikhail Gorbachev to go on the defence and hold unprecedented disarming talks which came to fruition in the summits in Reykjavik (October 1986) and Washington (December 1987). The American-Soviet agreements on this field were perhaps the biggest success of Reagan’s second term of office. It is also worth mentioning that the Iron Lady, United Kingdom’s Prime Minister Margaret Thatcher, remained his ally in his struggles with the Kremlin through both of his cadences. They both clearly liked each other and shared similar, conservative views. They became the symbols of the new, last phase of the Cold War. Nevertheless, their cooperation was not as smooth as it is generally perceived. 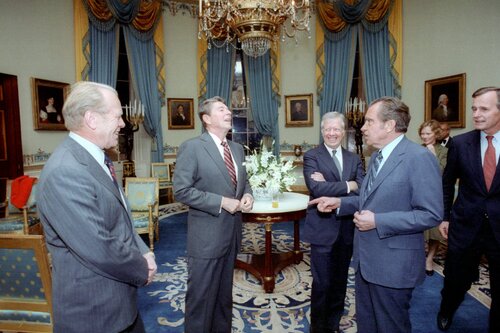 The Blue Room of the White House, 1981. The four presidents of the United States of America, the current Ronald Reagan and his predecessors: Jimmy Carter, Gerald Ford and Richard Nixon; on the right, the future president - George H. W. Bush. Photo: Wikimedia Commons/public domain

At the turn of the years 1988 and 1989, history, in a sense, made a full circle. After years of fighting for the highest office, George Bush won the American presidency. There was also another epilogue to this story: in January 2001, George W. Bush Junior, Bush’s son, became the 43rd President of the United States of America. Meanwhile, suffering from Alzheimer’s, Reagan passed away in 2004 at the age of 93, while Bush senior was mourned by the Americans in 2018, at the age of 95. 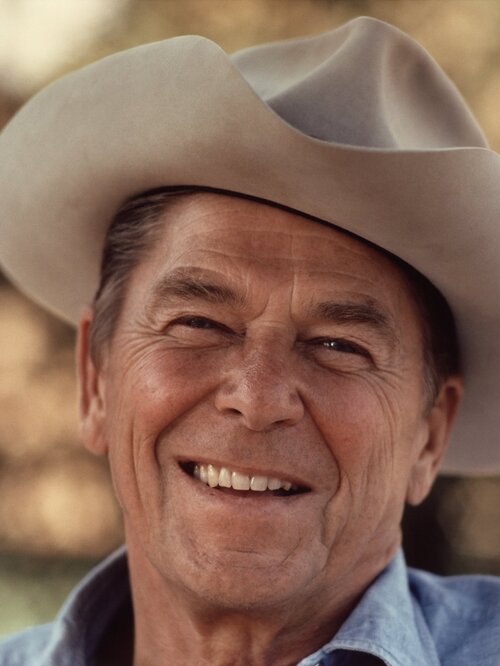