Jewish refugees after crossing the border with Switzerland, heading towards the city of Diepoldsau, August 1938
POLECAMY
Share
Retweet
E-mail
Artykuł

The Évian Conference in July 1938. An attempt to help Jewish refugees from Germany and Austria?

Author: KINGA CZECHOWSKA 11.04.2022
Although we usually associate the issue of refugees and forced migration with the state of war, Europe in the interwar period also experienced this crisis from other sources. The anti-Jewish policies of Germany from Hitler’s time forced more and more groups of people to leave their country and seek refuge abroad.

This had been taking place since 1933, however, a serious escalation of the crisis happened in 1938, following the Austrian Anschluss. Countries interested in the matter, to which refugees had already escaped in the past, quickly realised that the forced emigration of Austrian Jews would follow suit. The first step for many countries were actions making immigration more difficult i.e. through strengthening border control (the Netherlands) or by banning the issuing of entry visas for people with Austrian passports (France). Meanwhile, the public opinion in the United States began pushing for the “loosening” of immigration restrictions from the beginning of the 1920s. The calling of an international conference was to help calm down such attitudes without taking direct responsibility for the issue: several states were to search for a solution, not just one. It was also a way to show if not contempt then at least disapproval for Hitler’s policies.

The first attempts at helping the refugees

During these first years (1933-1938) and the more and more serious anti-Jewish repressions and forcing of emigration of Jews by the German authorities, the international communities undertook certain actions aiming to help the victims of these policies. Apart from the aid organisations, private initiatives or actions taken by various associations, official international institutions are worth mentioning: the High Commissioner for Refugees (Jews and others) from Germany - James G. McDonald since 1933 and then, in his place, the High Commissioner for Affairs of Refugees from Germany - Neill Malcolm since 1936. Their activities remained connected with the League of Nations which tried to find solutions to the refugee issue through them. They mainly concentrated on finding place ready to welcome the emigrants, which proved to be very difficult. The helplessness towards the ever-worsening German policies caused the first of the High Commissioners to resign following the introduction of the Nuremberg Laws in 1935. The office of his successor was initially to be disbanded at the end of 1938, but the worsening refugee crisis forced the officials to search for new solutions. 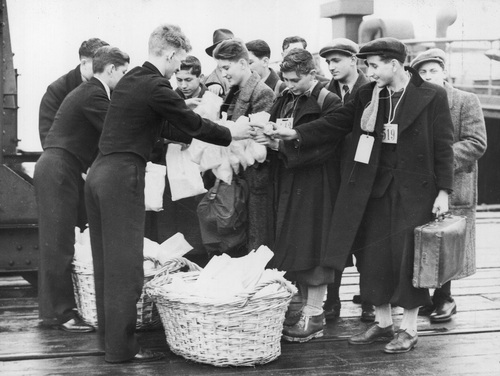 The invitation to Évian

The activity of the aforementioned institution was tied to the League of Nations. Meanwhile, in March 1938 a country which did not belong to the League saw the need to undertake certain steps - the United States. President Franklin D. Roosevelt proposed the idea of calling an international conference which would focus on the position of the refugees from the annexed Austria and Germany. From the beginning it was not meant to be a singular event, but the start of the functioning of a new committee which would deal with the issue. At the same time, already during the stage of sending out invitations, it was announced that all existing immigration restrictions were to remain in force and that no country would be bound to let in more refugees inside its borders than written in the existing laws. This shows a certain disconnection between the declared goals and the means to fulfill them. It is also worth pointing out that Jewish refugees were never specifically mentioned, but rather political refugees. It is difficult to say who the organisers wanted to offend less: Germany through meddling in their internal affairs (as it could have been read) or potential immigration states which were becoming more and more eager to welcome immigrants of Jewish origin.

In the end, the French resort Évian-les-Bains was chosen for the place of the conference and July 6-15 as the time of the debate. Delegates from 32 countries took part in the discussions as well as, although in a different role, various aid organisations. Apart from them, some other states sent their observers, including Poland and Romania, as they at least wanted to follow the course of events. Many editorial offices from all over the world sent their journalists to observe the talks for their respective political affiliations. 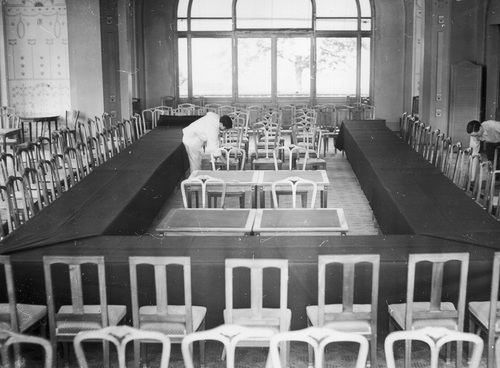 Preparations of the hall in the Royal Hotel in Évian-les-Bain for the international conference on political refugees from Austria and Germany, July 1938 Photo: NAC

How to help the refugees?

One success of the talks was the establishing of the Intergovernmental Committee on Refugees as planned, as well as adopting a broader than before definition of a refugee. From that point on, it not only included people who left Germany, but also those who still remained in the country. It was to allow members of the Committee to hold talks with the German authorities on planning further migration and its most appropriate conditions, instead of solely dealing with the effects of the already existing chaos.

Nonetheless, the lack of places where the refugees could go to was still a problem. The biggest disappointment was the stance of Great Britain as the largest colonial power and, more importantly, holding a mandate over the country crucial for the Jewish hopes - Palestine. The British delegate, a conservatist known for his pro-Arab views, Edward Turnour, lord of Winterton, only in his final speech addressed this region and firmly excluded the possibility of mass immigration of refugees there. Delegates of other nations also did not want to welcome a huge number of refugees, arguing i.e. that it was due economic problems or fears of “racial issues” in their countries. The only exception in this regard was the Dominican Republic, however, its readiness to take in refugees was only an attempt at improving the image of dictator Rafael Trujillo after the genocide committed on Haitians a year earlier. This radical example serves to show a wider problem of the Évian conference which was more smoke and mirrors than an actual attempt to organise help. It was mostly aimed at fulfilling various political goals of individual countries. 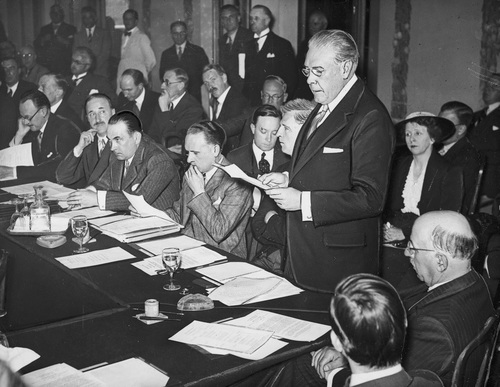 A speech of the US delegate Myron Taylor during the Évian-les-Bain conference on political refugees from Austria and Germany. In the picture (to the right of the speaker) sits the Secretary-General of the League of Nations Joseph Avenol, July 1938 Photo: NAC

Even though compassion for the repressed was often underlined at the conference, the gathered representatives could not muster much more.

The Intergovernmental Committee on Refugees began its activities, but achieved little to none before the outbreak of the Second World War. Certain administrative issues were resolved like the appointing of Herbert Emerson as the chairman of the Committee who was earlier chosen as the High Commissioner on Refugees under the Protection of the League of Nations. Thus, finally only one person dealt with the international and institutionalised efforts for refugees. In the following months there were also attempts to protect refugees from Czechoslovakia, while in the summer of 1939 the Committee agreed to include Polish Jews forcibly relocated from the Third Reich. If this alone was too much for the limited capabilities of this institution, the challenges of the time of war overstrained it entirely. 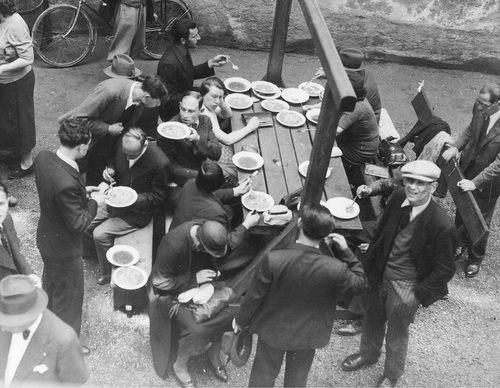 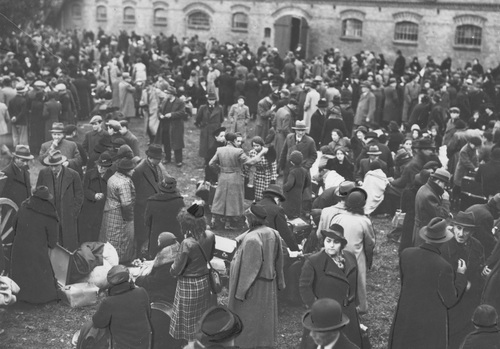 Poles of Jewish origin, forcibly relocated from Germany, at the premises of the riding school of the former military barracks in Zbąszyń, October 1938 Photo: NAC

All efforts at humanitarian actions, including the Évian conference in July 1938 are worth noticing. At the same time, while it is important to admire references to noble values and motivations, it does not mean that we should not ask about other motives or try to evaluate the effectiveness and adequacy of these actions. In the case of Évian, the most obvious route is to evaluate its results through the events that followed as a wasted opportunity to save the victims of the Holocaust. But even if we decide to deviate from these ahistorical criteria, it is difficult to find much positives about the conference. It seems like the governments, getting used to the rising pressure in regards to the issue of refugee aid, were instead satisfied with political manifestations, and, in the face of real issues, effectively avoided making promises they could not keep. 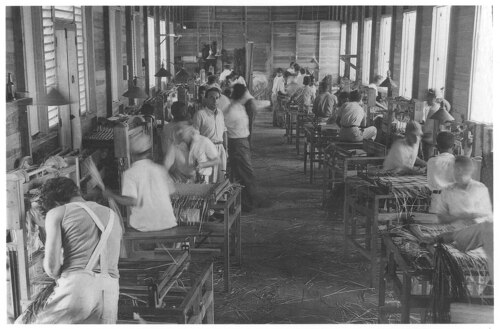 Jewish refugees in Sosúa, Dominican Republic, working in a factory producing straw handbags to be exported to the United States, 1943/1944 Photo: Public Domain