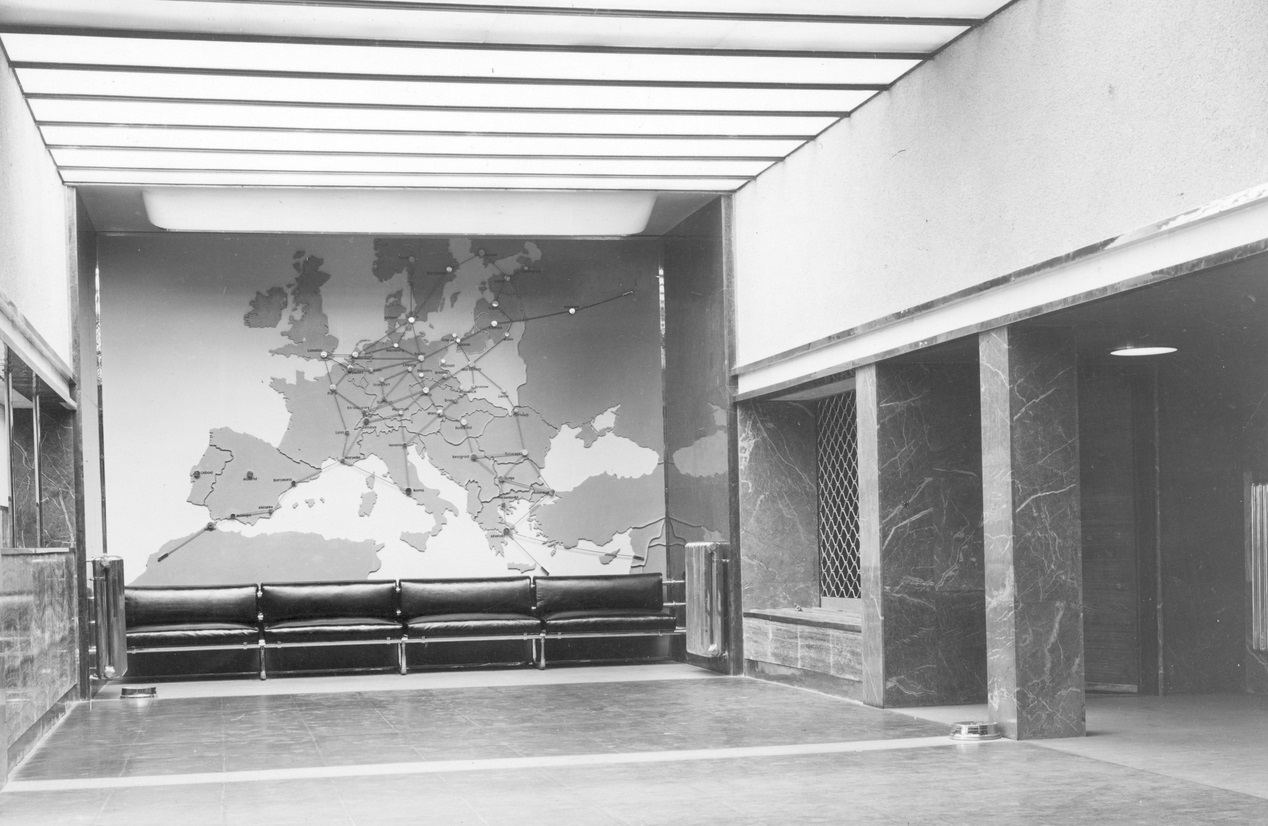 Part of the interior of Warsaw airport with a map of flight connections in Europe, May, 1934 Photo: NAC
TYLKO U NAS
Share
Retweet
E-mail
Artykuł

Author: SŁAWOMIR ŁUKASIEWICZ 12.08.2021
The idea of uniting Europe has a rich tradition and strong roots in Polish political thought. Beginning with the Christian traditions treating the space of Europe as Chris-tianitas, along with the development of reflection on politics and international rela-tions, new concepts of European unity appeared.

In the tradition of Polish thought, it is appropriate to mention the visions of King Stanisław Leszczyński or prince Adam Jerzy Czartoryski. But also in the mid-twentieth century - when Poland lost its independence again after two decades - the ideas of building a union of Central European states or nations, which would be strong enough to be able to oppose any possible aggression, and thus protect these states and nations against new wars, were revived.

During the war and under the Iron Curtain

The talks on this subject were conducted by emigrants gathered, among others in London or New York. In London, they focused on the future Polish-Czechoslovak union and on the Polish side they went so far that even a constitutional act of the future Polish-Czechoslovak federation was prepared, recalled, inter alia, in the book by Tadeusz Kisielewski. In the United States of America, they met as part of the Central and East European Planning Board, as well as during the publishing of the New Europe and World Reconstruction magazine. These works were perfectly summed up by Feliks Gross in his book Crossroads of Two Continents- a work almost forgotten today and never translated into Polish. This well-documented book was a desperate call to unite efforts to prevent further tragedies that could easily happen where continents cross.

In 1954, the Assembly of the European Subjugated Nations, or ACEN, was established - no more no less an experimental attempt to create a Central European parliament-in-exile, or, as it was described, a small UN, representing the nations subjugated by the Soviet Union.

After the war, although it might have seemed that the idea of ​​a Central European federation would die completely, it was not the case. The emigrants continued to consider a possible union of states or nations in the region, as did for example Marian Kamil Dziewanowski in his brochure about the Intermarium from 1947. Entire new possibilities were opened by the creation of the American National Committee for Free Europe, better known by its later name as the Free Europe Committee. In the complicated situation of the Polish diaspora, already divided in 1950 into three centres of power, it was an opportunity to build various political initiatives thanks to American funds. It is no coincidence that in 1949, for example, the Union of Polish Federalists was established, with important branches in France, Great Britain and the U.S. As part of this organization, the future forms of the Central European federation were discussed, research was carried out (e.g. for the Mid-European Studies Center), the idea of ​​Polish-Czechoslovak cooperation came back, and with time the Polish-Czechoslovak-Hungarian cooperation returned as well. 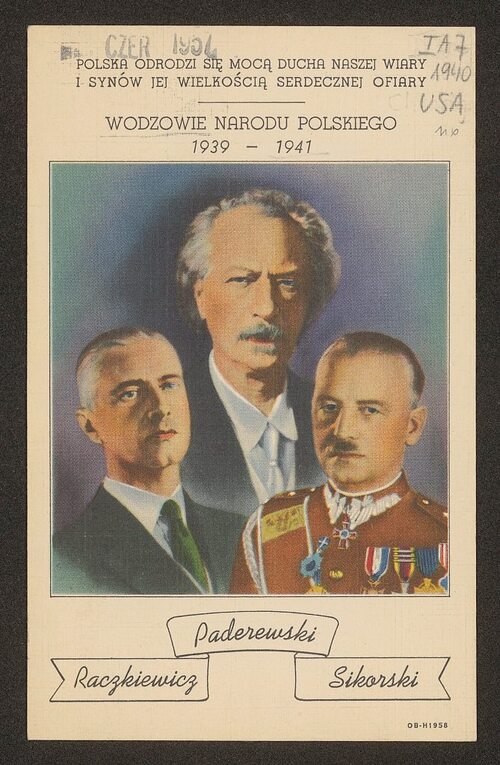 It was in this climate that in 1953 another periodical published by emigrants, entitled The Central European Federalist, was created. It is easy to notice the analogy to the American The Federalist Papers, which were the foundations of the U.S. federal system. It was supposed to be a Central European Federalist and would play a similar role in the region. All of this happened as Western Europe began to unite. Poles also took an active part here (to recall the role of Józef Retinger at the Congress in Hague in May 1948). But these were also attempts to propose similar solutions for Central and Eastern Europe. The concept itself was introduced by an advocate of federalism, Oskar Halecki. Jan Wszelki proposed economic solutions that would allow for the integration of the region, as it was in the case of the western part of Europe, and it was no coincidence that Edward Raczyński proposed the “Eastern Schuman Plan”. Juliusz Mieroszewski, in the pages of the Paris-based Kultura [Culture], wondered about the possibility of building the Central European Brigade, which could act as the first formation of a joint army. In 1954, the Assembly of the European Subjugated Nations, or ACEN, was established - no more no less an experimental attempt to create a Central European parliament-in-exile, or, as it was described, a small UN, representing the nations subjugated by the Soviet Union. And while 1956 dispelled many of the illusions surrounding America's liberation policy, many of these initiatives survived into the 1970s, and some even to the collapse of communist systems in Central and Eastern Europe. 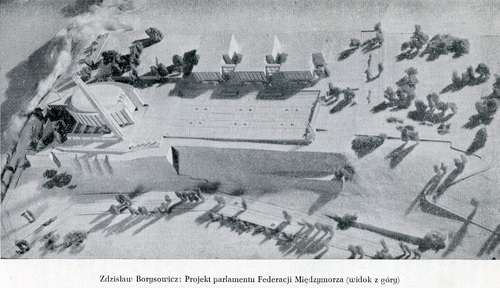 Illustration from the book by Marian Kamil Dziewanowski We are not alone. On the coun-tries and nations of the Intermarium. Polish library in Great Britain, London 1947

Vision of a Free Europe

The emigrants did not lose their optimism at all. Since the 1950s, the united Europe has been regularly talked about in the Polish Broadcasting Station of Radio Free Europe by such personas as Wiktor Sukiennicki, Jan Krok-Paszkowski, and in later years also Zdzisław Najder. In the mid-1960s, the first Polish language textbook on European integration was written by Piotr Wandycz and Ludwik Frendl (United Europe. Theory and Practice), which emphasized the centuries-old Polish traditions in this field. In 1963, in the booklet Poland and New Europe, Aleksander Bregman wrote:

“Our European program must be the program for today and tomorrow. It must, for the time being, aim to counteract anything that would separate Poland even more from the uniting Europe. And in the long run, it must be preparing for the moment when this historic process will finally also cover the eastern part of our continent.” 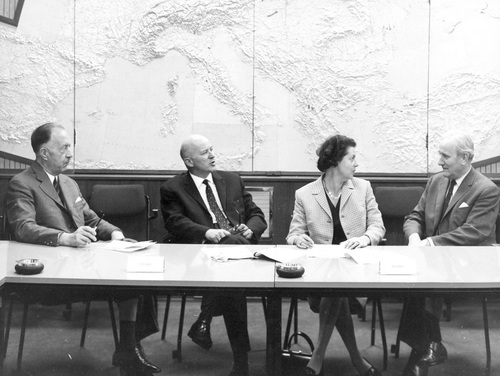 Polish efforts to become part of a free and united Europe are an important element of our common history and the memory of them should be particularly protected. If you are interested in the subject, please read my book entitled Trzecia Europa. Polska myśl federalistyczna w Stanach Zjednoczonych 1940-1971 or its English version Third Europe: Polish Federalist Thought in the United States, 1940–1970s.