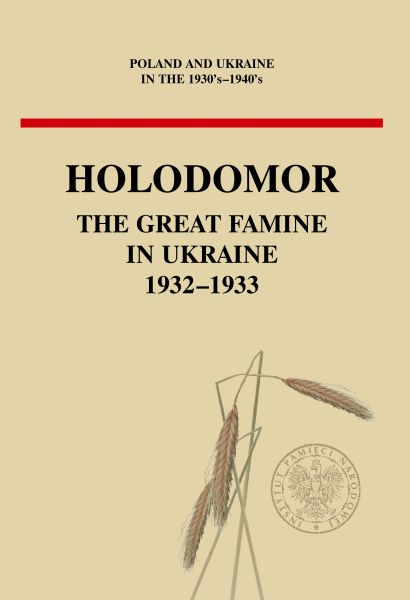 The Great Famine of the years 1932–1933 is a unique event in the history of Ukraine, and even today this tragedy is a cause for heated reactions. This publication, which is the seventh volume in the series entitled “Poland and Ukraine in the 1930’s – 1940’s.

Unknown Documents from the Archives of the Secret Services”, presents archival materials of the Polish and Ukrainian secret services on the situation in Ukraine during that dramatic period.

In the years of the Stalinist regime, the Ukrainian nation was exposed to cruel repression. Today it can be stated with certainty that among all the “brotherly republics” of the former USSR, Soviet Ukraine suffered the heaviest losses in human life. Questions continue to arise concerning the sources and the circumstances in that catastrophe, as scholars in various countries work to provide credible answers to those issues. A dispute over the number of the victims is an element of that process.

One claim is indisputable: the Ukrainian famine of the years 1932–1933 can neither be forgotten nor ignored. It was an important link in a chain of catastrophes which struck Europe in the 20th century. It came to be reflected in the declarations adopted by the governments and parliaments of numerous states which recognize the famine of the 1930’s as genocide committed against the people of Ukraine. On 28 November 2006, such a resolution was adopted by the Verkhovna Rada of Ukraine, and on 16 March 2006, a similar document was adopted by the Senate of the Republic of Poland, followed, on 6 December 2006 by the Lower House of the Polish Parliament.

Knowledge of the Holodomor is growing constantly, as new documents are made public, disclosing the activities of the top leaders of the USSR in the years 1932–1933 and the working methods of the local apparatchiks, particularly those with roots in the Soviet party nomenklatura of the Ukrainian SSR. This knowledge fosters understanding of the mechanisms behind the crime and understanding of the means through which the Stalinist regime would destroy the Ukrainian nationhood, justifying it with the necessity of social modernization while, in fact, aiming to completely subordinate and humiliate Ukraine. The documents made available give clear proof to the doctrinal and immediate motive driving the communist establishment while allowing for the reconstruction of the contemporary situation both at the macro- as well as the micro-level. It is worth emphasizing that different regions of the USSR in the years 1932–1933 would witness much different approaches taken by the authorities to fit with the specific conditions of each region.