Eradicate or denationalise? The German and Soviet program of fighting against the Polish nation

Author: Maciej Mazurkiewicz 05.11.2020
The characteristic of the German and Soviet crimes on Poles includes terms regarding the goals, methods and scale of realisation of the anti-Polish policies during the Second World War.

To best exemplify this one can compare the activities of the authorities of the Third Reich and Soviet Union, as well as place their way of operating when it comes to Poles in the context of other models of occupation. The way the occupants dealt with the Polish minority living at the Soviet, German and Gdańsk territories prior to 1939 is not without its importance.

One can assume what the intentions of the occupying authorities towards the Polish nation were based on facts, but also thanks to the recovered documents. First of all, the occupiers peculiarly defined their definition of Poles for their criminal policies. They used internal divisions in this category which, taking into account the specifics of the inhabited territories, determined the approach towards individual groups of Poles. 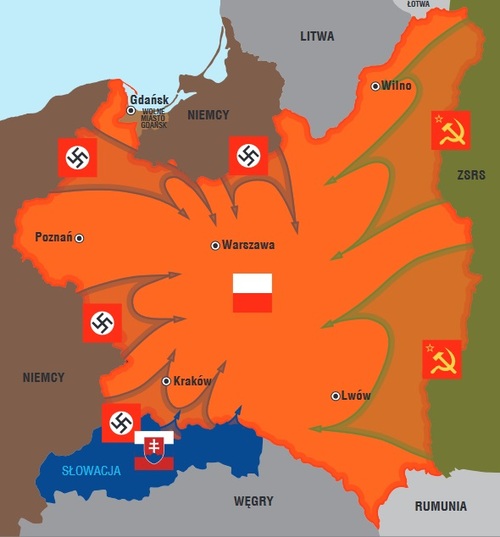 Aggression on Poland in September 1939 Photo from the book by M. Korkuć The Fighting Republic of Poland 1939-1945, illustration by Tomasz Ginter

German actions compared to Soviet ones

The German authorities first eliminated the Polish elites. Due to the lack of possibility to completely and immediately exterminate Poles, social groups of lesser nation-building potential were set apart. By evaluating threat levels, they chose the most available and efficient ways of lowering the number of Polish population and lessening its potential for rebuilding itself. Any signs of resistance were being relentlessly destroyed. The other part of the Polish nation were intended to be eradicated by slave labour and creating living conditions estimated for high mortality rates. A symbolic group of Poles was to be Germanised as a result of a positive racial selection.

The German authorities first eliminated the Polish elites. Due to the lack of possibility to completely and immediately exterminate Poles, social groups of lesser nation-building potential were set apart.

Similar ambitions of eradicating Polish elites were presented by the Soviets, although they used different methods in their approach. Instead of using direct extermination, except from crimes such as the Katyń Massacre (1940), they focused more on eliminating the roots of Polish national identity and enforcing the Soviet values. This type of approach also concerned some of the Polish elites, whose representatives were offered cooperation1. The crucial goal of the Soviet depolonisation policy was to break up the Polish population with the land it occupied. The breaking up of that relationship efficiently decreased the nation-building and defence capabilities of the Polish commonwealth. The Germans could not orchestrate such actions on such a scale. The best way to picture the intentions of both occupants would be to present the situation like a scene from the doctor’s office, where the doctor offers two solutions upon diagnosing the patient. It turned out that the patient suffers from Polishness, the German doctor applied eradication, while the Soviet one – radical therapy.

The basis to begin the fight with Poles became the conquest of the national organisational structure which was the Polish state. Its planned eradication and war operations allowed the German authorities to physically exterminate the Polish elites (mainly in autumn 1939 and then spring and summer of 1940). The remaining part of the Polish population was repressed, under conditions aiming to degenerate and decrease it in the shortest time possible, until it disappeared entirely. A small number of Poles was to be efficiently turned German. The Soviet state was late, compared to the national socialists, to begin its operation of murdering Polish officers (including civilian elites) in Katyń and other places of internment (in spring 1940). Many Poles, as alleged political prisoners, were sent to gulags. Between 1940-1941 four mass deportations of the Polish population were conducted. Those who survived the journey battled with tough environmental conditions and were repressed. Poles were subjected to programs of social engineering realised in the USSR like denationalisation, atheisation, collectivisation of the agriculture and dekulakisation. Polish national heritage was despised or destroyed2, often however adapted to the needs of the Soviet Union. The territory of Poland was included in the USSR, while the Vilnius land was handed to Lithuania.

The German and Gdańsk authorities repressed the Polish diaspora in various ways, systematically limiting the rights of the Polish citizens of the Third Reich and paralysing their work. The Polish nationality in the USSR was treated different.

The occupants managed to break up the citizens’ bond between Poles and the Polish state, making them the subordinates of Germany of citizens of the USSR. Despite the brutal activity of the regimes towards Poles, one needs to differentiate between the German enslavement and the difficult situation of a Soviet citizen resulting from his Polish nationality.

The problem of scale

In comparing the realised and planned cruelties towards Poles of both the Third Reich and Soviet Union there is a problem of scale. The German authorities intended to realise their program of eradicating the Polish nation as quickly as possible. Following the extermination of Jews a similar fate would most likely meet Poles. The crowning of the anti-Polish policy of the Third Reich would be the destruction of the Polish nation and all of its culture. The goals of the Soviet program did not include physical extermination of Poles on a mass scale, but rather focused on denationalising them. This plan was calculated for a long time. It is hard to estimate the success of the Soviet strategy since a substantial number of Poles in the USSR was able to retain their national identity (some of them were able to come back to their country). The sizes of the German and Soviet concepts of eradicating the Polish nation were very different. The small amount of resistance against the enforced Soviet set of values enabled Poles to survive in the USSR, even as second-class citizens, while the open acceptance of the regime brought social and labour promotions. Such possibility was not considered in Germany: Poles brought over as slaves were supposed to die in time (a small number of them were to be turned German). 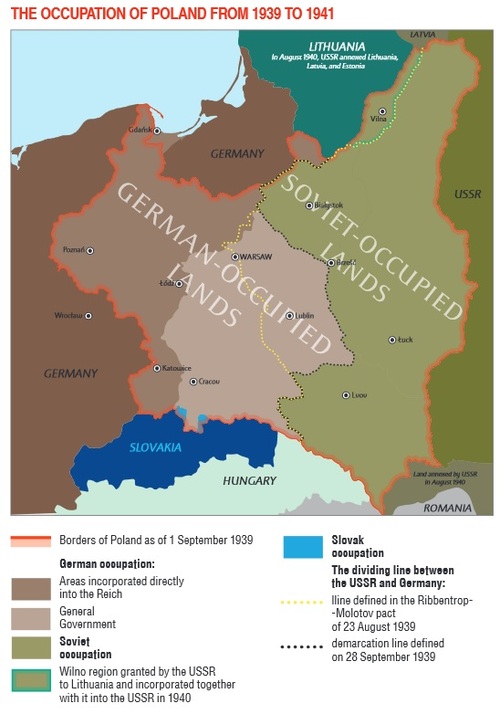 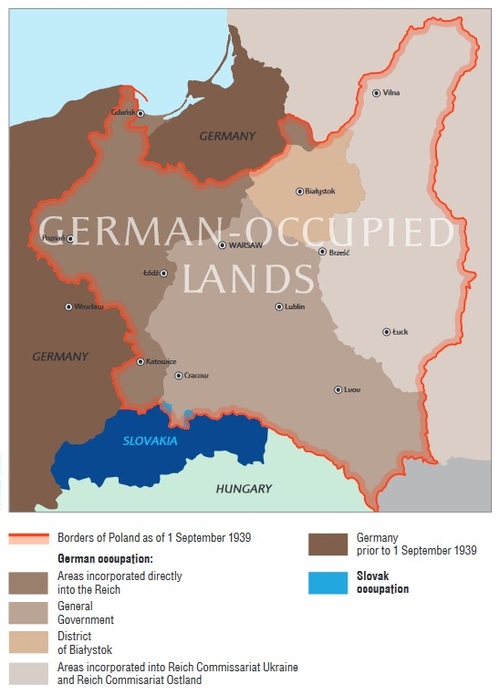 It is worth taking a look at the models of occupation which the authorities of the Third Reich and USSR employed in other occupied countries and how they defined their approach towards the local populations, which will provide a broader context for our comparison. Czesław Madajczyk was right to point to six models of occupation practised by the German state. Publishing before 1989, the Polish historian limited his work to the Third Reich. Using his typology, it is not possible to describe the Soviet occupation scheme in one way. In some way it was defined as “genocidal”, but on the other hand the Soviets approached Poles with some level of caution. The creation of communist Poland and the death of Stalin positively influenced the Polish minority living in the USSR. To compare, the German plans and actions did not include a similar scenario of creating even a dependent Polish state.

Approaching the conclusion it is impossible to omit the matter of the functioning and status of the Polish minority in the USSR and Third Reich before the outbreak of the Second World War. The German and Gdańsk authorities repressed the Polish diaspora in various ways, systematically limiting the rights of the Polish citizens of the Third Reich and paralysing their work. The Polish nationality in the USSR was treated different. Polish National Territories were created in the Ukrainian (the Marchlewsk land) and Belarusian (the Dzierżyńsk land) Soviet Socialist Republics, which was a testimony to the propaganda favouring of Poles by the Soviet state. During the great terror (1934-1939) repressions against many minorities increased. Between 1937-1938 the Polish operation of the NKVD was conducted (analogically against the Soviet Germans). Large groups of population were deported (Koreans and Cossacks) or starved to death (Ukrainians, Kazakhs). The similar approach of the Soviet state, however, does not diminish the losses suffered by Poles.

The Second World War and occupation of the Polish territories increased the efforts of the Soviet and German authorities to eradicate Poles. While the Third Reich first and foremost strived to physically exterminate the Polish nation, the policy of the USSR was to eliminate Poles’ national identity. Nearly half a century of Soviet domination in Poland caused many difficulties of national life, but after the breakthrough of 1989 the rebirth of the state was possible. Would the German occupation lasting a similar amount of time give similar results? Perhaps this may be an unpopular opinion, but under these circumstances the Soviet rules in Poland in a way might had been a “liberation” from the program of complete eradication of the Polish nation realised by the Third Reich.

1 Kazimierz Bartel, the five-times Prime Minister of Poland, during the Soviet occupation continued his lectures and the Lviv University of Science. He was invited to Moscow, perhaps to offer him a creation of the Polish government. As a result of the German invasion of the USSR, Bartel was almost immediately arrested and then shot in prison.

2 For example: while the Germans blew up and cut with torches the Warsaw statue of Fryderyk Chopin in 1940, the column of Adam Mickiewicz is still standing (to this day) in Lviv.