June elections – the swan song of the Polish communism

Author: MICHAŁ PRZEPERSKI 03.06.2020
In January 1947, the first post-war parliamentary elections were conducted in Poland. Although one of its participants was the Democratic Bloc – consisting of, among others, the Polish Workers’ Party – they were the absolute opposite of democracy.

Voting was conducted in an atmosphere of total terror and the votes were counted with “tested” Soviet methods. The opposition was dropped off the face of the Earth – this was the beginning of lies of the communist system in Poland.


“Elections” in the communist system

“elections to the Sejm, which were conducted in Poland under the rule of the communist party, did not meet even the most basic democratic criteria. The voters going to polling stations de facto made no impact on the shape of the <<highest state authorities>>”.

In the following years, Poles learned from the “People’s Tribune” newspaper that the support for the communist authorities was almost absolute, which was the easier since there was only one list one could vote for, prepared by the committees of the Polish United Workers’ Party, or PZPR.

In June 1988, following the elections to national councils – the dummies of local municipalities of the Polish People’s Republic – it was announced that the voter turnout was at 55 percent. It was the lowest turnout officially noted between the Oder and Bug rivers during the communist rules.

The voter turnout reached extraordinary levels: between 1952-1980 it never fell below 94 percent. It was the accumulated effect of the pressure of the state apparatus and the outright electoral manipulations.

In June 1988, following the elections to national councils – the dummies of local municipalities of the Polish People’s Republic – it was announced that the voter turnout was at 55 percent. It was the lowest turnout officially noted between the Oder and Bug rivers during the communist rules. Although independent observers pointed out that, in reality, it was visibly lowered, it was definitely an image failure of the communists.


Road to the round table talks

It was another reason – following the April-May protests of 1988 – behind the growing social unrest. After several weeks, the protests began anew. Although they were not as big as the ones from August 1980, they still contributed to the breaking of the political stalemate in Poland. On August 31st 1988, the head of the Ministry of Interior, Czesław Kiszczak met with Lech Wałęsa. 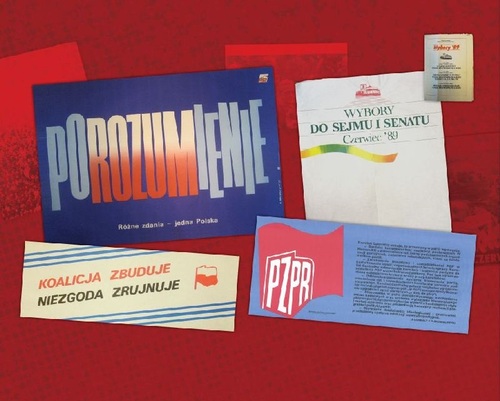 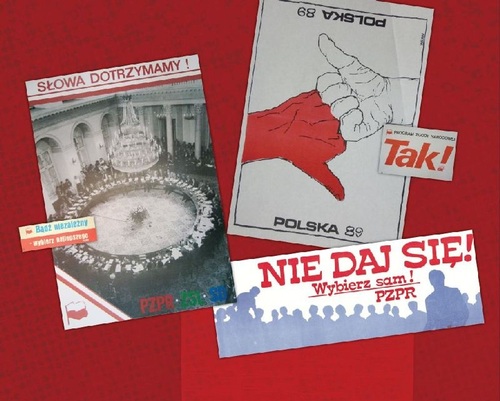 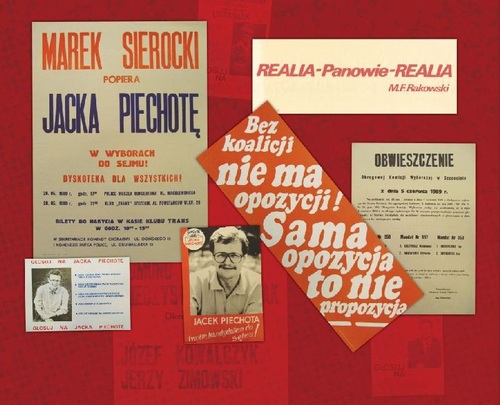 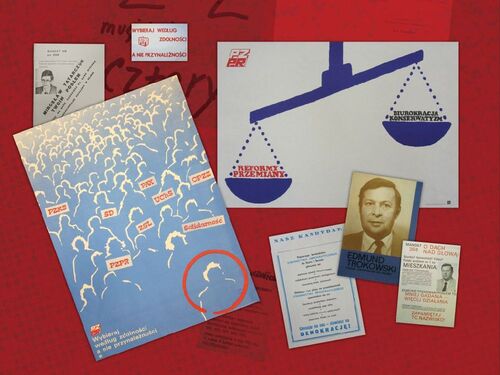 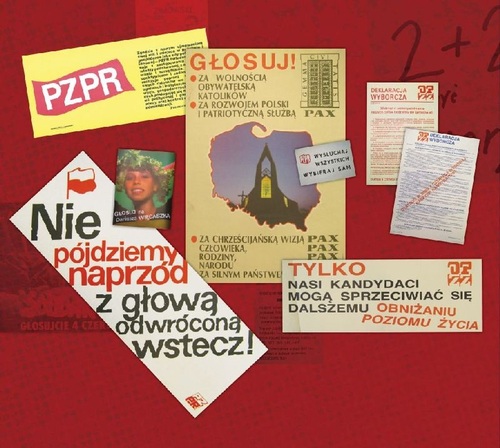 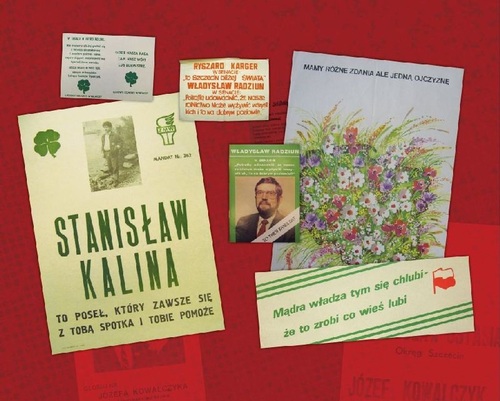 Electoral materials of the Polish United Workers’ Party and its political satellites. Exhibition of the Institute of National Remembrance “1989. Birth of freedom. June elections of 1989 in Szczecin”

Five long months had passed before the dialog between the communists and the leader of the underground Solidarity movement and his group of advisors and associates led to the Round Table talks. Political opponents sat at the same table: victims and perpetrators. This solution referred to the process Spain experienced a decade earlier after the fall of Gen. Franco’s dictatorship. However, such a solution was not entirely new for the communist bloc. Especially since the Round Table talks were not supposed to bring a change of power, not to mention the fall of the system. The ruling camp intended to strengthen it by including part of the opposition in it and sharing the responsibility for the country’s situation. “Wałęsa’s group” – as it was called in the party’s offices – in turn wanted to re-legalise the Solidarity movement, as it was banned during the martial law under the barrels of military rifles.


Electoral deal with the communists

Negotiations were taking place until the very last moment. The most important points of the deal signed on April 5th 1989 were the creation of the Senate and a sort of electoral contract. Under the contract, 65 percent of the seats in the Sejm (299 mandates) were guaranteed for the Polish United Workers’ Party and its political satellites (the so-called coalition). The number of the mandates was divided into 264 and 35 – the former were to be allocated to multi-mandate constituencies, and the latter included in the so-called “country list”. The remaining 35 percent of seats (161 mandates) were to be fought for by non-partisan candidates in free elections, while the 100 mandates in the newly created Senate were to be chosen in free elections in single-mandate constituencies.

The ruling camp intended to strengthen the system by including part of the opposition in it and sharing the responsibility for the country’s situation. “Wałęsa’s group” – as it was called in the party’s offices – in turn wanted to re-legalise the Solidarity movement, as it was banned during the martial law under the barrels of military rifles.

On April 13th 1989, the National Council set the dates for the two rounds of elections for June 4th and June 18th. It meant that the Solidarity side had very little time to gather signatures, reconstruct the official structures and organise campaigns for independent candidates. This was exactly what the communists hoped for, as they had an expanded and, as it was believed, an efficient apparatus of electoral agitation. The events, however, went in a completely unexpected direction.

The Solidarity movement – after resolving internal conflicts – decided to put up exactly 100 candidates for the Senate and 161 for the Sejm. As a result, a voter who wanted to support Solidarity had a clear choice. The PZPR did the exact opposite, as it got too excited about the wider margin of in-party democracy. Not only did the communists put up unknown candidates but also those who fought each other. There were cases where the candidates of the PZPR tried to hide their political affiliation believing it to be compromising. The party structures were lazy and lacking motivation, they did not even try to actively support their own candidates. The opposite could be said about the Solidarity side which made true shows of their electoral rallies using the support of the Catholic Church and foreign celebrities (among others, Stevie Wonder, Grace Jones or Jane Fonda).

The main newspaper of the Solidarity movement “Gazeta Wyborcza”, which first issue showed up in kiosks on May 8th 1989, broke the information monopoly of the communists and was one of the most palpable evidence of change. After all, the most important element of the contract elections was the fact that, for the first time in several dozen years, the voters had a real influence on reality, as there was a real alternative to the communists. Of course, it was clear that they would not lose power, but the outcome of the free part of the elections could question the political legitimacy of the coalition to rule.

Lech Wałęsa, on the eve of the elections, tried to tone down the emotions by pointing out that the idea of the Solidarity movement winning all the mandates in the Senate was nothing but a dream. In the meantime, the atmosphere among the highest-ranking officials of the PZPR varied: it went from enthusiasm (Zygmunt Czarzasty was afraid that the win of the communists may be too crashing), to resignation (Andrzej Werblan predicted a dramatic defeat already in March 1989). The surveys of the Centre for Research of Public Opinion, often used by Jaruzelski’s regime, pointed to an inevitable defeat, but even the researchers hired in this institution had very different interpretations of the data. 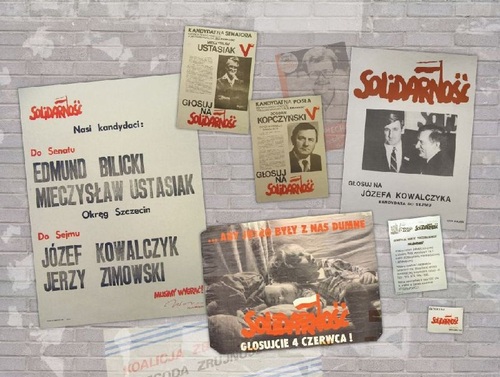 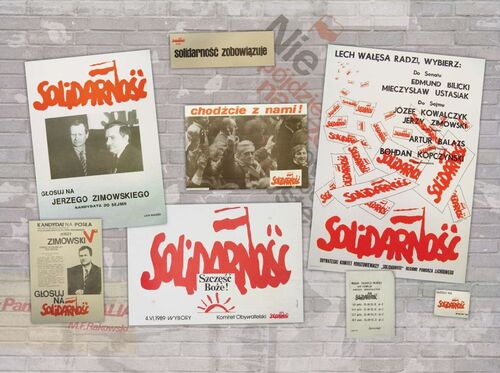 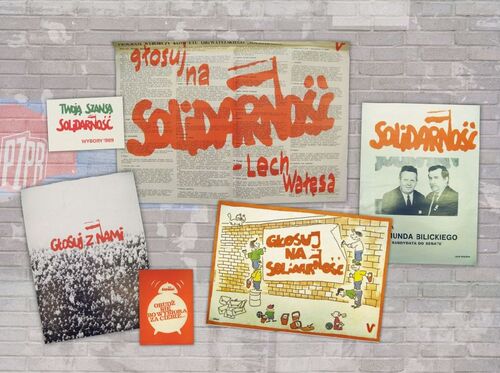 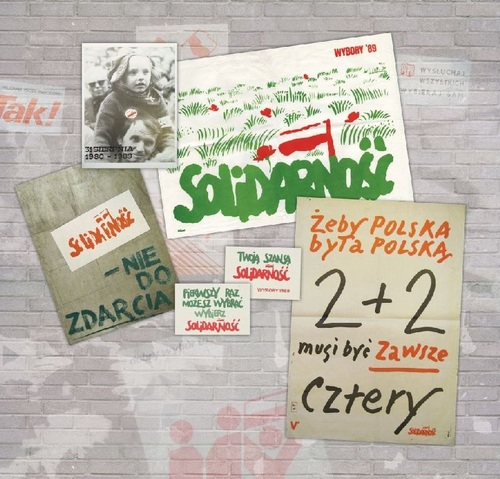 Electoral materials of the Solidarity movement. Exhibition of the Institute of National Remembrance “1989. Birth of freedom. June elections of 1989 in Szczecin”

Context of Tiananmen and a troublesome victory

On June 4th 1989, there was beautiful, sunny weather in most of the country. 62 percent of Poles went to the ballots – less than expected. Surprisingly, the Polish experiment with more areas of freedom, observed by the entire world with great interest, got a terrifying counterargument. On the same morning, the Chinese communists bloodily dealt with the protests in Beijing, at the Tiananmen Square, where students demanded democracy.

Here is a fragment of memoirs of a renowned historian, Andrzej Paczkowski who served as a returning officer of the Solidarity movement in a polling station in the Polish People’s Republic’s embassy in London:

“Around noon, I went outside for a moment for a cigarette. (…). It was a picnic-like atmosphere. Suddenly, a procession appeared from the nearest street. Along the pavement, right next to us, walked the Chinese. They were generally young people, a few hundred of them. They wore black bands on their heads and carried black coffins. They are silent. They do not sing, do not shout, march silently. Seeing this, our little, Polish crowd went silent too. We stood by the curb. Someone raised their hand with two fingers forming the Solidarity sign. Everyone joined in. The Chinese responded with the same gesture. It was an extraordinary moment.”

Tyranny triumphed in the Far East, but in Poland the communist regime was starting to lose ground. In the first round of the elections, the Solidarity movement got 92 out of 100 mandates in the Senate and 160 out of 161 non-partisan mandates in the Sejm. The coalition only got five MP mandates in the first round, including two from the national list. It meant almost total defeat of the national list: among those who did not receive mandates were Prime Minister Rakowski, Minister of Interior Kiszczak and Minister of National Defence Siwicki. The PZPR was shocked with the defeat, while the Solidarity movement – with the scale of its victory. Members of the opposition, remembering the martial law, feared that the communists would once again resort to violence, while they used that fear to their advantage. Hence, a compromise was made which was a clear violation of the law: the Solidarity agreed to the coalition receiving 33 mandates, originally meant for the national list, in the second round of the elections. If that had not happened, the stability of the political system would crash immediately.

The second round of the elections conducted on June 18th had the turnout of only 25 percent. It was the case, first and foremost, because this time Poles could vote almost only on representatives of the coalition.

A compromise was made which was a clear violation of the law: the Solidarity agreed to the coalition receiving 33 mandates, originally meant for the national list, in the second round of the elections. If that had not happened, the stability of the political system would crash immediately.

Some of them, won over their rivals only due to the support of the local Solidarity groups, what in the future undermined the integrity of the ruling camp in the Sejm and laid the foundations under the final crash of the political construct created at the round table.

This way, even though the contract elections from June 1989 were to guarantee four years of stable ruling for the Polish United Workers’ Party, they became the stone which caused the avalanche. The communists lost the rest of the will to fight, while Solidarity’s politicians, in the following weeks, realised that the trust of the voters allowed them to take political initiative. Still, on July 19th the President of the Polish People’s Republic became Wojciech Jaruzelski (not without a clear support of the Americans) and on August 2nd Czesław Kiszczak was appointed as the PM. However, these were the last signs of life of communism in Poland. On August 24th, the first non-communist Prime Minister of the Polish People’s Republic became Tadeusz Mazowiecki. The avalanche of history accelerated.