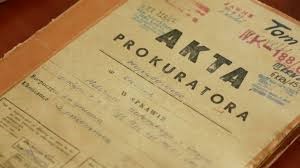 Author: Marzena Grosicka 26.05.2020
Soldiers! A time of ruthless fight against the Communist regime is near. (…) The Army of Free Europe (AWE) has a noble task ahead of it – to liberate the Homeland from the Bolshevik slavery. The Bolsheviks have the help of the Polish hands from the Polish United Workers’ Party who gave death sentences for the greatest sons of the Homeland…

The Army of Free Europe was a conspiracy organisation of political-military character which operated between 1954-1960 at the Kielce province. Its goal was “to fight against the Communist regime to liberate the Homeland”. Around 20 people were part of the organisation. It all began with the activities of Melchior Batorski, from the Zamojski region, who was part of the Home Army during the occupation. In 1944, he was heavily wounded in a battle near Radecznica.

On several buildings in Raków, inscriptions appeared on walls, i.e.: “Ruskis be gone. We do not want such allies. Bolsheviks go home!”

When he returned to good health, he moved to the Kielce province and was hired at a post office in Raków (Opatów region). Most probably in 1954, he began the creation of a conspiracy group based on those from the Second World War. Its first member was Walerian Grosicki who was also part of the underground resistance during the occupation, first at the National Armed Forces and then at the Home Army. More members were enlisted from among the citizens of Raków and surrounding areas. In 1955, Melchior Batorski was transferred to work at a post office in Sandomierz, where he began creating new structures of the AWE. The command over the Raków group was taken over by Grosicki.

Members of the organisation printed anti-Communist brochures and leaflets. They also wrote anonymous messages to local activists of the Polish United Workers’ Party. The most spectacular action of the AWE was blowing up a statue in a square in Raków. At first, it was a monument in honour of Józef Piłsudski and soldiers fighting to regain Poland’s independence between 1918-1920. The statue survived the war, but in 1956 it suddenly changed its face.

Members of the organisation printed anti-Communist brochures and leaflets. They also wrote anonymous messages to local activists of the Polish United Workers’ Party. The most spectacular action of the AWE was blowing up a statue in a square in Raków.

The image of Piłsudski and its original plaques were taken down, and a red star was put in their place. This way, it became the symbol of gratitude for the Red Army and Polish-Soviet friendship. Several months after the red star was hanged, in November 1956, members of the AWE from Raków set explosive charges and the star was destroyed. The action was well prepared. The square and surrounding streets were guarded so no accidental pedestrians would walk in on the scene. The blast was quite strong. Window glasses broke in the nearby buildings. Following the operation, the Citizens’ Militia conducted an investigation, witnesses were questioned, but it came to naught, the perpetrators were not found. At the same time, on several buildings in Raków, inscriptions appeared on walls, i.e.:

“Ruskis be gone. We do not want such allies. Bolsheviks go home!”

Anti-Soviet leaflets were distributed as well, encouraging to fight against the system and join the ranks of the secret organisation. Meanwhile, a list of names of the local members of the Polish United Workers’ Party, with threats made towards them, appeared on a poster pillar.

The group is compromised

The group operated for more than five years and the communist repression apparatus did not find its trace, despite the blowing up of the statue or sending anonymous messages to members of the Polish United Workers’ Party.

The first and only operation to get money from the local municipal safe in Trześnia, near Sandomierz, took place on the Christmas Eve in 1959. It was not a success.

To expand its activities, among other things to establish a conspiracy printing house, Batorski intended to gather funds via expropriation. It involved great risks. The first and only operation to get money from the local municipal safe in Trześnia, near Sandomierz, took place on the Christmas Eve in 1959. It was not a success. One of the members of the organisation was shot. Arrests began. At first, only several people were detained and they went through a very brutal questioning. Two months later in February 1960, Melchior Batorski, the founder of AWE, was captured as well. After many years, he recalled:

“There was plenty of beating, torture, gloomy provocations and horrific torment. I was questioned for three days and three nights straight, with a doctor present who kept me awake to prolong the suffering. They even used electricity. When I was unable to answer, they threw me unconscious into a cell. Blood was gushing out from me which they stomped with their shoes. The conversation with the investigative officer was preceded with a terrible beating. I talked, not knowing what I was saying. The investigation took me back to the times before 1956.”

In June 1960, more AWE members were imprisoned. The conspiracy operations conducted since 1954 were uncovered. 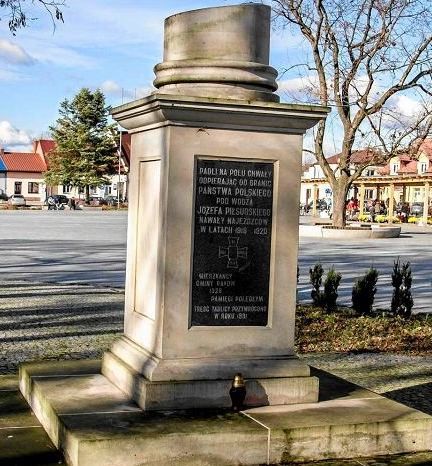 Statue in the square in Raków. Currently renovated, it was blown up by the Army of Free Europe in 1956

The investigation lasted for half a year. 29 people, some of them not even members but helpers of the AWE, were put in the dock. During the trial, two people connected with the organisation died. The investigation was very thorough, a lot of evidence was gathered with expert analyses of the material evidence.

Walerian Grosicki was not sentenced at all in the trial, as he was tortured so badly during the questioning that he ended up in a hospital and was treated for a very long time.

More than 150 witnesses were questioned. The trial itself lasted 29 days, and the verdict was given as late as in January 1962. Batorski, as the founder of the organisation, was sentenced to life in prison. Later, the court lowered the punishment to 15 years in prison, and finally on the basis of a general amnesty to 10 years. The other AWE members received between a few to a few dozen years imprisonment. Walerian Grosicki was not sentenced at all in the trial, as he was tortured so badly during the questioning that he ended up in a hospital and was treated for a very long time. In the indictment, it was written that in the current state of health he cannot take any legal responsibility. He returned home in 1963 as a man totally wrecked psychologically.

The high sentences, so the time spent in prisons, left a huge mark on the lives of people who, as part of the AWE organisation, tried to fight the communist regime. Even after they finished their punishments, they struggled to find jobs, they were invigilated and described as criminals. The fight for freedom was a very painful experience for them. Perhaps, their activities were doomed to fail at the time, but they were the living proof that Poles never came to terms with the loss of independence. Even in small towns and villages, there were people who wanted to give their all for true freedom.