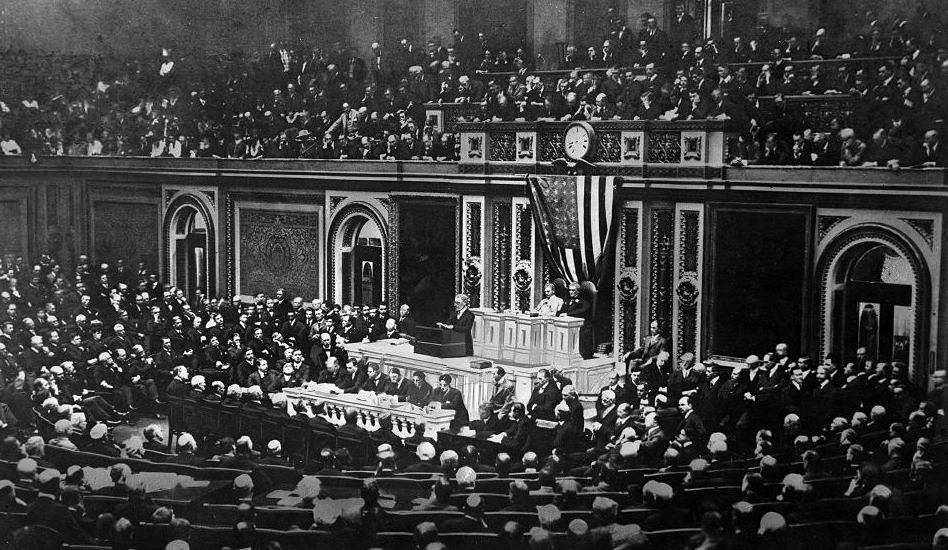 The Fourteen Points Speech. A plan for the world, a sign of hope for Poland

Author: JAROSŁAW TĘSIOROWSKI 30.05.2020
President Wilson’s address to a joint session of the United States Congress included a peace program regarding the world war that had been going on for three years. It was an offer which was ground-breaking in many ways.

Although the vision of the post-war order concerned mainly Europe where the First World War had been taking a bloody toll, it was formulated by an American politician, the leader of the country which joined the fight only a few months prior. For Poles, treated instrumentally by the occupying powers, the postulate of an independent state was of huge significance. One of the most important sides of the conflict proclaimed restoration of free Poland to be one of the conditions for ending the war.

“An independent Polish state should be erected which should include the territories inhabited by indisputably Polish populations, which should be assured a free and secure access to the sea, and whose political and economic independence and territorial integrity should be guaranteed by international covenant.”

With these words, on January 8th 1918, the 28th president of the United States addressed the American Congress presenting his solution to the so-called Polish question. This stance was part of a wide peace plan, consisting of fourteen points, describing the proposition of the post-war order.

Not only the military, but also the political engagement of the United States of America in the external matters, especially European ones, was very limited for the next decades due to the doctrine of isolationism, meaning the restraint of the US in engaging in conflicts which didn’t affect it directly. The rule, defined already by the end of Washington’s presidency (1796), had already been modified for more than a hundred years due to the development and territorial growth of the United States. Already in 1823, it adopted the form of the famous Monroe Doctrine. Its name derived from the name of the fifth president who – sustaining the notion of not engaging in wars between European states – described the territories of both Americas as especially important for the position and security of the United States, which de facto meant considering the majority of the New World as the US area of influence. 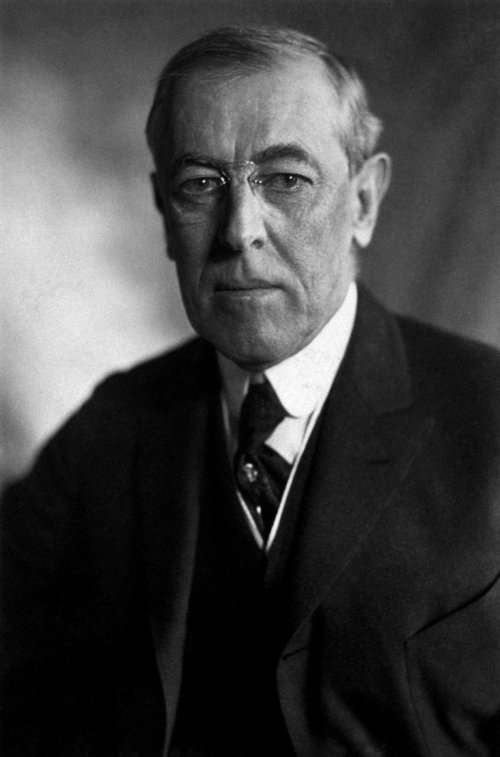 The following decades brought new interpretations of the Monroe Doctrine, which could be exemplified by the policies led by the 26th US President, Frank Theodore Roosevelt. When in 1914 war broke out in Europe, isolationism wasn’t such a fundamental rule for American activities; however – especially in declarations – it was still present.

In the beginning of the First World War, the USA declared neutrality, keeping the diplomatic and trade relations with both sides of the conflict. Among the society, sympathy towards England and France was the most prevalent as well as aversion towards the aggressive German policy. The German aggression on the neutral Belgium tipped the scales of American support even more on the side of the Entente.

When in 1914 war broke out in Europe, isolationism wasn’t such a fundamental rule for American activities; however – especially in declarations – it was still present.

A crucial moment was the sinking of the transatlantic steamship Lusitania by a German submarine in May 1915 which resulted in the deaths of 1198 people, including many US citizens. From that moment on, the atmosphere among the American citizens was distinctly anti-German; pro-war slogans also grew in popularity.

At first, Woodrow Wilson was the supporter of neutrality and praised the idea of “splendid isolation”, yet in time he changed his mind and pushed for the United States to engage in the conflict, in the beginning as an arbitrator and mediator. However, as a result of the events taking place in Europe and the shift in the views of the American society, he decided to join the war. The interception of a certain telegram was also very important in all this…

On January 16th 1917, Germany sent a decrypted message to the Mexican authorities. It promised them financial support in exchange for backing the Central Powers, waging war on the USA and, by doing so, stopping the American plans to join the fight in the Old Continent. In this context, the government in Berlin presented the southern neighbour of the US the possibility of regaining the territories lost by Mexico (New Mexico, Texas and Arizona). Only one response of the American leader was possible – joining the war on the Entente side.

The decision was backed by Congress, first by severing the diplomatic relations with Germany (February 3rd 1917) and then by formally waging war (April 6th 1917) and sending troops to Europe, where they joined the fight after several months (in its peak time counting more than two million soldiers in the field).

The fact that the American troops came to Europe had huge importance not only in military terms, but also highly improved the morale among the allies who were exhausted with the trench war which had already lasted three years. From a strategic standpoint, the USA joining the war effort substantially raised the Entente’s chances to win. 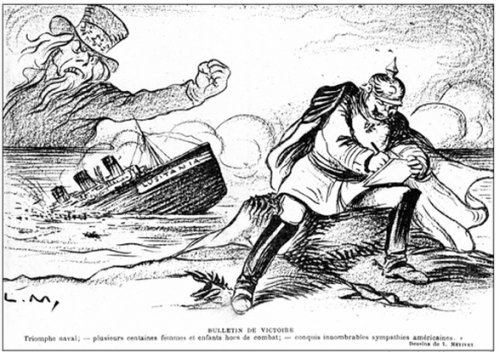 French caricature created after the sinking of the “Lusitania” steamship, symbolising the American anger reaching across the Atlantic 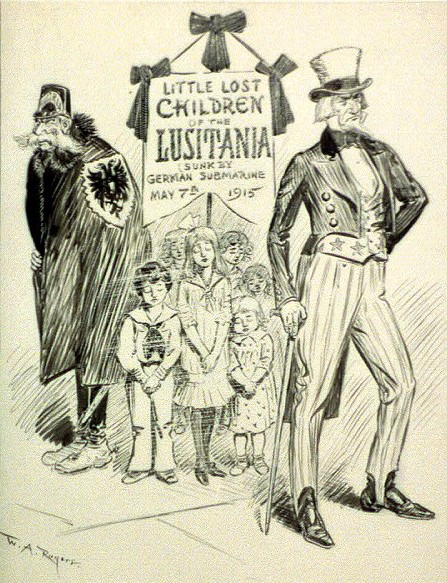 American caricature created after the sinking of the “Lusitania” steamship, referring to the voices of the supporters of the USA joining the war who accused president Wilson of indifference to the tragic fate of the victims of the torpedoing of the ship

War goals of the USA

While the goals and interests of the European participants of the conflict were clearly defined, the plans and expectations of the new participant in the war were much more difficult to establish. The American politicians knew that the social support for the engagement in Europe could very well turn out to be temporary. Given this situation, Wilson decided to present his definition of the new, post-war order, which was America’s voice on the terms of ending the conflict.

The fact that the American troops came to Europe had huge importance not only in military terms, but also highly improved the morale among the allies who were exhausted with the trench war which had already lasted three years. From a strategic standpoint, the USA joining the war effort substantially raised the Entente’s chances to win.

Wilson’s program consisted of fourteen points. The first five concerned the general international relations, among others, the public and open leading of diplomatic actions, forbidding of secret deals and treaties, the freedom of travel by sea and freedom of trade. Wilson also called for equal access to trade for all nations and for mutual armament control between countries. The next points concerned specific states and disputed territories (Russia, Belgium, Italy, Alsace, Lorraine, Turkey, the Baltic states and other nations living in Austria-Hungary) and included concrete propositions of regulating the matters connected with them. In the last point, the president of the USA suggested creating the League of Nations as an international institution – a world-wide tool for securing the territorial integrity of all countries and their peaceful coexistence.


A voice on Poland

In the thirteenth point of his speech, Wilson focused entirely on Poland stating that an independent Polish state should be erected at the areas where Poles lived, with access to the Baltic sea, which was to be guaranteed by an appropriate international deal.

The thirteenth postulate was unique compared to others for two reasons. Firstly, it was the only one referring to a state non-existent at the time and describing an undisputable need for its recreation. Secondly, it was emphasized with a requirement of a special international agreement which would guarantee territorial integrity for the reborn Poland.

In the thirteenth point of his speech, Wilson focused entirely on Poland stating that an independent Polish state should be erected at the areas where Poles lived, with access to the Baltic sea, which was to be guaranteed by an appropriate international deal.

Thanks to that clear and publicly expressed declaration, the Polish question became an obvious war goal of one the sides of the conflict. The goal which was then easier to articulate and sustain after Russia pulled back from the fighting and its authorities – both after the February and Bolshevik revolutions – recognised Poland’s right to independent existence. In this situation, no other Entente country (neither Great Britain, France, USA nor Italy) had any territorial interests in opposition to the idea of the sovereign Poland. The new state would actually lessen the positions of the war enemies of the Allies, namely Austria-Hungary and Germany and also, to some degree, would be a security measure against the unpredictable Bolshevik Russia.

There are many reasons why Wilson decided to express such a firm postulate regarding the Polish matter. Regardless of the internal calculations and hope on the support of the American diaspora as well as geopolitical strategies based on creating new state organisms sympathising with the USA in Europe, one cannot omit the enormous influence of one individual on president Wilson’s international views. The individual in question was Ignacy Jan Paderewski – a genius pianist and composer whose position came both from his huge popularity as an artist and his discreet, backstage but effective influence on the American elites. Paderewski’s relations with Wilson were very close and backed by the composer’s friendship with the president’s advisor, Edward House. The amazing virtuoso never seized to solicit for Poland’s interests in the White House and Capitol.

By the political criteria of those times, the program presented by Woodrow Wilson to the Congress could be described as the peace terms of the USA. The plan in a way became a symbol of the positive goals for which the Allies fought for four years on many fronts, goals which were much more noble than the particular interests of individual European powers. It not only painted a clear picture of the expected post-war order, but was also a fair securing of interests of individual countries, as well as it encouraged to take specific actions which were to prevent another war. 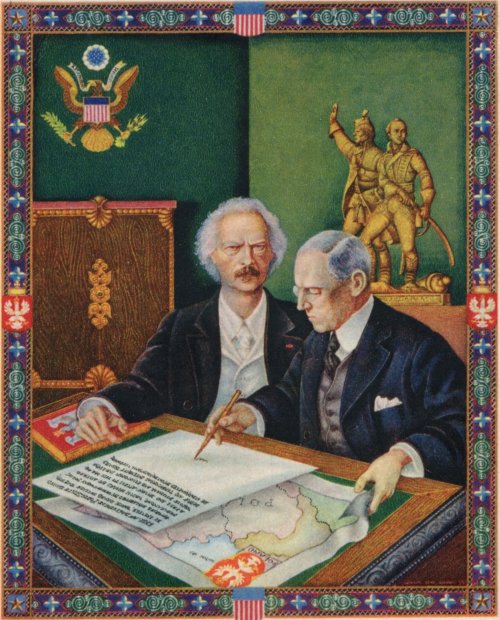 While most of the postulates and propositions included in Wilson’s speech later came to life as a result of the events in Europe, expressed in the Versailles Treaty and other international agreements, the last and most important project – the erecting of the League of Nations – failed.

By the end of another world war, the world powers returned to the Wilson idea of establishing an international cooperation forum, taking direct inspiration from the League of Nations and creating the United Nations.

First of all, due to the disagreement of the president and Congress which had a final say on the matter, the United States did not join the organisation. What’s more, the aspirations and ambitions of individual countries, especially those which lost in the year 1918, turned out to be so strong that, after 20 years, they once again pushed the world to a bloody conflict and the mechanism which was supposed to prevent exactly that – which was Wilson’s main goal – proved to be entirely ineffective. Nonetheless, by the end of another world war, the world powers returned to Wilson’s idea of establishing an international cooperation forum, taking direct inspiration from the League of Nations and creating the United Nations. Regardless of how the organisation faired for the next decades of its existence, Wilson’s concept was the first and so far the only clear idea for the cooperation of all the nations of the world.

The speech from January 8th 1918 was, without doubt, a significant event in general history and a ground-breaking one for Europe. It changed many Americans’ view on the matters of the rest of the world and showed to the citizens of Europe what was the importance and potential of the USA. From the Polish standpoint, it was an especially important moment, one of the most significant on the road to an Independent Poland.