KL Auschwitz-Birkenau - Investigation of the Institute of National Remembrance

Historical era
(1939-1945) II wojna światowa
Author: Łukasz Gramza, Rafał Leśkiewicz 24.01.2020
Rafał Leśkiewicz, PhD, editor-in-chief of the portal Przystanekhistoria.pl, talks about the investigation in the Auschwitz-Birkenau case to Łukasz Gramza, prosecutor of the Branch Commission for the Prosecution of Crimes against the Nation of Poland of the Institute of National Remembrance in Krakow.

Rafał Leśkiewicz, PhD: The INR has been conducting proceedings regarding the German concentration camp in Auschwitz for many years. What exactly is this related to?

Prosecutor Łukasz Gramza: The proceedings are aimed at formulating a comprehensive legal assessment of the actions taken by officers of the Third Reich against prisoners of the camp. This assessment must result from factual findings made on the basis and in the form appropriate to classical preparatory proceedings. The investigation is conducted in the manner specified in the Code of Criminal Procedure. The scope of the proceedings does not obviously cover persons who have already been convicted with final convictions for crimes committed in the camp. However, it should be noted that the Commission investigations are separate from typical pre-trial investigations. The most important of these relate to the concentration of special attention on determining the victims and on the full clarification of the circumstances of the case, even if it is known that the perpetrator is dead. Proceedings can then be discontinued only after the implementation of the additional objectives of the investigation specified in the Act on the Institute of National Remembrance.

R.L: How extensive is this procedure, how many witnesses have been questioned so far?

Ł.G.: Evidence of the investigation is collected in over 200 volumes of main files, not including handheld files and attachments. In the course of the proceedings initiated in 2011, nearly 150 people were questioned. There are over 3500 unique protocols for interviewing witnesses in the entire set of files, and it should be noted that some people were heard repeatedly. It is worth remembering that KL Auschwitz-Birkenau was the largest German concentration camp, it fulfilled many functions - a concentration camp in the strict sense, a forced labor camp and an extermination camp. One should not forget that the so-called dozens of sub-camps were subject to the main camp, where prisoners were also kept and where crimes were committed. In the past, a separate investigation was conducted into almost every sub-camp, which significantly hindered the overall criminal law assessment of the camp's activities. Only recently have the dozens of suspended proceedings been merged into one investigation, which should eliminate the risk that some aspects of the camp's activities or some of the crimes committed there will be left without a proper summary. 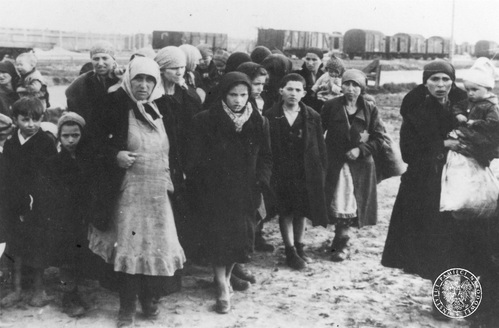 A group of women and children, having arrived to KL Auschwitz-Birkenau, sent to the crematorium after selection, May 1944 Photo: AIPN 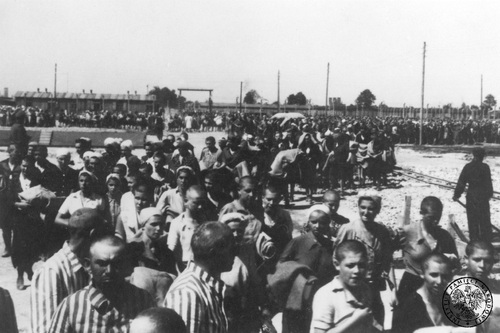 R.L.: What is the most important part of the evidence in these proceedings?

Ł.G.: The most important part of the evidence undoubtedly relates to the testimonies of the witnesses. Documentary evidence is less important for several reasons. Firstly, not all criminal activities were reflected in the documents. For example, based on the documents, you can recreate the transport route and number as well as the number of people sent to extermination as a result of selection. However, individual crimes of camp officers, related, for example, to the use of violent physical violence for alleged "offenses" committed by prisoners can be described practically only on the basis of witness testimonies. Secondly, a large part of the most aggravating documents were destroyed before the evacuation of the camp. Thirdly, the documents remaining in the camp were taken over and largely taken away by the Soviet investigation services. The documents have never been fully made available to the Polish party.

R.L.: To what extent do the findings made by the INR prosecutor's office change the current state of knowledge about the activities of this concentration camp?

Ł.G.: The findings of the investigation are rather a confirmation of information resulting from scientific studies. This does not mean that the files do not contain entirely new elements, including descriptions of events or individual crimes unknown to previous literature. However, the circumstances require verification. 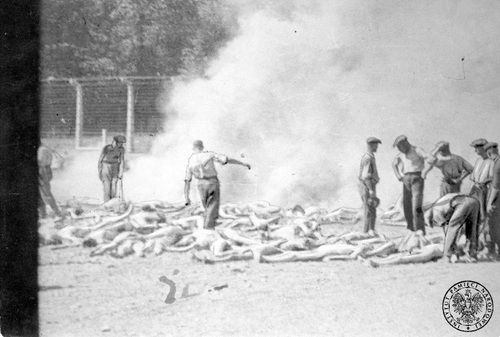 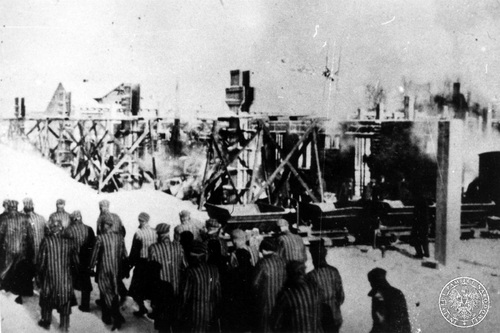 A group of KL Auschwitz prisoners marching in winter in front of a building, 1942-1943 Photo: AIPN

R.L.: Is there any chance to bring anyone responsible for the crimes in this camp to justice?

Ł.G.: In the course of the investigation, the most complete list of SS officers of the camp crew was developed. It enlists 8502 names and is constantly verified and supplemented. The findings allowed the initiation of several criminal proceedings in countries where people identified as SS officers reside. At present, several dozen former crew members may still be alive. Efforts are being made to obtain more detailed information on these persons and to bring them to justice.

R.L.: Can we talk about any conclusions, especially regarding the precise determination of the number of victims?

Ł.G.: In the course of the proceedings, several potentially interesting threads were revealed regarding this issue. The thread of actions taken by those outside the camp and cooperating with the resistance movement of the Home Army unit is particularly interesting. They forwarded reports to the headquarters containing lists of the number of camp victims. The lists could have become the basis for developing reports of the Polish Underground State submitted to the Government of the Republic of Poland in Exile and the Western Allies. Only after their full explanation will it be possible to state whether and to what extent they affect the findings on the number of camp victims.

R.L.: Thank you for the interview.