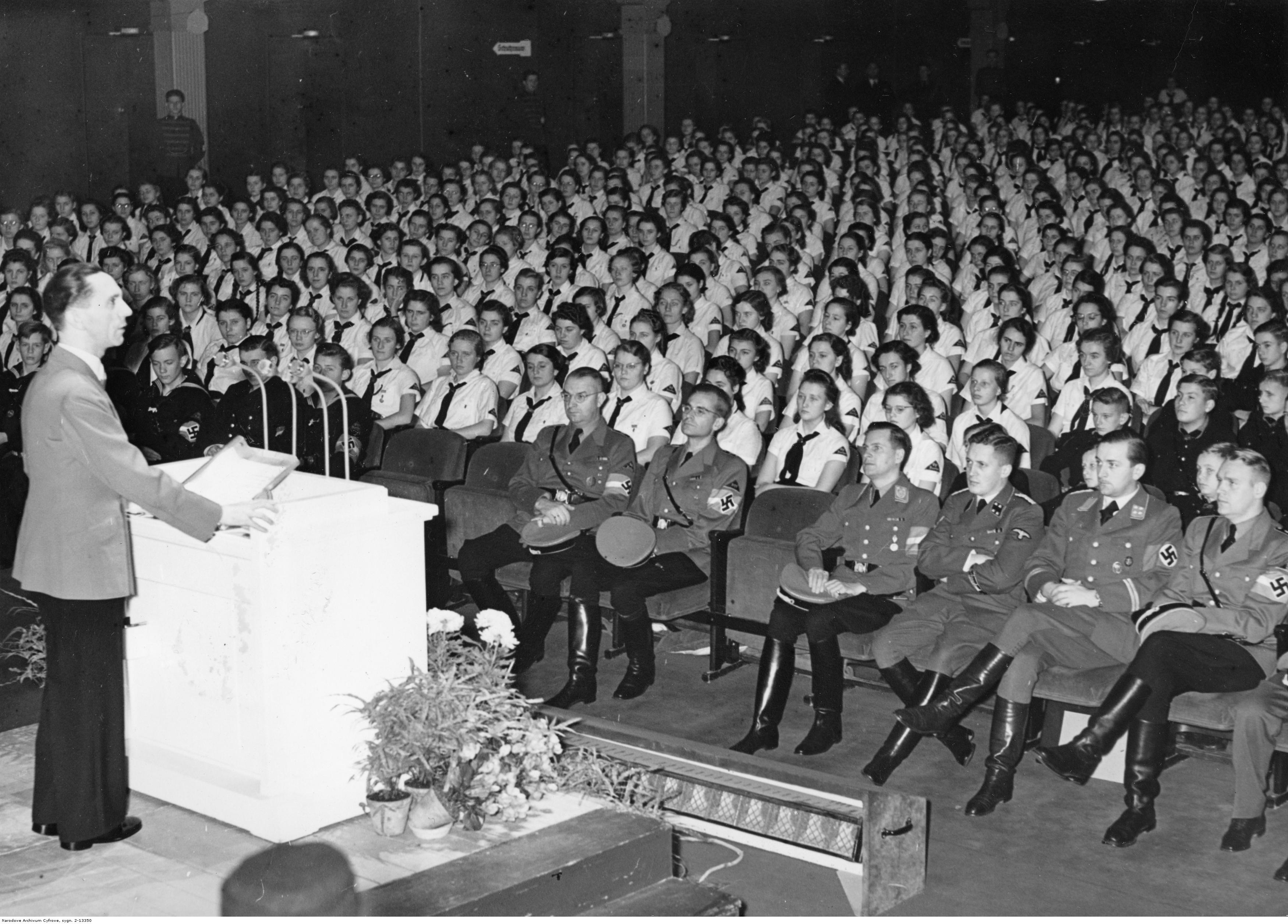 Joseph Goebbels – the propaganda master of the Third Reich

Author: Marcin Przegiętka 01.12.2019
One of the key elements that make up a totalitarian state is indoctrination of an entire society. In the Third Reich, Joseph Goebbels created an elaborate propaganda system, which allowed him to control all media (the press, radio and cinema) and both literature and art. That way, he could alter the Germans’ thoughts and views.

In 1924 Joseph Goebbels, an unfulfilled and unemployed author,  got interested with a radical, anti-Semite program of the National Socialist German Workers’ Party (NSDAP), which leader, Adolf Hitler, was just on trial for the 1923, November Beer Hall Putsch. Goebbels was fascinated with Hitler himself and the fondness quickly grew to unconditional devotion. Certain that Hitler was fulfilling “God’s plan”, Joseph joined his party and took it upon himself to prepare pamphlets, publish newspapers and take part in party’s gatherings, proving his unprecedented orator skills.

“To all in Germany (…) it must become apparent that to be Polish is to be less than human. Poles, Jews and Gypsies are all at the same level of human imperfection.”

“We will work on people for so long, that they must eventually cave”

A breakthrough in Goebbels’ career was, without doubt, the moment he became promoted to Gauleiter of the NSDAP (the party leader of a regional branch of the Nazi Party – translator’s note) in Berlin, in 1926. He then managed to popularise the main ideas of the Nazi Party in the “red” capital of Germany, where the left-wing parties originally had more support. Even though, two years later the NSDAP failed to get much support in the parliamentary elections, Goebbels managed to become an MP. Since that moment, he had immunity and a free ride ticket (allowing him to use public transport without charge – editor’s note), which allowed him to take part in party gatherings all across the country. In the last years of existence of the Weimar Republic, during a time of great crisis for the country, political arguments became very brutal. Fights between parties’ militias and political assassinations became an everyday reality. Goebbels felt just in place in this atmosphere: both his public speeches and published articles tilted towards more radical way of thinking. He couldn’t control his pure hatred towards Jews and left-wing parties.

When in 1933 Hitler was forming his government, Goebbels, the head of propaganda for the NSDAP, became a minister of propaganda. The Nazi Party took control not only of the parliament or Reichstag, but also of the media. Goebbels was clear in his message to the directors of Berlin radio stations: “We won’t pretend: the radio belongs to us and to no one else! We will make the radio a tool for our cause and no other values will be presented by it.” People with “inappropriate” views (socialists, Communists, pacifists) or of “inappropriate” origin (Jews) were removed from radio stations. The same was done to the press. Opposition newspapers were eradicated and their editors were sent to concentration camps. 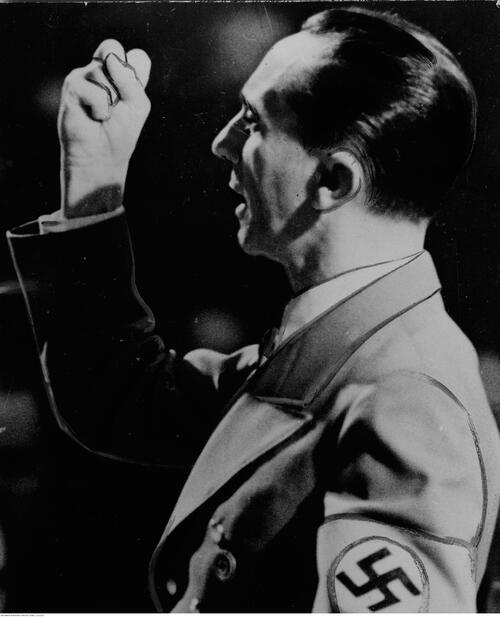 Joseph Goebbels gives a speech to the citizens of Berlin, June 1943 (NAC) 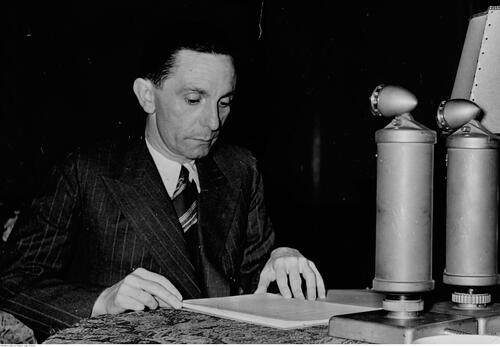 Goebbels forbid the German society from listening to foreign broadcasts or repeating them, under the threat of death. Therefore, the Nazi Germany was a country, which had the monopoly on state-wide news; there was no alternative.

Propaganda as a tool for indoctrination

The German press received instructions from the ministry, which information to publish (and how to comment on them) and which to omit. From that moment, Goebbels had full control over all the public means of expression, which became propaganda tools. With such tools, it was easy to fuel the hatred of the German society towards the internal and external enemies of the Third Reich: Jews; Communists; socialists; Catholics; Romani; Poles; Western allies; and the USSR. To vilify them as much as possible, the ministry of propaganda used the radio, film, literature and art, so as no one would even dare question their credibility. Following the outbreak of the Second World War, Goebbels forbid the German society from listening to foreign broadcasts or repeating them, under the threat of death. Therefore, the Nazi Germany was a country, which had the monopoly on state-wide news; there was no alternative.

It was propaganda, that prepared the Germans for the outbreak of the war and for the Holocaust. It called for genuine dedication on the front and justified war crimes committed by the most violent cogs of the regime’s machine. It was propaganda, that kept up the German spirits following the defeat of Wehrmacht in the battle of Stalingrad, 1943 when Goebbels announced the beginning of the “total war”. The same role played the rumours about the “Wunderwaffe” or “miracle weapon” which was allegedly supposed to turn the tide of war and bring final victory to the Third Reich. Film, theatre, music and literature – all were under the influence of Joseph Goebbels. In May of 1933, he organised a manifestation in Berlin and several other cities, where he ordered the burning down of books written by forbidden authors. Four years later, the minister of propaganda set out on his crusade against “the degenerate art”.

Goebbels’ passion was, without doubt, orchestrating grand state celebrations and official ceremonies of the Nazi Party. He demanded, that they would be monumental and filled with NSDAP symbols, but also carried out with mysticism and sublimity. He valued marches, processions with torches, great gatherings and epic, dramatic speeches. It enabled him to create and cultivate the German “national community”, from the beginning excluding all its political and racial enemies. 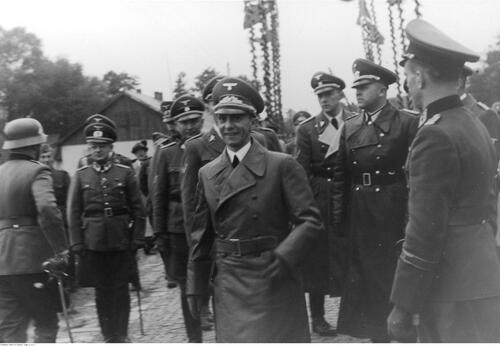 Joseph Goebbels (in the foreground wearing a coat) upon arriving to the General Government for the first anniversary of the outbreak of war, September 1st 1940 (NAC) 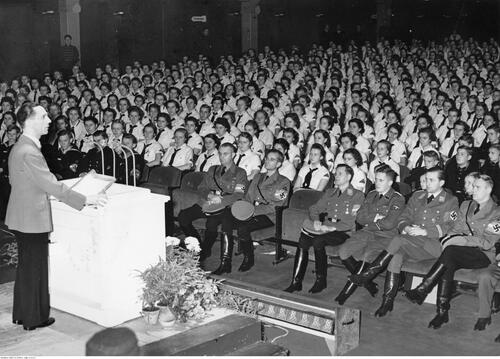 Minister of propaganda of the Third Reich, Joseph Goebbels gives a speech at Ufa-Palast during the “Youth film days”, November 1939 (NAC)

Joseph Goebbels knew the scale of Holocaust and was its advocate. He wrote this about murdering Jews in 1942, at the Lubelszczyzna district of occupied Poland: “There won’t be much left of the Jews. Generally speaking, you could say, that 60% of them needs to be eradicated, and only 40% will be used for labour.”

Propaganda in the service of crime

How influential the propaganda of the Third Reich was, can be shown on the example of the events of the Kristallnacht or Night of Broken Glass, which took place in November, 1938. After Goebbels initiated a country-wide hunt for Jews, anti-Semite riots broke out across entire Germany. In autumn of 1939, his machine of lies and deceit released false information, that 58 000 Volksdeutsche or Ethnic Germans were murdered by Poles. For the Third Reich it was an excuse it needed to bring bloody vengeance to the Polish intelligentsia. The infamous minister of propaganda wrote for the German press: “to all in Germany (…) it must become apparent that to be Polish is to be less than human. Poles, Jews and Gypsies are all at the same level of human imperfection.”

After Goebbels visited the city of Łódź, he said this about the Jews: “They are no longer people, they are animals. The task that awaits us is therefore no longer a humanitarian one, but a surgical one.” Joseph Goebbels knew the scale of Holocaust and was its advocate. He wrote this about murdering Jews in 1942, at the Lubelszczyzna district of occupied Poland: “There won’t be much left of the Jews. Generally speaking, you could say, that 60% of them needs to be eradicated, and only 40% will be used for labour.” Goebbels’ cynicism was further proved, when he used the discovery of mass graves of the Polish officers in Katyń, in 1943 to back his anti-Soviet and anti-Semite propaganda.